Inspiration for an entire generation 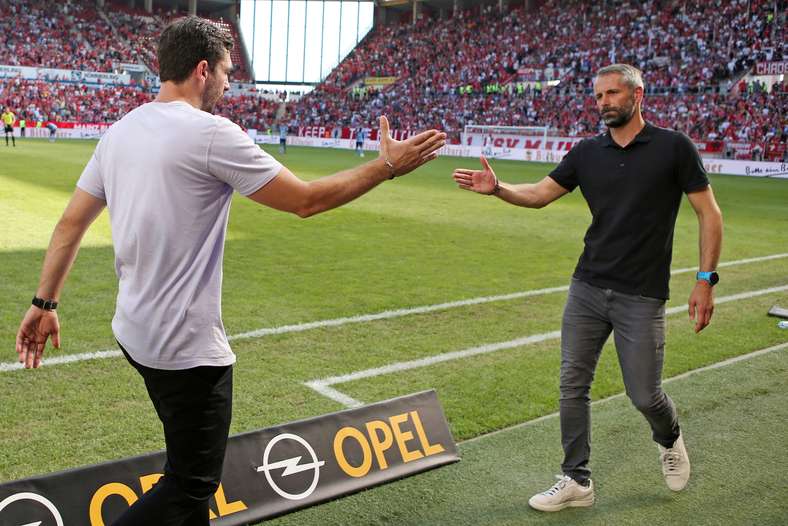 Former teammates Sandro Schwarz and Marco Rose reunited on the touchlines in the OPEL ARENA in August 2019 as head coaches of Mainz 05 and Borussia Mönchengladbach respectively.

Mainz are staying at home. So, we’re taking this time to look back at some of the most important moments in our club’s history. Today, we’re highlighting the generation of Zerofivers who were inspired to take up the mantle of head coach after their playing careers came to an end by one man: revolutionary head coach, Wolfgang Frank. One of the most well-known Zerofivers to do so is, of course, club legend Jürgen Klopp, the current FIFA Coach of the Year.

On a Wednesday evening in mid-May in 1996, Mainz won 3-0 away in a second-division match against Chemnitzer FC. The victory marked an important step towards the club successfully ensuring its survival that season. Head coach Frank had managed to transform a team that was a prime relegation candidate into a side that recorded the best overall record during the 1995/96 Rückrunde. In the Mainz starting line up back then was goalkeeper Dimo Wache, supported by a back four of Torsten Lieberknecht, Michael Müller, Peter Neustädter and Uwe Stöver. The Mainz midfield was made up of Abderrahim Ouakili, Bruno Akrapovic, Lars Schmidt and Christian Hock, with Sven Demandt and Thomas Ziemar in attack. With the exception of Ouakili, every member of this line-up later went to become a coach. Jürgen Klopp, who was subbed on at halftime for Stöver, would even go on to become one of the most famous coaches in the world.

“The best I ever had”

All these aforementioned players, who were active at the Bruchweg in the 1990s - including Sandro Schwarz, Thomas Zampach, Helgi Kolvidsson, Jürgen Kramny, Zeljko Buvac, Adrian Spyrka, Christian Hock or Stephan Kuhnert, the current FSV goalkeeping coach - were heavily influenced by Wolfgang Frank.

“I had had several head coaches by that point,” Sven Demandt is quoted as saying in the book Karneval am Bruchweg, as he looked back on Frank’s first years in Mainz. “From purely a footballing aspect, Frank was the best one that I ever had. Everything that we do as coaches was heavily influenced by him. Frank was the first coach I ever had who really had a set plan for how the team should play. You could already recognise in training that it was working.” Frank, the book goes on to mention, “was a round-the-clock head coach, tactician and motivator. His successors at Mainz would state that they failed because Frank’s creativity and his firmly established way of playing and thinking were heavily ingrained at the club. The first Mainz coach to taste success at the club was Frank’s pupil, Jürgen Klopp, after he took over the reins as head coach.”

Klopp would later often say that he had a plan of what needed to be done right from the start of his first training session as head coach at the Bruchweg. In his first team meeting, a young Klopp adapted principles from several of Frank’s past speeches. Frank himself had also openly stated that Klopp had a bright future as a head coach ahead of him. “Kloppo lived and breathed football. He was always on the ball and you could see that he had the capacities to be a head coach early on.”

“I can also do that”

Klopp, who would go on to lead the Zerofivers to their first-ever Bundesliga season, would later admit, as stated in Karneval am Bruchweg, that he could already picture himself coaching at Mainz 05 during his playing days. From Karneval am Bruchweg: “I thought about it often, in the manner of ‘I can also do that.’ I never fully thought it through, but I always had an idea of what was going wrong and how you could fix it.” As a player, Klopp has said that he was always happy to be chosen to play, but that he had the feeling that it could all be over soon. “As a coach, I always thought “I can do this.’ ”

In addition to Klopp, Schwarz, Marco Rose, Lieberknecht and David Wagner would all go on to careers as head coaches in the Bundesliga. Kramny would also go on to have a career on the sidelines, coaching the Mainz U19s among others, as well as VfB Stuttgart in the 3. Liga and eventually in the Bundesliga. “From the Mainz squad at that time there were several who stood out and who learned a lot. We really needed to surround ourselves with football everyday, whether it was in practice or in theory. Of course, this also solidified it in our own thoughts. We had to learn a lot, which you could also apply as a head coach,” said Kramny. “The basic principles of a back-four was something we practiced over and over again. We did video analysis, and spent a lot of time looking at tactics on a board. Constant repetition. That’s what Frank continuously preached.”

Schwarz, who coached the Zerofivers until the end of 2019, names Frank, who passed away in 2013,  as one of his first great coaching influences, while also mentioning the impact Klopp and Thomas Tuchel had on him. “In my early 20s I was already thinking that this would be something I would enjoy doing. Michael Thurk, my roommate at the time, was always wondering what I was taking notes on. I was already taking notes back then. Whenever my wife and I moved during the last few years, I would pick up that notebook again and page through it. From the principles that are written down in there, pretty much everything still applies today,” Schwarz said in an interview with FAZ. He would add that he would never be able to forget Frank. “He had these beliefs that he would hammer into us - that’s stuff that I will never forget for the rest of my life.” That includes phrases such as “Faith leads to action, concentration leads to success, repetition leads to mastery."

All of Klopp’s football knowledge

Back then, Schwarz shared an apartment in Mainz with current Gladbach head coach, Marco Rose. Discussions about the inner workings of football were daily occurrences. Rose drew inspiration from Klopp and Tuchel, but was also a student of Ralf Rangnick at Hannover 96, the club he would join from Mainz.

David Wagner, who played for Mainz until 1995 and the current head coach of Schalke 04, did not learn his trade from Frank. However, Wagner has maintained a long-time friendship with Klopp. As a head coach at Huddersfield Town, Wagner told the BBC how he benefited from Klopp’s guidance during his time as coach of the Borussia Dortmund U23s. “I was always allowed to take part in Klopp’s training sessions; he was an open book for me and shared a wealth of footballing knowledge with me. We like the same style of football: high intensity, passionate and demanding.” These are the founding principles of a philosophy that continues to guide Mainz 05 to this day.