"I thought the atmosphere was simply fantastic"

Mainz accept their goalless draw at home to Schalke, despite having the lion's share of the chances. 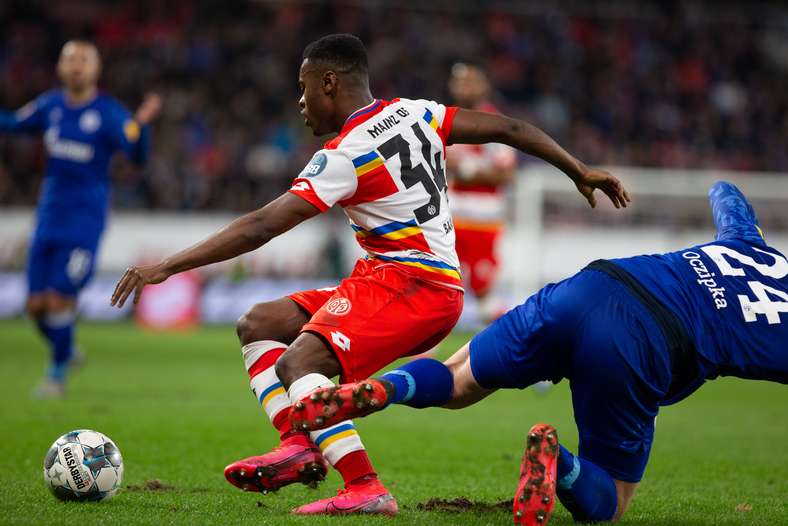 It took until the 22nd matchday in the Bundesliga for Mainz 05 to record their first draw of the 2019/20 season. The chances were there to win against Schalke, but Achim Beierlorzer’s team also needed a bit of luck in the final moments of the carnival game to come away with a 0-0 draw. “It’s a huge point, and a learning process to be happy with the draw,” Rouven Schröder said about the result. “We put a point on the board, and now we have one more than we took from the first four games in the Hinrunde.”

In that legendary 1995/96 season in the 2 Liga, Wolfgang Frank had at first lamented only taking a point at home against VfL Wolfsburg; “who knows what this point is good for.” Mainz were in last place at the time. Seven games later, the Zerofivers wrote a unique story of survival in the second tier.

After FSV’s competition in the relegation battle suffered defeats over the weekend, the Zerofivers would have wanted a win to further distance themselves from the dropzone. “We really wanted points and to string together a good run of results. Four points between us and relegation is good, five is better, but seven would’ve been best,” said the Mainz head coach. “We clearly had the better chances to win. But we have to accept the draw,” said Beierlorzer in his typically frank manner. “If we can’t get anything going on the front foot, then we have to keep a clean sheet. There are now five points between us and the bottom three. We want to continue working in this manner.”

Schalke head coach David Wagner, himself a former Mainz striker, saw it as an extremely intense football match, in which it was tough to create chances. Wagner said that his team had earned a point after the big chance in the 91st minute. For the first time in the match, the FSV back line lost concentration and afforded Weston McKennie the chance to win the game for his side.

“From the bench, it looked like trouble when he met the header,” said the Mainz sporting director, who was likely having flashbacks about that late goal conceded at home to Leverkusen. Apart from this one shaky moment, Schröder said that Beierlorzer had set up his defence very well. According to Schröder, the team has made a lot of progress in this regard. “They’ve become solid at the back and don’t concede as many chances. That’ll be important for the coming matches,” said Beierlorzer. “We need all the players to play for each other, make runs, close the gaps, and make it tough for our opponents to play football. Schalke tried a lot of things in order to tempt us out, but the defence held together nicely.”

“I thought the atmosphere was fantastic”

The 52-year-old opted not to start more offensive players, such as jean-Philippe Mateta and Jean-Paul Boëtius, for just this reason. “It’s not about individuals, it’s about Mainz 05. No player is bigger than the collective,” Beierlorzer said. “We’re playing with a striker and two inside forwards, but we’re not using a number ten. It’s so important that we’re strong defensively right now. Because that’s the key to success. It wasn’t even the case that we had no chances. They were there, so the plan worked.”

Before half time, Danny Latza had the game’s biggest chance. Robin Quaison later hit the bar as well. “We’ve got the power, and it would’ve been great to get the goal,” said the Zerofivers’ boss. Michael Gregoritsch had a great chance for Schalke, but Zentner denied him. “It’s hard to completely keep out a team like this,” said Beierlorzer, who showed his appreciation for the Mainz supporters in the stands. “I thought the atmosphere was simply fantastic,” he explained. Beierlorzer said that he had spoken to his players about the carnival game and the ceremony around the match. “For clubs that have nothing to do with it, it can be a bit odd to put on striped socks and celebrate carnival. But our fans pushed us on, we really felt the great support.”