Looking back at the homegrown talents and future German internationals to have come out of the Mainz youth academy, as well as a glimpse at current talents at the club. 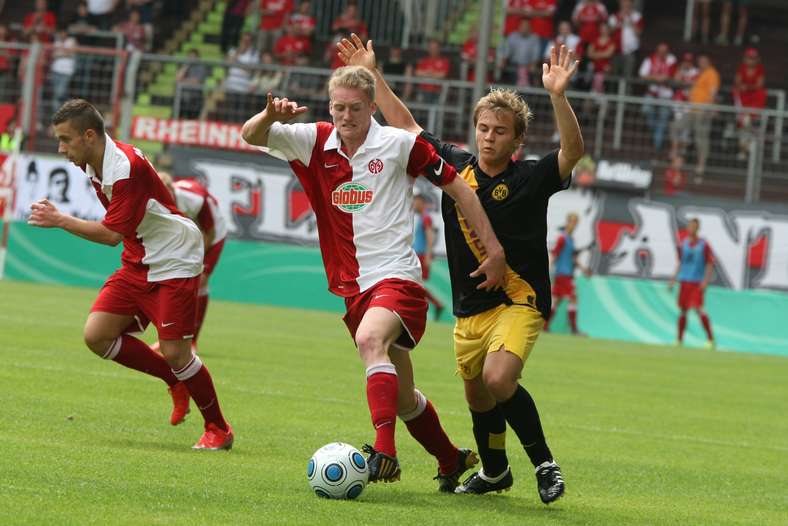 André Schürrle led the Zerofiver U19s to their first, and so far only, Youth DFB-Pokal title in 2009.

Mainz are staying at home. So, we decided to use this time to take you through some of the most important events in our club’s history. Today we’re looking back on some of the homegrown talents who came up through the Mainz academy, two of whom later went on to become World champions.

On a Sunday morning at the end of June 2009, two footballers crossed paths for the first time in the Bruchwegstadion. Six years later, the pair would be celebrating Germany’s fourth World Cup title in front of 75,000 fans in the Maracaña Stadium in Rio de Janeiro. It would also be the first time a European side won a World Cup in the Americas. The match went into extra time, where André Schürrle dribbled down the left wing before playing in a cross that found the foot of Mario Götze. The striker made no mistake, burying his shot in the back of the net and securing the title for Germany.

A debut for two Zerofivers

On that June morning in 2009, Schürrle and Götze were facing each other in the final of the Youth DFB-Pokal at the Bruchweg. In the end, Mainz would defeat Borussia Dortmund by a score of 2-1. A year later, Schürrle would make his senior debut for Germany under Joachim Löw, as he came on to replace fellow Zerofiver Lewis Holtby, who was also making his debut that day against Sweden (0-0). Götze would also pick up his first senior cap that day, coming on to replace Kevin Großkreuz.

In total, four players went on to become German internationals during their time at Mainz. Two of them - Holtby and Nicolai Müller - had come from other clubs. Schürrle and Manuel Friedrich (the first Zerofiver to progress to the national team while at the club) were both products of the Mainz academy. Suat Serdar also belongs in this category, however he would only go on to win his first Germany cap after transferring to Schalke 04. Erik Durm, who played for the Mainz U19s and U23s, and was also included in Löw’s World Cup 2014 squad, can also be counted towards this tally of homegrown talents who went on to play for Germany.

From the U18s to the national team

Friedrich, a key figure in helping Mainz win promotion to the Bundesliga, is also the son of Hubert Friedrich, the former director of the Mainz academy. However, Friedrich nearly didn’t make it as a professional footballer, after the club was hesitant to promote him from the U18s to the U19s. He would play for the U18s before featuring for the U19s in the fifth division. Friedrich made his first-team debut in early 2000 in Bundesliga 2, and became a regular starter under head coach René Vandereycken. With Jürgen Klopp as head coach, Friedrich developed into a stellar second-division player. He was an all-round solid defender, who was strong both in the air and in challenges. At the same time, he was a play-maker of sorts, who would pop up in attack on occasion, netting eight goals during that time.

The defensive stalwart would then transfer to Bremen, where he suffered two cruciate ligament tears. Following his return in winter 2003/04, Friedrich would go on to make 99 Bundesliga appearances for Mainz to go along with the 157 he made while at Bremen, Leverkusen and Dortmund. In 2005, Friedrich made his debut for Germany.

Schürrle joined the Mainz U17s from Ludwigshafener SC as a 15 year old in 2006. In his second Bundesliga season under head coach Thomas Tuchel, Schürrle would set a club record by netting 15 goals and providing five assists (level with Shinji Okazaki). A typical goal for Schürrle looked like this: a quick solo run down the left wing, a cut back at the edge of the box to shake off his defender, followed by a shot into the top corner. Since his days at the Bruchweg, Schürrle has transferred clubs several times, with big sums involved each time.

It was at this time that Rouven Schröder joined Mainz 05. The sporting director oversaw Suat Serdar’s development, as well as Leandro Barreiro’s recent progression to a first-team regular. At just 20 years of age, Barreiro has already made 18 appearances for Luxembourg’s senior national side. “You can see and feel what kind of a profile and character a player has, as well as their potential,” said Schröder. “What was striking about Suat was the way in which he worked to fit in, while always knowing that he had to work hard. You could see that there were several areas that he still needed to work on, such as his athleticism and robustness, but he continuously improved. He is making his way with his sense of empathy and down-to-earth attitude. The fact that we were able to guide him on his way makes us proud.”

With Luxembourg, Barreiro was able to pick up international experience early on in his career against other top teams. “That was a bit of security for him. He was patient, worked hard and always believed he’d get a chance. Leo’s ability to speak multiple languages also means that he’s often the one to help bring the group together,” said Schröder.

From the academy to the Bundesliga

The success of Mainz’s youth academy is proven by a look at the club’s current appearance makers this season. Florian Müller, Robin Zentner, Ridle Baku, Jonathan Burkardt and Barreiro have made a combined 63 Bundesliga appearances this season. Only SC Freiburg have had more academy products appear for them this term, with 65. “It’s proof of the good work done by everyone at the club. It starts with recruitment and scouting, and our academy is doing a fantastic job in this regard. Their collaboration with the first team is running smoothly. We see ourselves as one team that works together,” said Schröder. “It’s important to be able to make that transition. The players bring a certain level of quality to the table, but then you have to  trust them and allow them to play for the first team, and to integrate them into the team. For some, it works immediately, and for others it takes some time. However, you cannot lose patience nor that base of trust. The players also need to be aware of this, understand it and accept it. Overall, it’s about hard work on both sides.”

From Eyibil to Nebel: the next generation waiting in the wings

This season, the club signed Merveille Papela, Niklas Tauer and Erkan Eyibil to professional contracts. All three players from the Mainz U19s could now take the next step in their careers. Paul Nebel is another academy talent that has started to make a name for himself. “You can see that it’s growing,” said Schröder. “It’s a great thing that we’re able to integrate these homegrown talents in our squad. If in the future the budget isn’t what it was in the past, then it will be extremely important to know that players from our own club can make it.”