High-scoring draw in the inter-squad friendly at the Bruchwegstadion 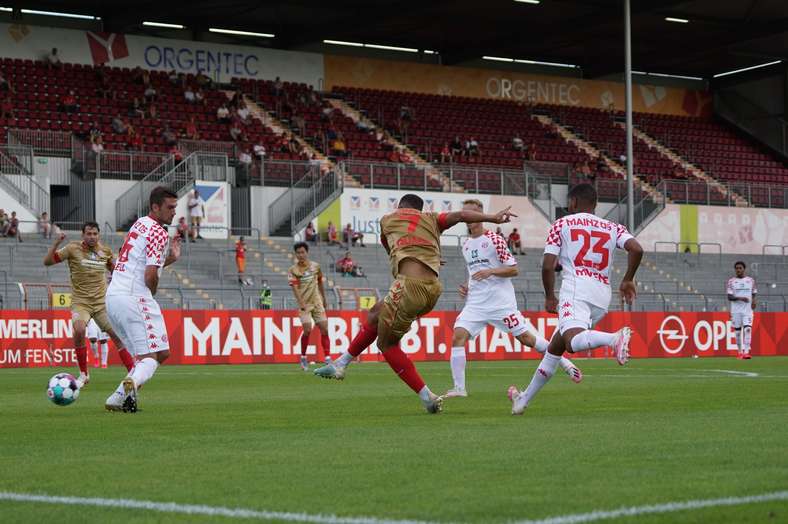 The Zerofivers’ new gold third shirt was worn for the first time.

As a result of a positive coronavirus test in the Mainz squad, the scheduled friendly against VfB Stuttgart was cancelled at the last minute on Wednesday and replaced by another inter-squad friendly. Only ten days after the previous match, two Mainz XIs met once again at midday at the Bruchwegstadion. After two 30-minutes halves, the game ended with a 3-3 scoreline. The Zerofivers’ new gold third shirt was worn for the first time while their opponents wore the new white away kit.

Head coach Achim Beierlorzer sent both teams out in the usual 4-2-3-1 formation and witnessed a flurry of early goals. Team Gold took an early two-goal lead after an own goal from Stefan Bell and Robin Quaison’s strike, before an Abass Issah brace levelled the score after just 20 minutes of play.

In the second half of the entertaining match that was enjoyed by 100 fans, Paul Nebel struck what seemed like a winner for the Team Gold after he was played in by Ridle Baku, firing a powerful right-footed shot beyond Finn Dahmen. The 3-2 lead remained intact until Jean-Philippe Mateta, one day after his apology for last week's misconduct, demonstrated his scoring prowess once again and equalised just before the final whistle.

“All in all, we’ve seen some very good goals. I thought we made the best of the situation today so I’m particularly pleased considering the circumstances. A positive test will naturally play on your mind, but both teams played well and were particularly good going forward,” said the head coach after the game. A second squad coronavirus test took place immediately following the game, with results expected on Thursday morning. “How we proceed this week will depend entirely on those results,” explained Beierlorzer.

How the Zerofivers lined up: