Achim Beierlorzer and Rouven Schröder gave their thoughts in the pre-match press conference. The Zerofivers want to get a result against VfL Wolfsburg and add to the carnival celebrations. 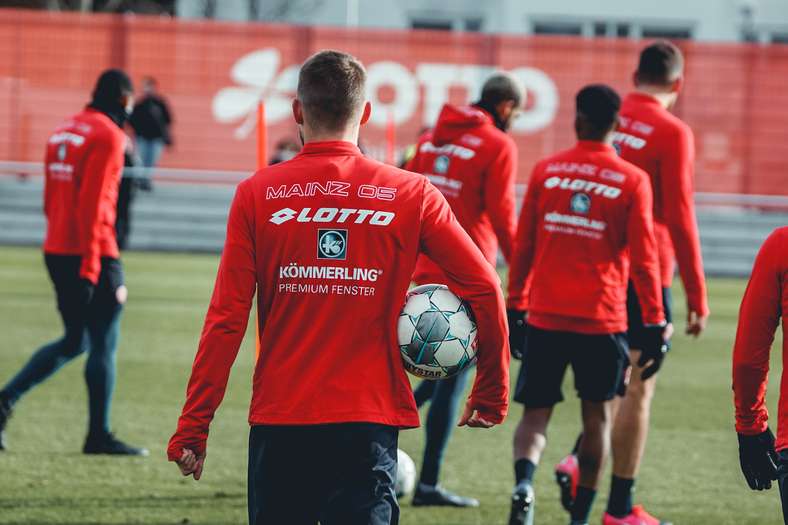 Competition for places is bringing the best out of the players at Bruchweg.

Away from the carnival parades and celebratory mood in Mainz this weekend, the Zerofivers want to add to the party atmosphere in the city by bringing three points back from their trip to Lower Saxony. “We have a job to do. It’s so important that we take every chance we can to pick up points,” Achim Beierlorzer said in his press conference on Friday. “In Wolfsburg, we’ve got an opportunity to add to the four points we’ve picked up in our last two games.”

Of course, the FSV head coach knows that it will not be an easy game against the Wolves, who beat Malmö 2-1 in the Europa League during the week. “They want to win, us too,” said Beierlorzer. “After that, I’m excited at the possibility of doing something with this squad that I’ve never experienced before.” The man from Franconia will take part in his first ever Mainz carnival parade on Rose Monday. The experience on board the parade float will be even better after a point, or three!

Push the opposition to their limits

The coaching staff have been doing intense preparation in anticipation of a difficult duel in the Volkswagen Arena, including taking in the win over the Swedish side on Thursday. They analysed the game and now feel equipped to take on the task at hand. “We’re looking at where Wolfsburg are now; within touching distance of qualifying for Europe. But we know we’ve a good chance to take something from the game, if we stick together and give it our all,” the 52-year-old stated. The goal is to make life difficult for the opposition after their midweek fixture, “because we’re going to push them to their limits, with presence and power.”

Mainz’ new-found defensive stability is touted to be the foundation for success. “It’s been important, we don’t want to have conceded the most goals in the Bundesliga. But that doesn’t mean that we’ll stick everybody behind the ball and press from the back. We need balance, and of course offensive power out wide and up top. Our approach is always to win games; this is entirely possible. We saw this against Hertha, we saw this against Schalke. We´ve got to be solid at the back against Wolfsburg, and then create our chances going forward. That’s the best course of action right now,” explained the Mainz head coach.

Forcing their way into the starting XI

“We don’t need to be afraid of anybody,” said sporting director Rouven Schröder. “The players want to take the next step. On Sunday, we have the chance to build on what’s been done, and to be successful. After a couple of positive results, everyone is happier. They need to know that everything needs to be done in order to win.” Schröder went on to explain that the prospect of coming to the Rose Monday procession with a positive result, or the prospect of coming home matches against Paderborn and Düsseldorf, must spur the team on to big things. “Wolfsburg are of course in the hunt for European football with the squad that they’ve got. That means it’s going to be tough, but not impossible.”

Jeremiah St. Juste remains a doubt to feature against Wolfsburg; the Dutchman is still suffering from a muscle problem. For the Mainz centre back, Sunday could be too soon to make a recovery. “If we have to change it up, we’ll make changes. We’re 100% certain that the team will perform,” Beierlorzer said. He went on to state that he’s been impressed with the way his players have been fighting for a starting berth. “All the players are showing what they’re capable of. We told them that it’s not about individuals, but the whole team. One or two of them have to step back and accept that another player is starting. They need to wait for their chance and show the coaching staff that they’re right for the job,” he explained. “Mainz 05 is the most important thing. All the players know that well.”