“He works his socks off for the team” 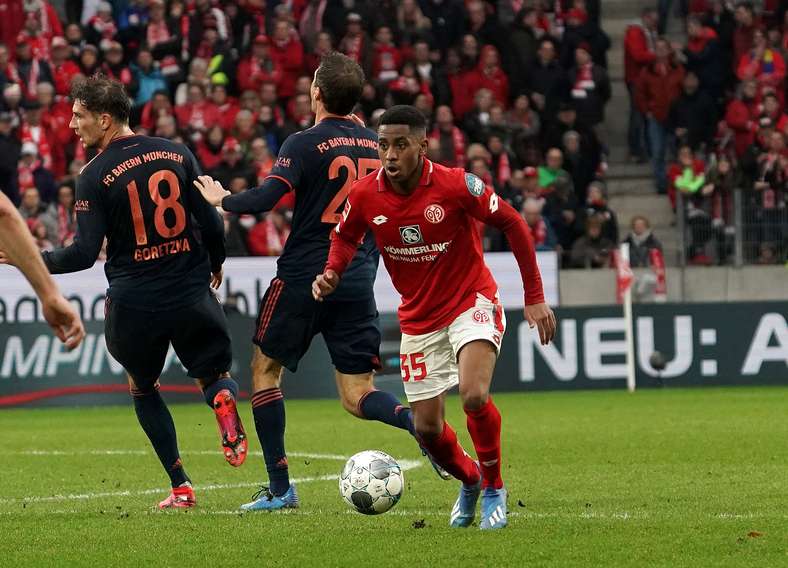 Leandro Barreiro put in a brave and determined performance against the record champions in just his second Bundesliga start at home for FSV.

1FSV Mainz 05 managed to keep the score line at a respectable amount despite suffering an early 3-0 deficit at the weekend against FC Bayern Munich, largely due to a hugely improved performance in the final 60 minutes of the game. There were two performances in particular that caught the eye of head coach Achim Beierlozer, with both Leandro Barreiro and Danny Latza staking their claim for a regular spot in the middle of the park, having enjoyed minimal game time lately.

The club captain made just his ninth appearance of the season so far against the record champions at the weekend. The 30-year-old recently had to undergo an operation due to a herniated disc, and has only just returned to training after a three week absence. “It went really well,” said Latza, who was subbed on for Kunde Malong 30 minutes in against Bayern, forming a strong partnership with Barreiro in the heart of midfield. The coach later praised the veteran’s performance, “He did exactly what we needed at that point in the game.” “You could already see in training that he looked a lot sturdier, much more than before his operation.”

The coach is now hoping for an increase in competition for places. “Those that came in did such a great job, and had such great energy levels, that they will keep their position in the team. I now expect the player who didn’t play well, or behave correctly, to pull his socks up and work hard. Then we will be able to improve our overall performance by raising the performance levels in training.” Beierlozer was referring to the incident at the weekend, when Kunde failed to shake the coach’s hand after coming off, despite apologising for it directly after the final whistle.

However, as well as Kunde and Latza, the 20-year-old Luxembourg national team player has now also emerged as a potential candidate for the starting XI after his impressive performance against Bayern. “That was 100% Mainz 05, 100% effort,” Rouven Schröder praised Barreiro. “He wasn’t completely perfect, but everyone could see that he worked his socks off for the team. That’s exactly what we need as we have a difficult few weeks coming up.” Beierlozer himself was equally as impressed by the youngster’s performance, “Leo did exactly what we’ve been talking about in training over the past few weeks. He fills the gaps really well.” Barreiro showed the level of determination that he, “expects from every player, no matter how old they are.”

It was the fifth appearance of the season for the young midfielder. “We started him in Augsburg but it didn’t quite go to plan,” said the head coach. However, it was a very different story against the now league leaders, having put in the hard work in training over the past few weeks. Beierlozer now hopes Barreiro will push on from this and continue the performance level he showed against Bayern into the coming weeks.

"I've trained well and hoped to make this appearance," said the youngster. "We gave it all we had as a team, in order to not let any more goals in and to get the ball forward. We did that pretty well." The midfielder himself said that he was happy with his personal performance. "I think I made a good impression," he said, but he still regrets that volley that hit to post. "I should've made it 2-1 there," Barreiro said.

...The most important thing in our situation

"We wanted the game to remain open, but we were then 3-0 down after half an hour," said Latza. "Nonetheless, we got stuck in and were switched on in the second half. We played higher up the pitch and had the ball in their half. We tried to disrupt Bayern's play and win the ball back," were the words of the Zerofivers' captain. "We don't have to sugarcoat it, because at the end of the day, we've taken zero points from our last four games. That's a fact, but then again, how we played after the 3-0 was the way we should be playing as a team." Latza went on to say that you could see that this willingness to run had to be taken into coming matches. "Be brave, don't worry so much and don't shy away from it," Latza encouraged. "That's the most important thing in our situation.