"WE'VE HAD CHANCES TO DECIDE GAMES".

Werder Bremen are visitors at the OPEL ARENA on Saturday in the Match of Hearts. 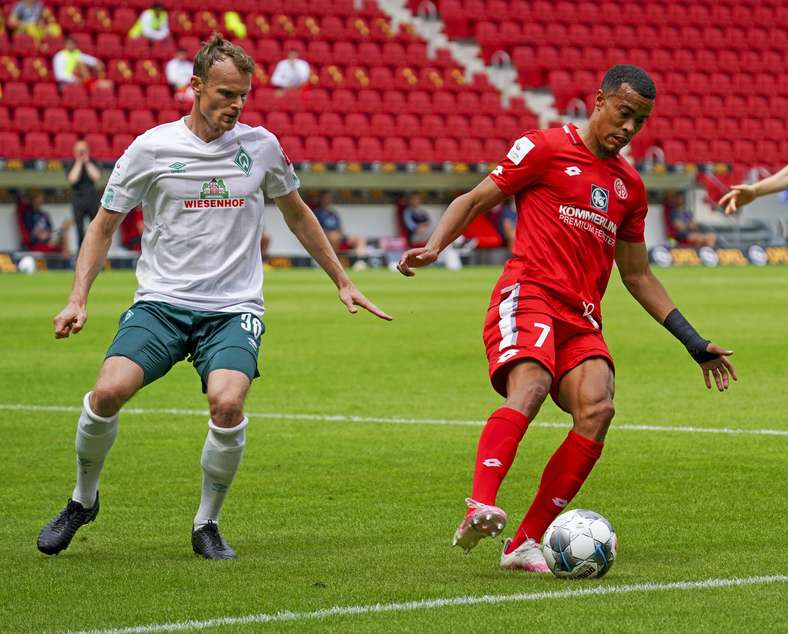 Robin Quaison and his team-mates want to turn chances into goals against Werder Bremen.

Mainz had mixed feelings after the game in Berlin: on the one hand, satisfaction at a strong defensive performance and a deserved away point, but on the other hand, the fact that they once again failed to score a goal of their own despite good chances to score. But the game at the Olympiastadion had already been thematically and mentally worked through on Wednesday, as Jan-Moritz Lichte announced at the press conference ahead of the Match of Hearts against Werder Bremen on Saturday (3:30pm CET). "Now it's all about Bremen," the head coach made clear the full focus is on the important match in which the Zerofivers finally want to claim their first three points at the OPEL ARENA this season.

Nevertheless, it doesn't hurt to look back a little further, because the memories of the last encounter with the Bremen side are positive. After the 3-1 victory on the penultimate Matchday of last season, the Rheinhessen celebrated staying in the league at the OPEL ARENA. "Of course we have in mind that we won the last two games against Bremen," says Lichte. However, this is not a benchmark. The Mainz coach prefers to focus on the present. "Bremen have changed a bit in their style of play. They defend very compactly and also deep in their own half. For us, the task will be to develop ideas and spaces with the ball in order to become a threat on goal." At the same time, Mainz must once again repeat their performance off the ball from Berlin, in pressing and defending the depth that the visitors are always looking for. "Werder are relying on counter-attacks at the moment. They play forward quickly and look for the direct route to goal with their speedy players to create danger. In the build-up to the game, they have had clear processes for a long time and are very well-rehearsed," said the Mainz head coach, describing the upcoming opponent.

Playing against this approach, Lichte doesn't see creating chances in front of the opponent's goal as his team's problem at all, because "we were goal-threatening in the last few weeks. We had chances to decide games and that's what it's all about." That's why the Zerofivers have been working on this area again in training. Finishing in the penalty area, goal kicks and precise balls from the outside the box were on the programme," in order to gain confidence and develop the ability to score goals.

It's the last Bundesliga game of the year, so you can throw everything you've got into it, concentrate and give it your all.

Mentally and physically, the Mainz coach believes his team is ready for the last Bundesliga match of 2020 against the fourteenth-placed team in the table, which has collected eleven points after twelve Matchdays. "Maybe it's also a little easier at the end of a busy week, even though we still have the cup game coming up. It's the last Bundesliga game of the year, so you can throw everything you've got into it, concentrate and give it your all. Everyone will have the opportunity to be at 100 per cent," Lichte is convinced. The importance of the game is clear to everyone involved at Mainz 05. Nevertheless, sporting director Rouven Schröder emphasises: "We must not start measuring any points difference already. We have to focus on ourselves, show our performance and play our games positively. Then we will get out of the bottom.