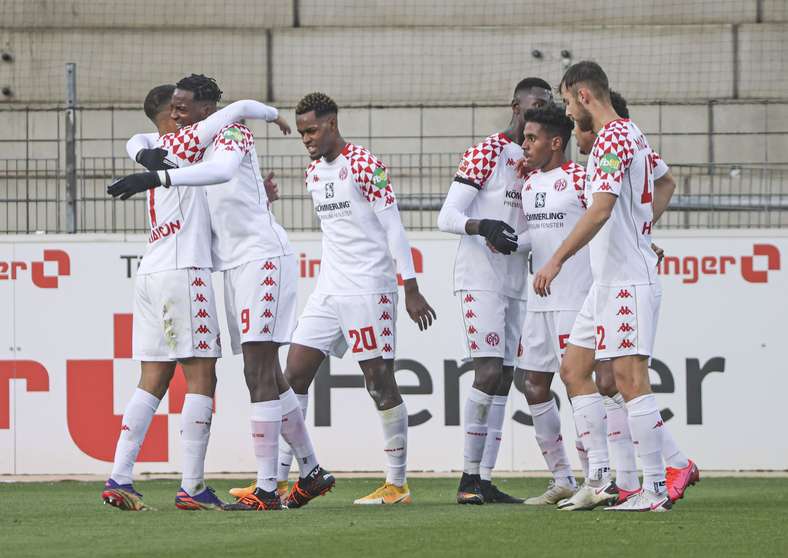 The spell is broken! On the 8th Bundesliga matchday, the Zerofivers were able to achieve their first victory of the season thanks to a 3-1 victory at SC Freiburg. Mainz earned the three points mainly in the first half, when the hosts hardly had a chance and Mainz could have had an even bigger lead. The three-goal lead at half-time was well-deserved thanks to the efficient pressing of the visitors, coupled with powerful counter-attacks. In the second-half only Nils Petersen had an answer to Jean-Philippe Mateta's hat-trick. Mainz secured the victory safely over time and after six defeats to start the season, they now have four points from the last two games.

Jan-Moritz Lichte made three changes following the international break and the draw against Schalke: For the suspended captain Danny Latza, the sick Jonny Burkardt and Luca Kilian. Levin Öztunali, Robin Quaison and Alexander Hack all started in Breisgau. In addition, Mainz had made a tactical change and they started with a 5-4-1 with Hack in the central position at the back. Öztunali was to provide momentum over the right, Daniel Brosinski over the left.

It started off well from the visitors point of view. Around only 60 seconds had been played when the consistent counter-attacks of the Zerofivers produced its first results. Quaison passed to Leandro Barreiro in midfield, who quickly passed on to Jean-Philippe Mateta, who just had Flo Müller to beat, leaving the on-loan goalkeeper in the Freiburg box with no chance. Although Freiburg had significantly more possession of the ball as a result, the visitors still had a chance. After a free-kick from the home side in the 9th minute, it went again at lightning speed forward. Jean-Paul Boëtius looked for the Dutchman again in the penalty area, but the pass was too inaccurate and Dominique Heintz was able to break it up. Only three minutes later Mateta had another big chance to make it 2-0, but failed after a fine save from Müller (12'). The first chance for the Freiburgers, who had their problems with the aggressive Mainz players, was by Christian Günter a little later, but only hit the outside net (15'). On the opposite side, Müller was again the centre of attention as he cleared a 20-metre bullet from Boëtius after winning the ball from Barreiro.

The Zerofivers acted cleverly here, some of them started early, but they also left the game to their opponents again and again and skilfully secured the areas around their own penalty area. Whenever the opportunity arose, they always countered quickly and purposefully towards the Freiburg box. This was also the case in the 21st minute, when Quaison shifted the game, passed to Öztunali who crossed to Barreiro in behind, but his shot just missed the target and also only found the outside netting. When Christian Streich's team had room to counterattack shortly afterwards, Vincenco Grifo appeared in the penalty area, but put the ball well over the Mainz goal (22'). However, the more efficient team proved to be Mainz in the first 45 minutes, who were to double their lead in the 34th minute. A tight shot by Quaison from 18 metres could only be parried by Müller, and Mateta thanked him from eight metres with a tap-in - 2-0 (34')! Freiburg found hardly any means and could do very little despite having over 70 percent ball possession. Also, because the Zerofivers again and again were cool in front of goal, they increased the lead before the break. Boëtius played a perfect pass to the Mainz goalscorer, who completed the flawless hat-trick in minute 42. With this 3-0 lead he also went into the break shortly afterwards, Zentner had just before been able to save the best Freiburg opportunity in the first half by Jonathan Schmid (45').

The Zerofivers were unchanged after the break and initially had to resist a little pressure from the hosts, which they survived unscathed. In fact, Mainz could have put the lid on the game after just under an hour. Again Mateta, this time from Barreiro, had been brilliantly played in, he went around Müller, but from an acute angle only placed the ball on the crossbar (60'). So it was only 3-1 instead of 4-0 a little later, because Petersen scored from nowhere. Zentner had been able to fend off Roland Sallai's shot to the side, but the Mainz number one was powerless to prevent the Freiburg veteran from a second shot (63'). A goal that initially gave Freiburg a boost - and with a series of corners, the guests were quite lucky that the hosts were unable to score again. Lichte reacted and brought on Kunde Malong and Karim Onisiwo for Edimilson Fernandes and Robin Quaison. The Austrian also made his mark just seconds after his substitution, but his attempt from a good 20 metres landed over the box (71').

But victory was far from sealed at the start of the final phase, and the two-goal lead seemed deceptive. Höler just missed the Mainz goal in the 72nd minute, Sallai had only just missed a cross from the right side before. The Freiburgers seemed to believe in a comeback at this stage, and the guests for their part were not using the space available to them as consistently as they did before the break. On the other hand, Mainz subsequently stabilised itself defensively, and more efficiently, and thus rarely offered the hosts room to create an attack. Onisiwo missed the final chance on a counterattack in minute 87, after a fine pass from Boëtius. The missed chance should have no more consequences, Freiburg threw everything forward, but in vain. With the victory, Mainz increased their total to four points from eight games and move above Schalke 04. Next Sunday (6pm CET) TSG 1899 Hoffenheim will be a guest in the OPEL ARENA.