"HARRY KANE" IS BACK IN GOAL

Intense defensive work to start the week at Bruchweg: Preparation for the home match against Leverkusen is under way - Zentner & St. Juste fully fit again 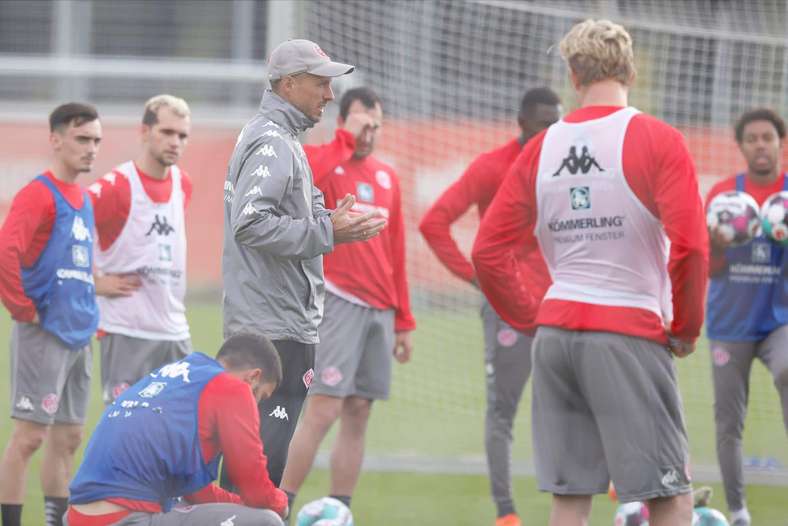 Full throttle into the new training week: The Mainz 05 players threw themselves into training on Monday morning. Jan-Moritz Lichte set his team intense drills, in which winning the ball and tackling were the main focus. At Bruchweg, the preparations for the home game on Saturday (15.30) against Bayer 04 Leverkusen have started.

Again and again, the head coach explained the task to his group, conducted, corrected, and loudly expressed his displeasure if he did not like something. And the Mainz players also made an effort in their various languages to make it clear to each other what was important at the moment. At the end of the session, several players stood together in small groups and conversed. The topic is obvious after the results of the past few weeks: "We are working on the defensive structure," said Lichte. "How we win the ball and the best way to use the ball afterwards."

Defensive structure, tackling, blocking shots, occupying space when the opponent has the ball. These are the focal points for the second week of the international break, at the end of which the second Bundesliga match of the season will be played at the OPEL ARENA. "Irrespective of Leverkusen, we have to focus on how we can concede fewer goals against our opponents. That is and will remain our main focus," explained the coach. Three goals against Leipzig, four each at home against VfB Stuttgart and away to Union Berlin, and in last week's friendly against second-division club Karlsruher SC. Too much in total. And most of them always follow the same pattern: losing the ball unnecessarily, losing our shape, too weak in tackles. "That's why we now have to work on it individually, in small groups, as a back four and as a team so that we allow fewer chances overall. Only then can we be confident that we will concede fewer goals," says the Beierlorzer successor.

Commitment, ambition, concentration and good tackling on this Monday morning give reason for cautious optimism that the team is on the right track and will no longer be as open as before, especially at the back. However, Lichte will not have his entire squad available again until the end of the week. Some of the players are still with their national teams and have matches on Wednesday. "We hope that they will be able to train on Thursday. But it also depends on how much playing time the boys get and when the Coronavirus tests take place.

It is possible that the final match plan for Leverkusen can only be worked on in the final training session. "We will have to repeat the things we are working on now so that everyone can see. We analyzed the friendly against the KSC yesterday and today the focus was on the areas that need improving," says the Mainz coach, who will give his team another day off on Tuesday before they finally get down to real match preparation on Wednesday. "We've planned video sessions for Thursday and Friday, but if we don’t have enough players back yet, we'll make Friday a session for everyone," said Lichte.

There are currently no personnel problems. Jeremiah St. Juste, who was recently absent from training and the friendly match due to shoulder problems, is fully fit again. And Robin Zentner is back in goal. Last week the Mainz goalkeeper was mostly working on outfield stuff. "A precautionary measure. He will do less goalkeeper training, but instead do more footwork drills, so to speak," said the coach. Zentner used to play as a centre forward and soon lost his nickname: From then on, the players only called him "Harry Kane". On Saturday afternoon, in spite of this role reversal, he needs to be preventing goals, not providing ice-cold finishes.