The first home game behind closed doors and under the new Coronavirus protocol: Zerofivers not in need of any “extra motivation” against RB Leipzig 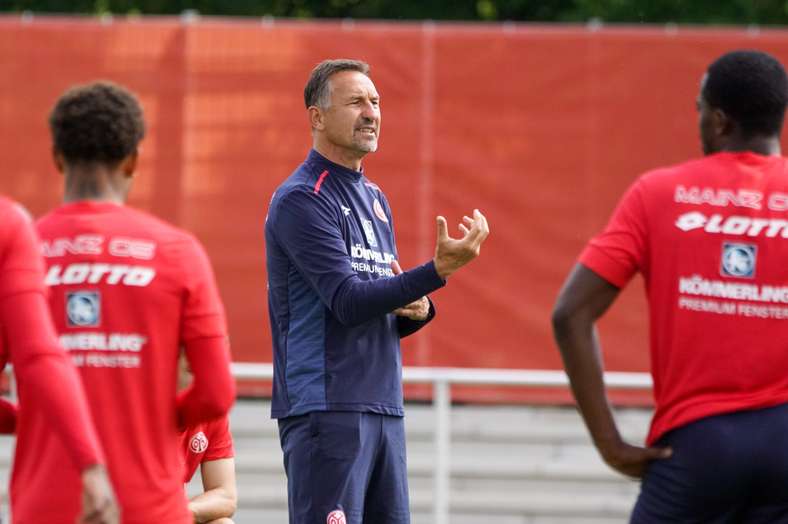 Achim Beierlorzer and his team have been preparing hard for this weekend's match.

The first home game since the Bundesliga restart will also mark the start of a double-header for Mainz 05, as they get set for three matches this upcoming week. On Sunday (15:30 CEST), the Zerofivers will welcome fourth-place RB Leipzig to the OPEL ARENA. “Of course, it’s too bad that we will have to do this without our fans there,” Achim Beierlorzer said during a virtual press conference on Friday. “However, it’s still a home game for us because we do not have to travel, we’re in a familiar environment and because it feels like a home game for us.”

The preparations for the first match under the strict new conditions are well underway. “In Köln, we were able to experience what the protocol looked like in action. We have set high standards for ourselves as a club; we had what was essentially an official test here where everyone at the club was in constant exchange every day in order to guarantee that everything would run smoothly and professionally,” said Rouven Schröder. The club is not expecting any gatherings or protests from the fans. “We’re in contact with them. The fans have told us that there’s nothing planned. We know that the fans are supporting us. We know that they’re with us, even if the stadium is empty,” said the sporting director. The club would like to make clear once again, that all paved areas and parking lots around the stadium will be closed as of 8:00 CEST on matchday, in adherence with the DFL’s hygiene protocol.

A rollercoaster of emotions

Both of Mainz’ last two meetings with Leipzig have served for a rollercoaster of emotions. A year ago, the two sides played out a dramatic 3-3 draw at the OPEL ARENA. Earlier this season, the Zerofivers suffered a disastrous 8-0 defeat in Saxony. “We don’t need any extra motivation against Leipzig. I know that the players want to set things right, which will have a positive impact on their motivation. We want to deliver a much, much stronger performance and result. We’ve put a lot of energy into preparing for this,” Beierlorzer said.

The coaching staff took a thorough look at Leipzig’s 1-1 draw against Freiburg last weekend. “We need to stay focused on us, however. We want to stop Leipzig’s quick, dynamic play by pressing deep, quick take-ons and good passing. In order to do that, we need to remain tight and compact. When we have possession, we want to find the spaces that our opponents give us, escape their gegenpress and find those chances for ourselves,” said Beierlorzer.

The mood after the 2-2 draw in Köln is high, and taking a point away from home brought some fresh wind to the team. Aside from goalkeeper Robin Zentner (cruciate ligament injury), Beierlorzer has a full squad to choose from, now that Jean-Philippe Mateta has served his yellow card suspension.  “We have 28 healthy outfield players, where I have noticed that all have the motivation to perform. We know that it will be a very difficult game and I’m glad that everyone has the chance to feature, even if it makes it a difficult choice for me.” As for how his side will line up on the weekend, Beierlorzer wasn’t willing to reveal anything just yet, saying “Wait and see.”

“We are four points ahead of Düsseldorf and have a home game ahead of us. Three points would be a huge step in the right direction, which is why it’s worth giving it everything we have. The team knows what we want from them and what’s needed to play well consistently. That’s what we’re working on. The way that we’ve been working gives me confidence.”