After Onisiwo's equaliser, Mainz almost take the lead, Hahn’s brace decides the game in favour of the hosts 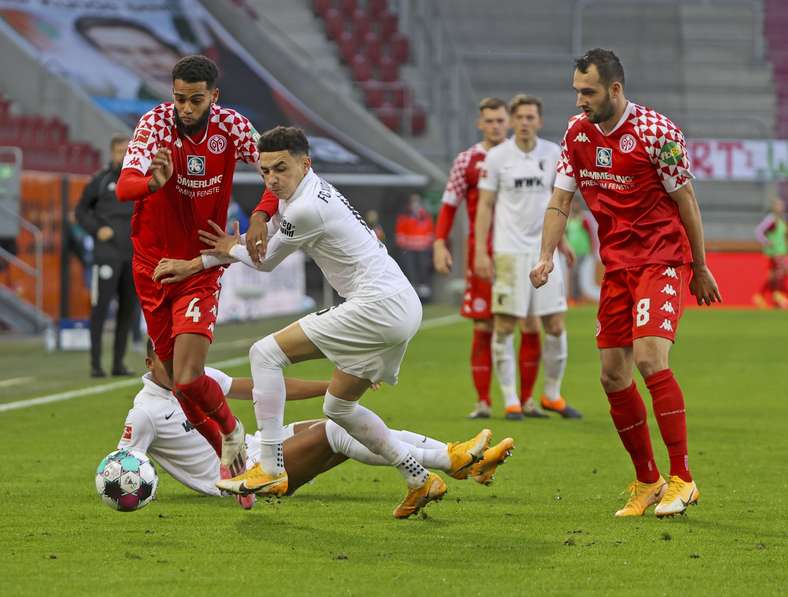 Despite a clear increase in performance in the second half, Mainz 05 did not have enough to take anything away from the game at FC Augsburg on Saturday afternoon: Mainz had to admit defeat 1-3 (0:1) in the end. Ruben Vargas had put the hosts ahead before the break, but after Karim Onisiwo had levelled the score, Mainz missed a chance to take the lead themselves, then a brace from Andre Hahn finally decided the game in favour of Augsburg.

Jan-Moritz Lichte had placed his trust in the same starting eleven that had lost unluckily to Borussia Mönchengladbach seven days earlier.

At the beginning of the game, it was impossible to think of a long period with both teams waiting to take a risk in front of empty stands in the WWK-Arena. At first, a deflected shot from Kunde Malong just missed the goal after 50 seconds, and again less than 60 seconds later Vargas was free in front of Robin Zentner after Andre Hahn's pass, who cleverly shortened the angle, however, his finish also missed the target (2.). After the lively opening minutes, both teams focused on a stable defence. The consequence: no further chances after 15 minutes. The first time it became dangerous again was after a corner by the hosts, when Tobias Strobl lurking at the near post flicked on Daniel Caligiuri's corner with his head, but the ball whizzed past the far post (17th). Augsburg now had more of the game at first, without taking full control. However, Vargas had a shot from 20 metres out, but Zentner did not need to intervene (24).

It was, after a promising start, now a good Bundesliga game, from Mainz’s point of view the most important thing at that time was that even after a good 30 minutes the clean sheet was still intact, mainly because  Mainz succeeded well in condensing the space around their own penalty area. Mainz then got their first taste of a goal in the 34th minute, when a free-kick from Daniel Brosinski sailed past the goal. Five minutes before the break, however, the hosts took the lead. Hahn headed the ball to Iago, whose shot was deflected unluckily by Jeremiah St. Juste and ended up with Vargas who dropped the ball into the net from seven metres. You couldn’t have seen a luckier goal. The last action before the break was recorded once again by the Mainz team, when Danny Latza’s shot was saved (44.).

Both teams came back from the locker room unchanged and the first chance belonged to the hosts, Zentner saved the shot from Michael Gregoritsch who had a go from outside the box (48.). Mainz for their part continued to have difficulty in creating chances, but now appeared more involved, winning more tackles in midfield, but the counter-attacks from defence to attack fizzled out at first. After just under an hour, Mainz made their first change when Onisiwo replaced Jean-Philippe Mateta up front. The goalscorer of both goals from the previous weekend had not had his best day in Augsburg. And the Austrian was not supposed to take six minutes to score as a sub! After Luca Kilian had won the ball in his own half, it happened in a flash, Levin Öztunali crossed to Onisiwo, who took the ball with him and put it through Gikiewicz's legs to equalise (64.). It was a good goal for Mainz, who then quickly tried to score again. First, the Augsburg goalkeeper parried a header from St. Juste safely and shortly afterwards had to stretch to save another attempt by the goalscorer (69.). Only a minute later, Augsburg were surprised to take the lead again when a direct shot from Gregoritsch spun past the left post (70.).

Mainz was at least on a par in the second half and could have taken the lead at the beginning of the final phase. Again it went on the right side through Öztunali and Onisiwo, whose pass just missed Kunde and Robin Quaison in front of goal (75.). While Mainz failed to take their chances, FCA struck in the 80th minute. A cross from Iago was headed by Alfred Finnbogason, who had just been subbed on, and Hahn gave Zentner no chance. A bitter setback, to which Lichte reacted with a quadruple change. In the final minutes, the fresh legs of Edimilson Fernandes, Jonathan Burkardt, Dong-Won Ji and debutant Kevin Stöger tried to help the team to take the win. And one of these subs could also have equalised three minutes before the end of the game: Onisiwo raced up the right wing, put in a great cross, but Burkardt’s effort missed the goal by centimetres (88.). Because Mainz failed to score a second goal, it was again Hahn in the final minutes who put the lid on the game with his second goal following a counter-attack, thus giving Mainz their sixth defeat in the sixth game of the season. Next Saturday (3.30 p.m.) Mainz will welcome Schalke 04 (2 points) to the OPEL ARENA before the next international break.