Hack ahead of the derby

The Mainz centre back gave us his take on the current situation ahead of what promises to be a fiercely contested and hugely important Rhine-Main Derby. 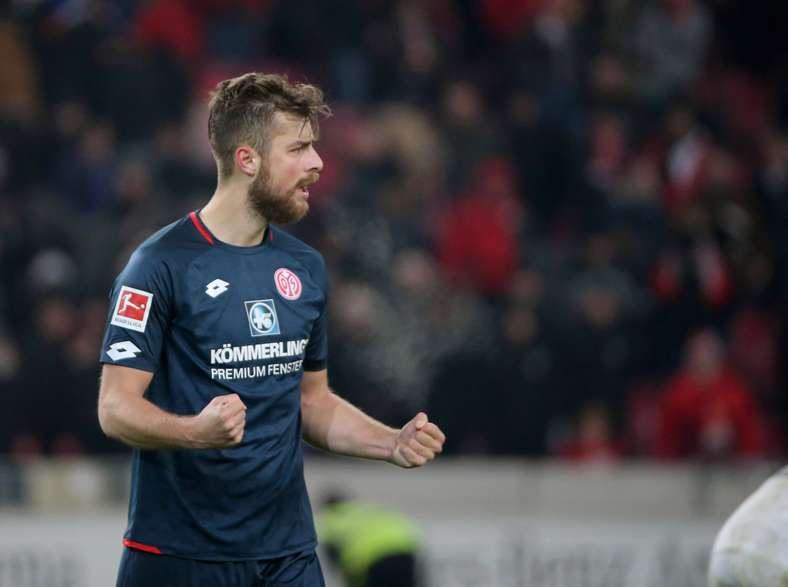 Hack had to be taken off at half time against Hoffenheim due to a calf problem, but that didn't stop him from loudly cheering his teammates on from the sideline.

Matchday 29 is now behind us; unfortunately however, it didn’t go quite to plan for the Zerofivers as they slumped to a 1-0 home defeat to TSG Hoffenheim. On Tuesday though, Alexander Hack was quite confident in a virtual media session, “we have enough games left to make up for dropped points over the course of the season. We know what our internal approach should be in order to achieve our goal – we’ve got the mentality for it too.”

Just one point separates Mainz 05 from Fortuna Düsseldorf in the relegation playoff spot – that’s the current reality with just five games still to play. Werder Bremen have the chance to draw level on points with FSV on Wednesday, providing they win their game in hand against Eintracht Frankfurt. This Saturday, the Zerofivers then take on the Eagles themselves in what is a Derby of the utmost importance. “The only thing that matters to us is winning in Frankfurt. Then we move on to the next game. The bottom line is that we need to look at our position as an advantage in this relegation battle,” the German centre back said. “The ball’s still in our court. We just need to look at it in a positive light. We’ve got to go into it with the same intensity that we’ve shown both of our last two games, then we’ll stay in the Bundesliga.”

No time to wallow

Nonetheless, the 26-year-old was adamant that the team is still full of disappointment. FSV took just one point from a three-game week, “but wallowing doesn’t help us in this important part of the season. We see the amount of points that we could’ve had, but we mustn’t dwell on what led to the situation we’re in now. We also mustn’t point fingers at one another. That doesn’t help. We got into this together, now we need to get out of it together. Everyone in the team understands this.” Hack went on to explain that in the end, the required qualities are the same as they always are. It’s about virtues, about desire, about mentality. “We need to put the hammer down as a team. Whoever has the most desire, gets the reward at the end. We need to show that we have the most desire. That’s a relegation battle,” said Hack.

“We need to find the right emotions out on the pitch. In the end, it isn’t the team that plays the most attractive football that survives. Mentality counts for more than quality. Knowing what it’s all about, that’s what we need to get into our heads. If, in the end, each player can say ‘OK, I’m completely exhausted, I’ve given it everything, I’ve got nothing left to give for the team in order to win’: that’s the spirt that we need in the coming games.”

“Everybody can do their part”

Hack was forced off with a calf problem at half time during the game against Hoffenheim. Though that didn’t stop him from playing a role; he acted as a constant motivator from the sideline, trying to spur his teammates on to victory. “It’s quite in the stadium without the fans there. You hear everything that goes on in the team. Everybody can do their part. Even if you’re not playing, you can still give it your all, you can support the lads. I had no voice left yesterday because I was shouting so much. We all need to push from the outside, give feedback and coach others. As a footballer, there’s nothing better than receiving positive feedback for a great bit of play.”

There are still 15 points left to play for in the closing stages of this Bundesliga season. Hack stated that Achim Beierlorzer has simply set the task of picking up more points than their competition. “It’s just about performing well and focusing on what we have to do. And we need points. We took a bit of energy from the Union game, and played well against Hoffenheim, that’s worth a lot. We there or thereabouts and need to keep believing. Then we’ll be rewarded,” Mainz’s head coach said. “Cross our fingers and get something positive from these last few games,” was Hack’s advice.