The Zerofivers sniff at a shock after Öztunali's flash of inspiration and ultimately earn a valuable point for their morale - Bell celebrates comeback, Zentner in top form 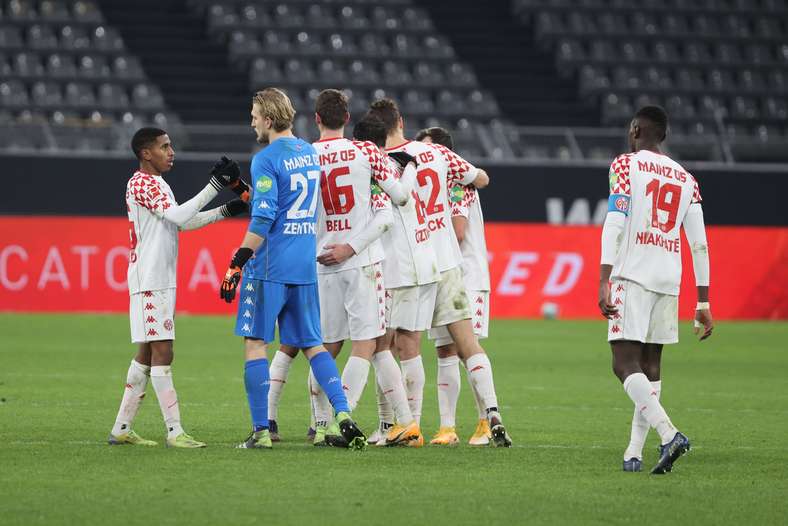 Erling Haaland was eliminated, sniffed victory and ultimately left the pitch with a moral victory: Mainz 05 returned to the Bruchweg with a point in the bag after the 1-1 (0-0) draw away to Borussia Dortmund. And that after 90 minutes that had everything to offer: In addition to Levin Öztunali's wonder goal to give the visitors the lead, which Thomas Meunier was able to cancel out a little later, the Zerofivers twice hit the post, while Robin Zentner was convincing with a series of great reflex saves and BVB captain Marco Reus put a penalty kick wide of the goal.

Bo Svensson made three changes from the defeat against Frankfurt: Stefan Bell, whose long absence wasn't noticed, replaced the injured Jeremiah St. Juste and made his first Bundesliga appearance since March 2019, Phillipp Mwene took over for the also injured Daniel Brosinski and Öztunali was preferred to Kevin Stöger. The changes were also linked to the head coach's decision to play with a 5-3-2 formation, with Bell in the centre and the other two fresh players on the wing.

The game had hardly begun when the ball was already in the Mainz net. However, after about two minutes of checking by the video assistant, it turned out that Meunier had been offside by a foot before the supposed goal by Haaland. The right decision - breathe a sigh of relief! Borussia were dominant and had more of the game. But what Svensson had announced in the run-up, namely that he wanted to make his own mark, became apparent for the first time after nine minutes. After a beautiful pass from captain Danny Latza to the advanced Öztunali, the latter served Jonathan Burkardt, whose shot hit the outside of the net. Three minutes later, Zentner, who had a great day, especially in the first half, saved Reus' free kick from 18 metres (12'). But the Mainz defence was mostly compact and well organised, the hosts did not find any further gaps at first. The next action worth mentioning therefore followed on the opposite side, when Latza tested Roman Bürki from 16 metres (19'). Afterwards, however, Dortmund's superiority was initially to be reflected in further scoring chances and Mainz's number one had further opportunities to distinguish himself. Zentner reacted brilliantly against Julian Brandt's flicked shot (23') as well as against a lob by the completely free Reus (26').

The pressure increased and after half an hour, Dortmund's young talent Jude Bellingham hit the post from an acute angle (31'). Mainz reacted and started to attack Dortmund's build-up play more aggressively, but they did not have another chance to take the lead until the break. It was Robin Quaison who put the last exclamation mark on the first half with a half-volley from 20 metres, but Bürki saved with both fists (44'). The well-organised visitors deserved the goalless draw at this point thanks to a disciplined performance and a strong goalkeeper.

The second half, which the Zerofivers started in the same formation, began much less spectacularly than the first half. All the more spectacular was the hammer that Öztunali unleashed after 57 minutes: The full-back moved in from the right wing, took off with his weaker left foot without a second thought and hammered the ball into the top corner ("It's great when you can help the team take a 1-0 lead. The ball was in a good position, the left foot is not only there for standing and then I just fired it in," a satisfied scorer explained his simple secret of success after the game) - Mainz suddenly led. And a short time later, they almost added goal number two. A Latza free-kick sailed into the penalty area, where Alexander Hack's header ultimately landed on the crossbar (63'). BVB then tried to equalise and made countless passes in the Mainz half, but the Mainz team was resolute from the penalty area onwards and always made a move for the ball. The hosts had to exercise patience against a tight-knit Mainz side, who had covered around seven kilometres more than the Dortmunders after 70 minutes. It was now an energy-sapping affair at Signal Iduna Park.

And perhaps it was also due to this fact that BVB equalised a little later, more or less out of nowhere. Moussa Niakhaté had actually already cleared the situation against substitute Youssoufa Moukoko, but the 16-year-old won the ball on the baseline, where he passed in front of the goal, but Mwene cleared it right to the feet of Meunier, who put the ball into the net from 14 metres (73'). Annoying. It seemed to get worse less than 60 seconds later. Hack was too late against the goalscorer and referee Sven Jablonski pointed to the spot, from where Reus, however, missed the opportunity to take the lead when he put the ball wide of the goal (76'). It was a gripping, high-intensity few minutes in the final phase, because Mainz did not give up either and just missed the chance to take the lead again shortly afterwards. Manuel Akanji had blocked Burkardt's shot, but the ball ended up with Latza, whose attempt rolled off the inside post towards the goal line, where Raphael Gurreiro was finally able to clear (78'). Mainz recovered quickly from the two moments of shock, were now defensively well-positioned again and continued to make attacking inroads. Bürki saved a free kick by Latza from the corner of the net after 85 minutes. Dortmund continued to search in vain for gaps, while Mainz lurked on the counterattack: In the 87th minute, Niakhaté took courage and started a solo run from his own penalty area over 80 metres into the opponent's box, where the Frenchman finally ran out of steam and put the ball a good metre past the goal - nevertheless, a scene that underlined Mainz's will this afternoon. A little later, it was over, and the visitors earned a valuable and also unexpected point in their fight to stay in the league. The two upcoming matches at the OPEL ARENA against VfL Wolfsburg on Tuesday and RB Leipzig on Saturday afternoon will show whether this can give them a boost. However, the seventh point of the season earned together against a strong Borussia must at least serve as an encouragement.