Going in front to no effect

The Zerofivers are puzzled at their own performance. Zentner couldn't convince the referee. 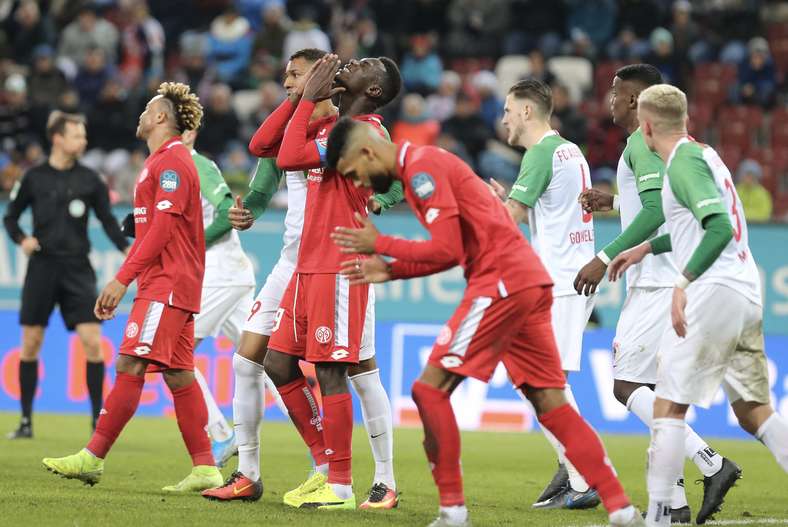 The Zerofivers' disappointment with their own performance, and also with the decision to give the decisive penalty, was palpable after the game in Augsburg.

After two energetic, fast-paced and ultimately successful outings under Achim Beierlorzer’s leadership, the Zerofivers put in a performance against Augsburg that was in keeping with trends that predate the appointment of the current head coach of Mainz 05. Rouven Schröder said that was therefore important to analyse this sobering defeat in the same calm manner as the two games preceding it. “The game did not go as we had imagined it would. The bottom line is that it was a deserved defeat. You have to do more if you to take something from a match.”

FSV’s sporting director appeared confused at the team’s showing, especially in the first half. “We explicitly spoke about Augsburg attacking like this. We didn’t make enough challenges, didn’t get tight to our man, we defended poorly and had to weather a considerable storm”, Schröder said. Midway through the game, he came to realise that “sometimes, you have to stay compact.”

“That certain something was lacking”

It was even more curious then that it was Mainz who got their noses in front, despite Augsburg having a series of gilt-edge chances. What neither Schröder nor Beierlorzer could grasp was the fact that this lead did little to affect the outcome of the game. “You have to be aware of how well the game actually developed. You’ve just survived four or five chances for the opposition to go in front and suddenly you are in the lead. You start to think that it might just be your day. Then it’s 1-1 at the break. But you can still say ‘it’s all to play for’”.

The Zerofivers were much improved in some aspects in the second half. The team looked less fragile and was conceding fewer chances, but Mainz also struggled to produce any real goalscoring opportunities. “That certain something was lacking”, said ‘keeper Robin Zentner. “You can’t say that we simply didn’t score. We didn’t even get close because we didn’t manage to create any chances of our own. We didn’t get forward enough. We played around with it at the back too much; something we really didn’t want to do.”

FSV’s goalkeeper feels that this defeat to a direct competitor in the Bundesliga table was a setback. “We had to take the momentum from going 1-0 up, and from the whole situation. Despite a poor first half, we could have taken all three points if we had put in a good performance for 45 minutes. In the end, it’s annoying when you give away a penalty like that, that was never a penalty”, the Mainz stopper explained. Zentner didn’t need any television screens to back this opinion. “I have seen it, and have been convinced from the start that it wasn’t a foul. He was in the box, sure, but it isn’t a pen. I asked the ref to take another look at it. He said he wouldn’t. I couldn’t convince him”, said Zentner.

On Tuesday afternoon (15:00 CET), Mainz begin their preparations for Saturday’s clash in the OPEL ARENA against Borussia Dortmund. Zentner sees the encounter as another chance to gain some points, even though the roles of favourites and underdogs are clearly defined. “We have had two great games and one poor one. If we give it 100%, we have a chance against Dortmund at home. When we play in the Bundesliga, we always want to take something away from the game. It’ll be that way this weekend and until Christmas, because we know that other teams can go on a good run of form.