Goal-focused, confident and ready to fight

Schröder: "No one's given us a chance in Dortmund, but it's still a game where we can score points" 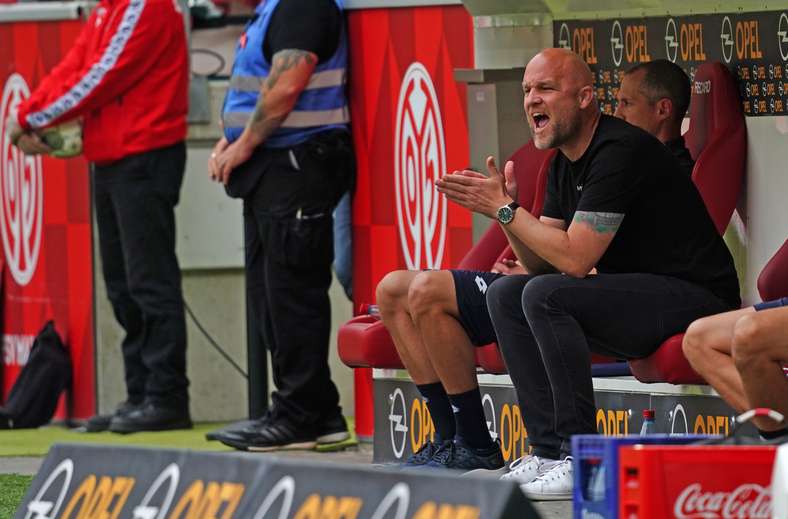 The Zerofivers' sporting director has his sights set on the next game against Dortmund.

The bitter 1-0 loss against FC Augsburg on the weekend was hard to take for many. The home defeat against a close rival in the league during the fight against relegation led Rouven Schröder in a virtual press conference to state “it’s a situation that’s annoyed all of us. We could have taken an important step.” But the run-in towards the end of the Bundesliga continues, as on Wednesday evening (20:30 CEST), the Zerofivers face their next challenge – an away game against second-placed Borussia Dortmund.

It’s always the most recent results that affect the mood in a relegation battle and they change from matchday to matchday. Mainz have suffered through an unexpected defeat, and the mood in the camp is low, despite their higher goal difference and three point advantage over Düsseldorf and Bremen in the relegation battle. However, Werder’s victory over Paderborn gave their team the firm belief that they can catch up with their rivals themselves. This story has incentivised Rouven Schröder. Well, let’s see if that happens,” said the 44-year-old, who was confident and combative after the disappointing start to the week.

On Monday morning, when he looked at the faces of the players who had previously sat in the dressing room frustrated on the weekend, he got the clear impression that their minds were clearly focused on the next game. He spoke with one or two of them in order to work on their situations, as well as develop guidelines, “in order to use our upcoming challenges to foster energetic performances in a positive way, to concentrate on the essentials and not pay attention to what others are doing.” This also included freeing themselves from paying attention to external influences, and also calculating possible futures. “We are still three points ahead. There are still three games left. We’ve got Dortmund next. No one is betting on us, but we can still get points in this next game,” said the sporting director.

For this reason, any major analysis of the Augsburg game was avoided, and instead, more work was done on the mental side. “More in the psychological area. Not like you have to unpack what’s in your brain, but more about strengthening your group feeling, and talk about things clearer,” explained Schröder. “The Augsburg game is over, done. Now we’re ready and preparing specifically for Dortmund.”

“The belief must be there“

It’s been two years since Mainz were in a similarly precarious position and had some apparently difficult games for run-in. They also came after a loss to FC Augsburg. „Against Leipzig, Dortmund and Bremen in the last three games we were the underdog each time. Despite that we managed to stay up,“ said Schröder. At that time, the team then managed by Sandro Schwarz managed to stay up with a game to spare, after two energetic performances against Leipzig (3-0 win) and a shock 2-0 win against Dortmund.

„We’ve used this example to motivate the team,“ said Schröder. “There were enough players who experienced these matches first-hand. Of course it was a different game and there were different requirements going in, but nevertheless, the belief that you can alter your fate must be there. You have to use these images to build yourself up. You have to use everything positive to your advantage.”

The coronavirus pandemic has prevented the club from mustering all of its fans for this crucial final phase, and the shared bond with supporters and players is useful for fighting against the odds. “That has always made us special and is a good point,” said the sporting director. “But it affects other clubs too. We have to find our own way now.”