"Give our all in every match" 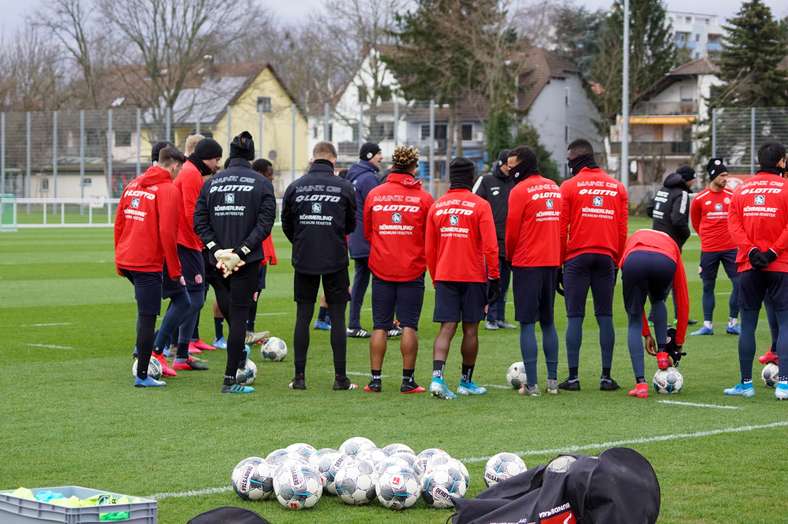 Achim Beierlorzer used the shorted training week at the Bruchweg to get his team focused and prepared on the upcoming challenge.

With Karneval now over, 1. FSV Mainz 05 are in the midst of a crucial phase in their pursuit of staying up. With 10 games left to go, three of Mainz’s upcoming matches are against teams also in the mix at the bottom of the table. First up is Paderborn, who head to the OPEL ARENA this Saturday (15:30 CET). “Although they are in last place, they are a side that will push us to our limits,” said Achim Beierlorzer during a pre-match press conference.

Preparations for the weekend began at the Bruchweg on Ash Wednesday. The team also took the time to analyse Sunday’s 4-0 defeat to Wolfsburg, during which Mainz were clearly overrun. Several players had also showed signs of disinterest on the club float during the Rose Monday parade, which also served for discussion.

Rouven Schröder addressed the issue once again on Thursday, because it “both struck and hurt the club.” Especially because it became the leading news, overshadowing the other positive reactions at Mainz on how the club had approached the topic of Karneval. “The behaviour of certain players was not positive and not acceptable. We explained that to everyone involved,” said the sporting director. The players in question were taken aback, as that wasn’t the impression they had of the situation. “Personally, I thought it was great,” said Beierlorzer. “It was my first Fastnacht parade and the interactions with the crowd were great.”

Nonetheless, the head coach and the sporting director did not mince words when speaking to the team, particularly about their weak performance against Wolfsburg. “It’s important that we clearly define these things and that we analyse them,” said Schröder, with an eye on the last weekend’s match, which “featured phases that didn’t represent the Mainz 05 that we envision. We cannot allow ourselves similar phases in those close Bundesliga games. We were very clear about that. We all know that they can do better. We all have the responsibility to deliver a successful performance on Saturday.”

That’s why, according to the coach, it’s so important to have the necessary stability that was lacking in Wolfsburg. “Consistency is the magic word,” said Beierlorzer. “We would have liked to have kept the stability that we had over the opening 15 minutes going for the full 90 minutes. Unfortunately, that didn’t happen. We spoke with the team about not allowing setbacks to throw us off our game. We need to put in more effort and can’t allow ourselves to get rattled by sudden shocks when we concede a goal. That’s been noticeable. We now have several important matches ahead of us. Up next is Paderborn. We need to be able to deal with the stress and the frustration. It’s always possible that things don’t go as planned. If that’s the case, then we cannot allow ourselves to slip and need to continue to play our game.”

The topic has been addressed many times already, “but we know that we always have to repeat it. We need to continue addressing those things that are important in order to win Bundesliga games. We can see how games like this can quickly change, so it’s extremely important to maintain mental strength. We’re trying to bring out this out in our training sessions and to convey it during our team talks. It’s one of the most important things we need in our situation,” said Beierlorzer. “In the end, we stopped giving our all because we were frustrated. We confronted the team about that. The main thing is to give our all in every match. For ourselves, for the club, for the fans.”

It’s a message that the Zerofiver’s upcoming opponents embody. “Paderborn has shown recently how well they can do on the road, and the style of football they play. They had Bayern München on the verge of a draw because of that. They always want to play their game, are always looking for solutions and do so while remained disciplined and always put their opponents under pressure,” Beierlorzer said. “It can become a real fight for us, one that could be really close. We cannot give anything less than a 100 per cent on Saturday.”