FULL OF ENERGY INTO THE FINAL SPURT

After the defeat in Bielefeld, the Zerofivers want to win the next match against 1. FC Köln - A big squad offers advantages for the upcoming weeks 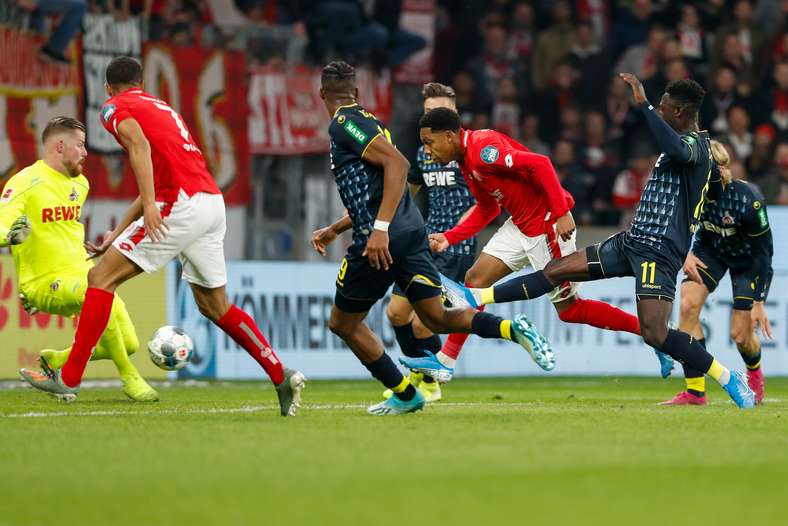 Last season, Jean-Paul Boëtius brought the Zerofivers into the game at the OPEL ARENA after trailing, Mainz eventually won 3-1.

As the year 2020 draws to a close, Mainz will be in full swing in the last two weeks before Christmas. The team has two big weeks ahead of them, starting with another direct rival, 1. FC Köln, on Saturday afternoon (3.30pm CET at the OPEL ARENA). The head coach sees a "good chance" for his team to win the next match, as long as certain conditions are met.

"I actually say it week after week," Jan-Moritz Lichte said by way of introduction at the press conference two days before kick-off: "The boys train well, show commitment and no player gives the coaches  the impression that he doesn't know what it's all about." That was also the case for the defeat in Bielefeld, he said, after a performance that everyone was unhappy with. "We did crucial things wrong there. It had nothing to do with a lack of energy. We rarely made the final pass cleanly and conceded those two goals through the middle," said the 05 coach. However, he is still convinced of the recently proven system with three central defenders. "We feel comfortable with that at the moment, we allow fewer big chances than before, we create good opportunities ourselves." After the flood of goals conceded at the beginning of the season, the focus must remain on a stable defence. That the Zerofivers are nevertheless capable of reacting and adapting their basic shape depending on the course of the game was demonstrated most recently in the second half in Bielefeld, when they gained a visual advantage going to a 4-4-2 with a midfield pack. "Being able to react during a game is important for me." The shortcoming, however, was that there were too few clear opportunities at the Bielefeld Alm.

Against Koln, Mainz want to do better in their home stadium, as the sporting director emphasised: "The game is of course very important for us. FC Koln is a direct competitor against whom the games have usually been close in the past," said Rouven Schröder, who emphasised that five points from ten games are naturally "too few". "We want to celebrate our first three points in the OPEL ARENA on Saturday and get out of the bottom three to go into the new week with momentum. That is our mission that we are working for. We are ambitious and will not hide. We say that with confidence because we know what we can do." The opponents, who arrive with seven points in the bag so far and presumably similar goals, have recently attracted attention with their first win of the season at Borussia Dortmund, followed by the draw against VfL Wolsburg. "After their change of system" - the Effzeh also recently operated with a defensive five-man or three-man backline - "they have rediscovered a certain security for themselves," Lichte analysed. "We will see how stable this security is. We will stand up to them, test the opponent and want to win this game on our side.

The head coach can rely on all the players who have been available recently. In addition, Phillipp Mwene and Ádám Szalai, who are still injured, are making good progress on their way back to training, while Levin Öztunali will have to wait a few more weeks after suffering a thigh injury against Hoffenheim. Lichte did not want to rule out the possibility that captain Danny Latza or Bielefeld goalscorer Kevin Stöger could be in the starting eleven as early as this weekend. "Danny is our captain and always an option. Kevin has shown at the eight position that he always wants the ball, is happy to pick it up sometimes, also has depth and can develop a scoring threat from it. We will let the last few training sessions sink in and then decide amongst us coaches who we will field." Stöger had recently stressed several times that the role on the bench was unfamiliar and that he was ready for his test in the starting eleven. The likelihood that his claim will be reflected at least as the year progresses, also with a view to the starting eleven, is high. After all, just three days after the clash with FC Koln, Mainz are already in action in the capital at Hertha BSC, before Werder Bremen visit the OPEL ARENA just four days later. The DFB Cup clash with VfL Bochum on 23 December will mark the end of the year. Our squad has the advantage of being deep enough to be able to replace anyone," emphasises the head coach with a view to the year-end spurt that begins against FC Koln.