MAINZ SUFFERS SETBACK AWAY TO ARMINIA 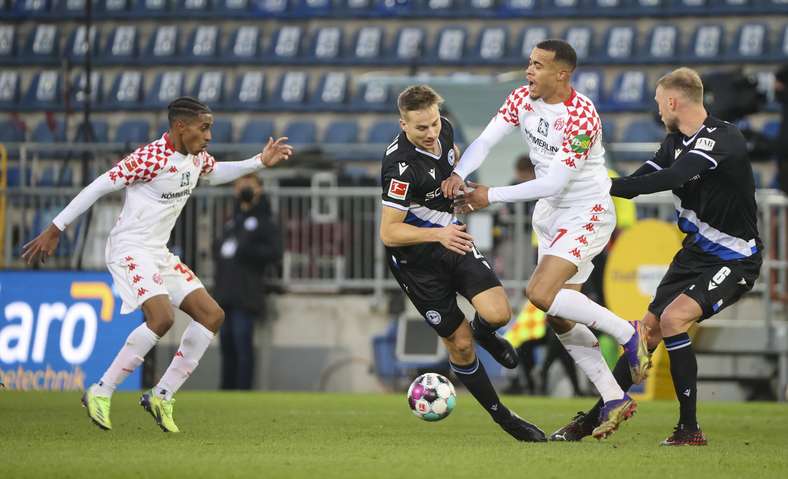 Mainz 05 suffered a setback on Saturday afternoon after three matches without defeat: With a 1-2 loss (0-2), Rheinhessen lost to the promoted team and slipped back to 17th place in the table behind Arminia. After the Zerofivers had missed several big chances to score themselves, the hosts took a lead through Manuel Prietl and a little later was followed by Ritsu Doan. In the final phase, Mainz managed to score through Kevin Stöger, who scored his first goal for Mainz, but after the seventh defeat this season, it will be bittersweet.

Jan-Moritz Lichte had made two changes from the draw against Hoffenheim. The injured Levin Öztunali was replaced on the right by Jonny Burkardt and Aarón took over from the injured Daniel Brosinski. The head coach trusted the same system as in recent weeks and sent his team into the game in a 5-4-1 formation.

The hosts had more of the game in the opening minutes, but without creating any significant chances. It took until the twelfth minute of the game for something to happen in one of the two penalty areas, but Mateta's chance was a good one: Jean-Paul Boëtius intercepted a reckless cross-field ball from Anderson Lucoqui, switched quickly and played the ball into the Frenchman's path, but he was unable to beat Stefan Ortega from close range. Four minutes later, the goalkeeper was again in action, and Boëtius was again the passer. He went round the goalkeeper, but stumbled and put it past the post with his heel (16'). And while Mainz didn't make the most of their chances, Arminia took the lead a little later with a lot of luck: Prietl shot from 20 metres and Alex Hack's chest deflected the ball into the right corner of the goal - 0-1 (21'). A lead that was not exactly deserved and was disappointing because Mainz seemed to have started the game better and had become more and more active in the minutes before. Mainz stayed at it and could have equalised. Burkardt served Edimilson, who deliberately moved back from the touchline to Boëtius, whose direct pickup, however, became too central, and Ortega was on hand - the third good opportunity for the visitors (26'). The fact that scoring goals does not always require big chances was demonstrated for the second time by the home side on the opposite side after a good half hour: accompanied only by Leandro Barreiro and Edimilson, Doan made a cool finish just before the edge of the penalty area, it went through Moussa Niakhaté and gave the promoted side a 2-0 lead (31').

The visitors had a good opportunity before the break. A deflected Aarón cross slid through to Burkardt, whose hard shot from ten metres was blocked by Lucoqui in desperation (41'). The Zerofivers lacked the necessary coolness in front of goal and acted too inconsistently at the back at the decisive moment, the lead was not undeserved for the efficient Bielefelders at the break.

Both teams came out of the break unchanged and started the second 45 minutes extremely cautiously. The first chances were recorded by the visitors, but the attempts of Quaison (53') and Boëtius (55th') were not really dangerous. In minute 58 Lichte then reacted with a triple substitution and brought on Kunde Malong, Kevin Stöger and Karim Onisiwo for Aarón, Barreiro and Edimilson. At the same time, Mainz switched to a 4-4-2 with Niakhaté as left-back and Kunde as a number six. While Jeremiah St. Juste's header to Stöger shortly afterwards was at best half cooked (59'). Klos put the goalscorer in the spotlight to make it 1-0, but Zentner prevented goal number three (61'). In minute 67 the Bielefeld captain but put the ball over the goal.

For their part, Mainz tried their best in the second half, but all too often their attacking efforts got denied, so that even deep into the final phase, the real danger of scoring continued to emanate only from the hosts. Substitute Andreas Voglsammer failed to score in the 78th minute from an acute angle against Zentner (78'), while on the other side, an attempt by Stöger failed completely, the ball spun far past the goal (79'). With the first really compelling opportunity after the restart, Mainz came back into the game three minutes later. After Ortega had only allowed Stöger's chance to be parried, Boëtius carried the ball back into the danger zone, where the Austrian could mark his first goal in a Mainz shirt at the second attempt - 1-2 (82'). Should there still be something left for the red and white? No, because Mateta was unable to make use of his third good opportunity of the day in the fourth minute of stoppage time when he failed against Ortega. While Arminia's second win of the season brings their points total up to seven points, Mainz will be stuck with five points from ten games before the match with 1 FC Köln next Saturday afternoon (3.30pm in the OPEL ARENA).