FSV fall at home to BVB

The Zerofivers allowed BVB to play their own game, and were punished for it. Two quick second-half goals killed off the game from a Mainz perspective. 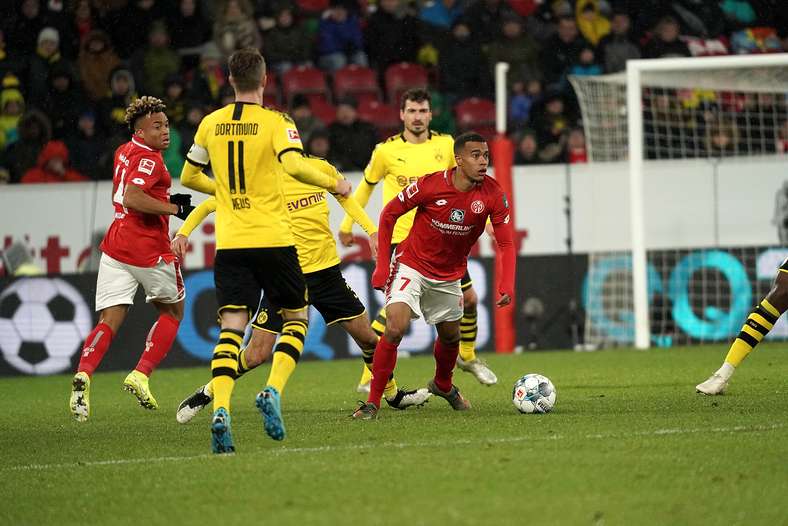 At the start of a busy week of Bundesliga football, the Zerofivers welcomed strong opponents in the shape of Borussia Dortmund. Looking to bounce back quickly from a 2-1 win away at Augsburg, Mainz returned home, with hopes of upsetting the Rhineland giants. However, it was not to be. A timid performance over 90 minutes saw the away side defeat Mainz 05 by four goals to nil.

Achim Beierlorzer made two changes to the starting line-up from last weekend’s defeat. Ridle Baku slotted back into midfield after serving a two-match ban, replacing Leandro Barreiro, and Ádám Szalai replaced the injured Karim Onisiwo up front. The Austrian striker picked up a slight knee problem and was not fit enough even for the bench, so Jean-Philippe Mateta was included in the matchday squad for the first time in the 2019/20 season.

The opening five minutes looked promising for the Zerofivers, they looked sharp and ambitious, Mainz were getting the ball forward. That all changed at the first sign of a Dortmund counterattack. BVB captain Marco Reus saw to quick-fire shots blocked by resolute Mainz defending (7’). This marked a definite momentum shift. It was as if the Zerofivers were suddenly alert of the threat the guests posed on the break, and were reluctant to commit too many men forward. Then, the ball fell to Nico Schulz, but Jeremiah St. Juste put his body on the line to block the shot (12’). Dortmund kept the pressure on and continued to cause issues for the Mainz backline. Niakhaté scrambled the ball away, but only as fire as Nico Schulz, whose cross struck St. Juste on the arm, but the VAR panel in Cologne decided that a penalty should not be given. A let-off for the home side (14’). Mistakes were creeping in to Mainz’ game and the home side allowed BVB to play with far too much freedom.

At this point, BVB were virtually camped in Mainz’ half, and the Zerofivers had to deal with near constant pressure. Robin Zentner was called into action and kept it level with a fantastic outstretched boot to deny Reus (26’). A short while later, Dortmund were in front. The ball was only half cleared, and Marco Reus made great connection with the football, his shoot with the outside of the boot curled away from Zentner and into the bottom right corner of the net (32’). Reus seemed to be all over the place and was soon back in the thick of the action. Dortmund’s captain went down in the box and those of a black-and-yellow persuasion immediately appealed to the referee for a penalty. Again their claims were ignored (40’). There was very little in action during the remaining five minutes of the half, and the sides went down the tunnel for the break with scoreboard reading 1-0 to BVB (45’).

The second half started in much the same way as the first half ended. Dortmund were given a freekick on the left-hand side, which was whipped in by Reus. Julian Brandt flicked the ball on with his head, but Zentner was on hand to get a strong fist to it and clear the danger (48’). The game had appeared to settle down, and the match ebbed and flowed for a good twenty minutes. Then, the onslaught began. Dortmund remained true to type and were lightning-quick on the break, Dan-Axel Zagadou rolled into the path of Jadon Sancho, and Robin Zentner couldn’t keep out the Englishman’s shot (66’). As quick as a flash they scored another. Another counter resulted in another Dortmund goal, Thorgan Hazard’s shot was unstoppable, and the Zerofivers found themselves 3-0 down (69’).

The home side appeared to rally, Boëtius made way for Alexandru Maxim, and Mainz resolved to give the fans something to cheer about. Well, that cheer didn’t come due to a goal, but do to the return of a long-absent hero. In the 80th minute, Beierlorzer brought on Mateta for Szalai, and the Mainz fans’ joy was clear to see. That wouldn’t last, however, as Nico Schulz put the final nail in the coffin, finishing another swift counter (84’). It ended 4-0 to Dortmund, an afternoon to forget for Mainz.

The Zerofivers now head into the final week of the Hinrunde. First up, an away trip to Bremen on Tuesday, before a home game against Bayer Leverkusen.