From relegation candidates to midtable security

A review of the 2011/12 season: summer departures, a rough start and an upturn in form. 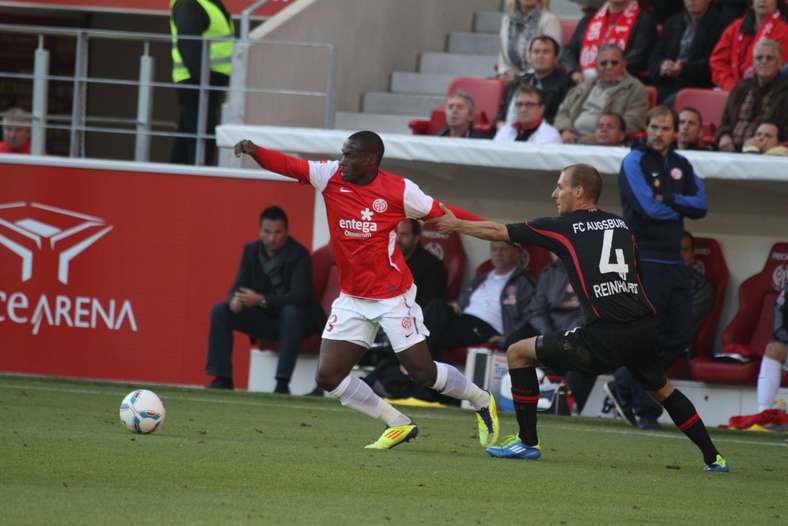 FC Augsburg at home: one of many early setbacks of the 2011/12 season.

Mainz are staying at home. So we have a bit of time to take you through some of the most important events in our club’s history. Today, we’re looking at the 2011/12 season, the campaign following Mainz’s record-breaking term. It was a season that saw the Zerofivers move into a new home, undergo massive personnel changes and play a bit-part role in European football.

A total of 58 points, a fifth-placed finish and the chance of European football had ignited a football fever in the city after 2010/11 season. But it was a summer that saw numerous departures. André Schürrle, who had scored 15 goals during the previous term, left for a club-record fee to Bayer 04 Leverkusen, Lewis Holtby and Christian Fuchs both went to Schalke 04, while Miroslav Karhan returned to his home country. Ádám Szalai was still out with an ACL injury suffered during the previous season, and would miss the entirety of the Hinrunde. The “Bruchweg Boys” had broken up, leaving Thomas Tuchel short on players.

Julian Baumgartlinger joined the club from Austria Wien, Eric Maxim Choupo-Moting from Hamburger SV, Nicolai Müller from Greuther Fürth, Zdenek Pospech from Copenhagen and Anthony Ujah from Lillestrøm. These signings would all go on to feature regularly for the club, but it would take time for the new-look side to gel.

Tuchel had been forced into wholesale changes. “We’ll try to come through these changes and reach a similarly high level,” Mainz’s head coach told the Rhein-Zeitung. But before the season could start, the newly formed team took its first blow. The grand opening of the newly built Coface Arena would was supposed to be a joyous occasion with a Europa League qualifier against Romanian side Gaz Metan Medias, but the Zerofivers struggled to have any real impact on the game, and Niko Bungert’s headed goal was cancelled out. 1-1 after the first leg. Mainz would have to go to Romania for the second leg looking for the win, but another 1-1 draw on the night sent it to extra time and penalties, which FSV lost 4-3. Mainz were out before their European adventure had even really begun.

“There was a deathly silence the night after the Medias game,” Niko Bungert later reported. “The gaffer finally found the right words in the first training session after the match. Then there was only excitement for the Leverkusen game and lots of confidence.” Tuchel had preached that the greatest enemy is self-pity, and this disappointment would bring them closer together. The result: Mainz bounced back with an “impressive response to that setback”, as the Rhein-Zeitung put it, and won their first match of the Bundesliga season 2-0 against Bayer Leverkusen. A week later, the Zerofivers brought all three points back from an away trip to Freiburg, and they were back on track. Or so it seemed.

Then came the collapse: nine games without a win, five home defeats in a row and only nine points in the back. FSV dropped down to 15th, level on points with HSV just one spot below. Frustration all round. “I left the ground at half six, and didn’t say a word,” Tuchel said after the 1-0 defeat to Augsburg. The manager who had set the league alight just months earlier now came under fire.

But the painstaking hard work began to bear fruit. Changes to the system and squad were sinking in, and the team grew closer together. The real turning point came on matchday 12 and the famous home win over VfB Stuttgart. Just as in previous weeks, it looked like the team had a lot to offer, but once again the opposition opened the scoring. This time, though, the Zerofivers replied quickly. Anthony Ujah took his chance and grabbed the equaliser. The second half saw the completion of the comeback; Andreas Ivanschitz put Mainz in front, and Ujah scored his second and a ten-man FSV’s third – Eugen Polanski was shown a straight red card. Mainz also entertained in their following outing, securing a sensational three points at home against FC Bayern in a thrilling 3-2 victory.

Yet ending the Hinrunde with just 18 points and in 14th in the league hadn’t been quite the splash that Tuchel’s side had hoped to make. Yet the ­Rhein-Zeitung remained hopeful, stating that, in spite of massive changes to the squad, “the quality of the football is not reflected in their position in the table.” Even in a home defeat against eventual champions Borussia Dortmund, the team had shown their ability, even if they didn’t get the result. “It is reflected by their tally of just two away losses. No team has been superior to Mainz after matchday 8.” The shortcoming, however, was a failure to create and convert chances, which had cost Mainz several points.

Moving away from the drop zone

“We need to be patient, even if things aren’t going well,” Tuchel appealed to the fans. “The team has always had and does have talent. But you just have to wait and see how the Rückrunde goes.” And as far as scoring goals was concerned, some things did change. Christian Heidel bought Mohamed Zidan from Dortmund for his third stint at the club, and the Egyptian would go on to score seven goals in the second half of the season. Szalai also made his comeback from injury, pitching in with three goals. Mainz never really looked in danger of relegation throughout the Rückrunde. When it looked touch and go in the table, Mainz found a way to win, 3-1 against Freiburg and 3-0 in Bremen. Draws against Schalke, Hoffenheim, Bayern and HSV ensured that eight points separated Mainz from the relegation zone.

A disappointing final-day defeat to Gladbach made the Mainz management doubt for the first time “whether the quality is really there to maintain a mid-table spot,” as the Rhein-Zeitung wrote. However, successive seasons achieving mid-table finishes would dispel these concerns.