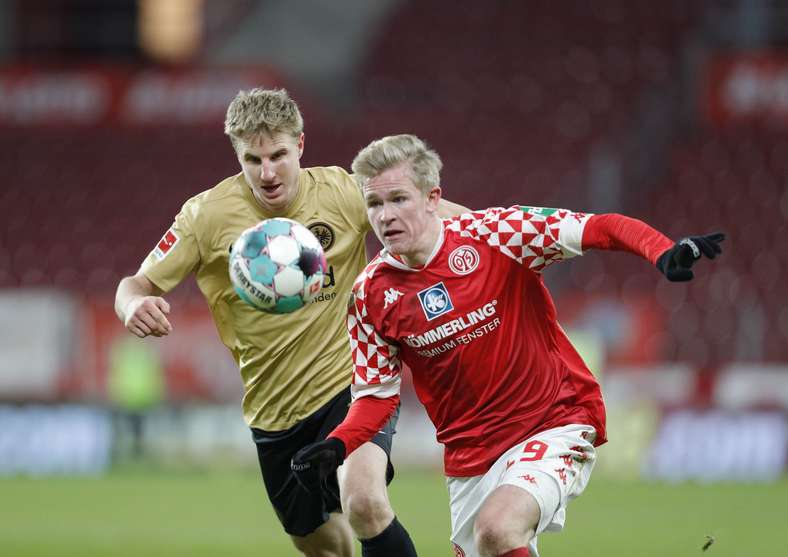 Due to two penalties by Eintracht goalscorer André Silva, the debut of Mainz 05's new head coach Bo Svensson was an unhappy one. The Rheinhessen side were beaten 2-0 by their Main rivals after 90 minutes. Two penalties initially awarded to Mainz in the second half had to be taken back by referee Bastian Dankert after viewing the video evidence. Mainz also missed several good opportunities after the break, and therefore Eintracht took the three points from the OPEL ARENA not undeservedly.

The new head coach made three changes: Robin Zentner returned in goal for Finn Dahmen, Moussa Niakhaté returned to the starting eleven after serving his ban and replaced Phillipp Mwene, while Kevin Stöger was preferred to Edimilson Fernandes. On his debut, ex-player Svensson opted for a 4-2-3-1 formation with Niakhaté at left-back and Jonathan Burkardt the only striker.

The story of the first half can be told quickly: After a first warning shot by Leandro Barreiro (4'), the Zerofivers lacked the desired determination as well as the tempo in their forward play. Eintracht did not do much better and only had one real chance to score when Zentner passed his first test against Filip Kostic (13'). But because Niakhaté was too late against Silva after 23 minutes, he pulled the Portuguese by the jersey and Dankert immediately pointed to the spot, the Hessians took a 1-0 lead through the fouled player himself midway through the first half (24'). The goalscorer kept his cool from eleven metres and beat the Mainz number one. Annoyingly for the hosts, five minutes later the whistle was silent after a hard tackle by Djibril Sow on Burkardt and a possible penalty wasn't given (29'). Without any further goalmouth action worth mentioning, the visitors went into the break with a narrow lead.

Chances on both sides, Silva seals the game from the spot

After the restart - both teams had returned to the pitch unchanged - the Zerofivers were initially lucky that Frankfurt were unable to take advantage of three good opportunities in the first few minutes through Kostic (46'), Durm (47') and Silva (48'). Mainz struggled to find their way into the game, but almost out of nowhere they almost equalised a little later. Robin Quaison had served Burkardt who, after a one-two with Jean-Paul Boëtius, found himself free in front of Kevin Trapp but put the ball a good metre wide of the goal (54'). A wake-up call? At least Mainz stayed in it and two minutes later the homegrown player again sniffed at an equaliser when his header from Stöger's cross hit the post (56'). The match now gained momentum and Mainz pressed for the equaliser, which they seemed to be very close to after an hour. Dankert again pointed to the spot after an alleged foul on Barreiro, but took back his decision after the video referee's advice - a comprehensible decision (61'). However, Mainz were not discouraged by this, because in the 64th minute Burkardt again appeared free in front of Trapp, but this time failed due to a save by the goalkeeper.

Instead of the equaliser, Eintracht scored their second goal from the spot in minute 72: Niakhaté had knocked Martin Hinteregger down in the penalty area, actually without need, and it was Silva again who scored from eleven metres. It was a disappointing afternoon for the Frenchman and Mainz, with Karim Onisiwo replacing Stöger and driving the final attack. The next opportunity came shortly afterwards for Danny Latza, whose direct shot off a Boëtius pass was cleared by Durm just off the line (76'). For the Dutchman it should have been the final action, Levin Öztunali celebrated his return in the final quarter of an hour, while Jean-Philippe Mateta came into the game for Quaison. Nevertheless, the Red and Whites were not really compelling. And when they did find themselves in a promising position, they lacked the necessary accuracy in their finishing, such as Onisiwo, whose shot from twelve metres after a Barreiro pass landed well over the goal (83'). And that the penalty luck was on the side of the visitors this afternoon was clear at the latest in minute 89, when Dankert pointed to the spot for the fourth time after a handball by Ndicka, but took the penalty back again, as the offence had taken place outside the box. Because the four-minute injury time also passed without any further events worth mentioning, the visitors cheered a little later for the first time in Bundesliga history in the OPEL ARENA. Since Schalke 04 celebrated their first win of the season against Hoffenheim at the same time, the Zerofivers will be bottom at least until the visit of BVB next weekend.