FIRST POINT IN A MARATHON SEASON

Rouven Schröder after a joyless 2-2 draw against Schalke: "We will not lose faith" 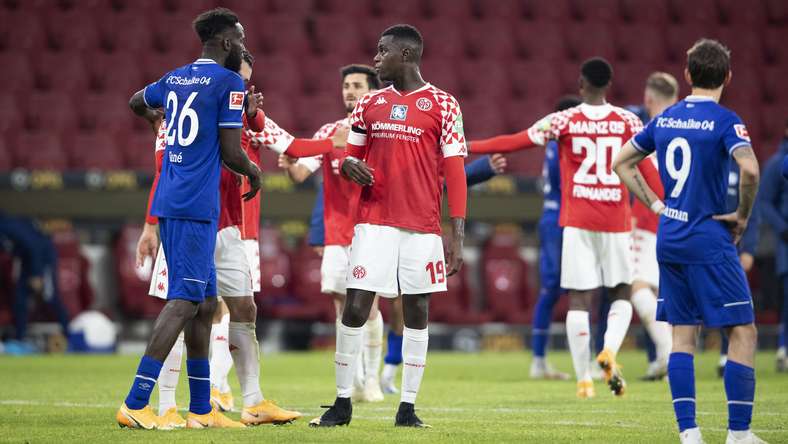 No-one was satisfied after the draw in the OPEL ARENA.

Ten years have passed since Mainz 05 set a Bundesliga record by starting the season with 21 points after seven matches to move top of the table. On the seventh match of the 20/21 season, Jan-Moritz Lichte's team avoided setting a new negative record. However, the first point, coming from a 2-2 draw against Schalke 04 gave little cause for joy. "It feels like a defeat," said Rouven Schröder.

After the final whistle, Schalke's coach who's also still without a win felt similar to Mainz and drew a conclusion that sums up the rest of the season for Mainz. You have to say goodbye to expectations that the road to recovery will be a sprint. "It will be a marathon," said Manuel Baum. At the Bruchweg, too, it is precisely this mixture of patience and continuous hard work that is called for. "It's a situation we have to get through," explained the 05 Sporting Director. "Despite everything, we now have the first point. It is very slow for everyone, also the teams around us, but we will not lose faith".

A great chance before the break

While the visitors from Gelsenkirchen primarily blamed the referee, including VAR, for not being able to go home with the three points, Mainz focussed on the chances missed with a 2-1 lead as the reason for more frustration at not achieving a first win. Referee Patrick Ittrich had video evidence that Matija Nastasic's foul on Jonathan Burkardt had been inside the box, therefore giving Daniel Brosinski the opportunity to make it 1-0. After Mark Uth's direct free-kick following Danny Latza's unnecessary foul on Goncalo Pacienca, Ittrich checked the replay and penalised Ozan Kabak for a foul on Jean-Philippe Mateta, again leading to a penalty, which the Frenchman safely converted to make it 2-1 lead.

After that, Mainz let a possible victory slip away. Seconds before the break, Mateta's chance was saved by Schalke 'keeper Frederik Rönnow. After the break, Burkardt failed from a similar position in the box, then Mateta failed again with the third big chance. "We are being punished for not making the most of our chances," complained Schröder afterwards.

And then, in the end, the team eventually got the equaliser. Once again it was unnecessary and more than unfortunate, as Robin Zentner parried a cross from Steven Skrzybski onto the shin of Jeremiah St. Juste, off whom the ball spun into the goal. "We had a lot of energy on the pitch, you could see in every single phase that the team wanted to get the three points for Mainz 05, but conceding these type of goals accompany us and that is extremely disappointing," said Schröder.

"We are annoyed that we did not win the game. We had three chances where we were one-on-one with the goalkeeper and didn't score to make it 3-1," said Jan-Moritz Lichte. "I can only say what I see. And I see that we have the opportunities and that we are not taking them. We would have liked to get three points. We didn't get them and it was because of chances where we didn't show the composure in front of goal. We will continue to work on that. We can't stop now."

The Mainz coach, who made several changes over the course of the game, including switching from a 4-2-3-1 to a 5-3-2 in the middle of the first half to stem the flow of Schalke players who cleverly avoided the Mainz Pressing, will continue on his path of meticulous work and analysis over the international break. "We will analyse this game, like all other games, calmly but thoroughly. We have now earned a point and were very close to winning the game. We have to deal with that. But of course we must also use this to show that we are close. If we have more consistent performances, then the results will come. We will work to be more ruthless in front of goal in the coming games".