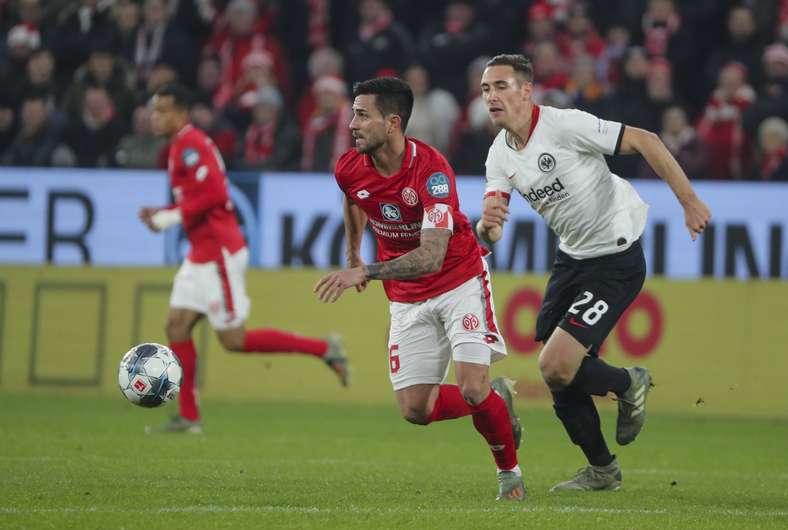 Good memories: Mainz captain Danny Latza during the home win against Eintracht in the first half of last season.

Bo Svensson has been in office as the new head coach of Mainz 05 for three days. On Saturday afternoon at 3:30pm CET, he will make his first appearance on the touchline at the OPEL ARENA against Eintracht Frankfurt. "This is a big task that we are facing and looking forward to," Svensson said at the pre-match press conference. Frankfurt are a "top team" against whom Mainz want to put in a passionate performance.

Svensson, his coaching team and staff have not have much time before the match with the SGE. But the new head coach used the training week, which started on Tuesday, intensively on and off the pitch to get to know his players better and to teach them the principles that are important to him. "The impression is very positive so far. They are open-minded guys who are ready to work" is how the 41-year-old describes the first contact with his new team. "We have to find a common path, they also have to get to know me. One week is not enough for that. But so far it's been very pleasant."

Svensson wants to convey to his team the things "that should distinguish us in Mainz" and are best seen on the pitch as early as Saturday against Frankfurt. "A team that presents itself as a unit, is passionate, has the desire to hurt the opponent and present them with problems," is how the Mainz head coach describes his ideas. He sees it as a long-term process to drive this development forward. "It's about focus and about following a common plan so that everyone knows what needs to be done."

Against a team with a strong line-up like the SGE, however, not only a good plan in terms of the game but also team spirit will play a decisive role. "The togetherness in the group is the spice, so to speak," Svensson describes the mood in the dressing room as an important ingredient for a possible derby victory. "Do they feel like showing the things on the pitch that are required? That's a project you have to nurture every day in your interactions." Svensson himself will try to give his team what they need from the sideline, he said. "The boys have to pull this thing off and put it on the pitch as best they can. I'll accompany and support that as best I can."

The head coach sees the opponents from Hesse, who are in eighth place in the table and have seven points from the last three games, as a big challenge. "You only have to look at the game against Leverkusen, which they deservedly won. They have quality in all parts of the team. Their football is offensive and attractive, with a clear signature of the coach," says Svensson.

"We have to stand for something"

So for the Zerofivers, it's all about the ingredients that the team has to process on the pitch into as tasty a game as possible that makes you want more for the rest of the season. "We have to stand for something in terms of substance. We will develop that every week in the long run so that this core of Mainz football is the focus. Because there are principles that are very important to me, no matter which opponent we play. But of course we have also been working towards Saturday's game against Frankfurt and the things we need then," Svensson emphasises.

The new head coach can also welcome back on Levin Öztunali and goalkeeper Robin Zentner, who are back in training and ready to go for the match on Saturday afternoon.