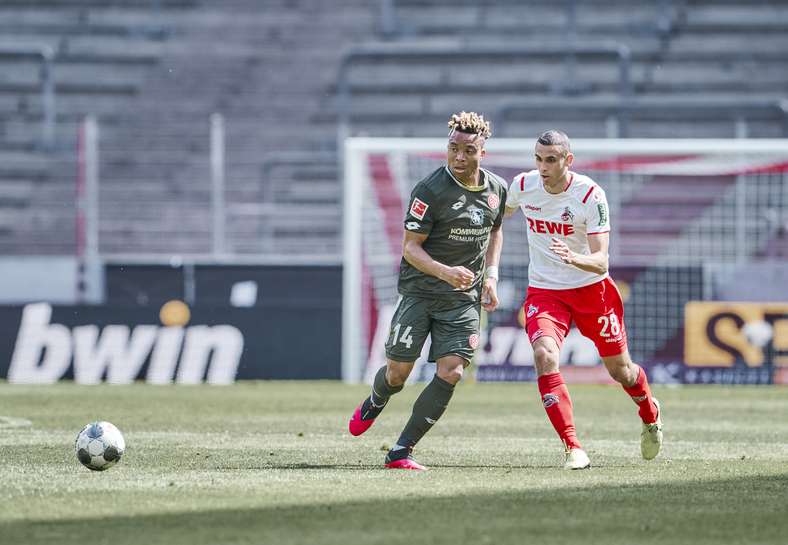 Kunde marked his first start since early February with a crucial goal for the Zerofivers.

Kunde Malong’s ability to power his way through a packed midfield and score is something the midfielder showcased twice during Mainz’ 5-1 win against TSG Hoffenheim in the first half of the season. Now, the Cameroon international crowned a successful comeback in Köln with a stunning solo effort to secure an important point for the Zerofivers.

Kunde won the ball high in Köln’s half in the 72nd minute and stormed towards goal, scoring to complete Mainz’ comeback from 2-0 down. His solo effort saw him shrug off six Köln players.

A goal for the team

“When I received the ball, I wasn’t thinking about anything. I was only focused on not losing the ball. I rewatched the video of it multiple times afterwards and you can see that I’m searching for space, for a gap to break through. I wasn’t looking for anyone else, just for a path forward. I saw the gap and took it,” was how the 24-year-old described the scene during a Skype interview on Monday. “It was the first game in a long time and I scored a goal, which was really exciting. But, the most important thing was the goal for the team, which reflected the mentality we were bringing to the game.”

Kunde’s last appearance in the starting line up was a completely different experience and cost him his spot amongst the first-team regulars. During the match at home against Bayern München, Kunde was taken off with his side 3-0 down and refused to high-five the head coach. He spent the next five games on the bench, making just three short cameos.

The decision was based on sporting grounds, said Achim Beierlorzer. “The matter was dealt with that day and was a thing of the past by our next training session. Kunde is a fine young man and a great footballer. In that instance, he did something he shouldn’t have done. Momentum was the decisive factor there. He didn’t play well, and then we brought in Danny Latza and Leo Barreiro, who both delivered strong performances.”

As elite athletes, there are certain mechanisms that dictate your progress. “A regular starter can’t expect to always be starting, but instead has to constantly prove he has earned his place and fight to stand out ahead of his teammates during training. The opposite happened here. However, I still chose him often because he wasn’t far off from where he needed to be. We need to have this level of competition within the team in order for everyone to remain on their toes and to give their best because they know that they have to. This winning mentality is important for our game,” said the head coach. “The players often speak of trust. However, I can only choose 11 players to start. I would place my trust in many, many more.”

Congratulations from back home

Kunde was also subbed off against Köln, but this time he wasn’t allowed to shake his coach’s hand due to social-distancing measures in place. “It was definitely a much better feeling,” said Kunde. He later received plenty of congratulatory messages, especially from friends and family in Cameroon. “They all congratulated me. That made me feel really good,” he said. However, it was more important for him to hear that everyone back home is healthy. “Of course I worry about my family in Cameroon these days, but we talk every day. They are doing their best there to keep the virus from spreading within the country and the continent as a whole, even if it’s difficult.”

Following their draw against Köln, the team’s quarantine period at the hotel has come to an end. The players will return home and prepare themselves for next weekend’s match against Leipzig. “It’s about being aware and handling the situation with caution, in order to avoid any unnecessary risks,” said Kunde. “We are being careful when we go out. We’re following the rules, regardless if we’re at the hotel or at home.”

Following the rules also applies to goal celebrations during matches. “In order to allow us to return to playing, there are several new rules that we have to obey. Of course it’s not great to not be allowed to celebrate a goal with your teammates the way you usually would. But, that didn’t make that goal any less special for me,” said Kunde.