Final game of the season not a "dead rubber"

The Zerofivers are looking to end the season on a high with a win against Bayer 04 Leverkusen. 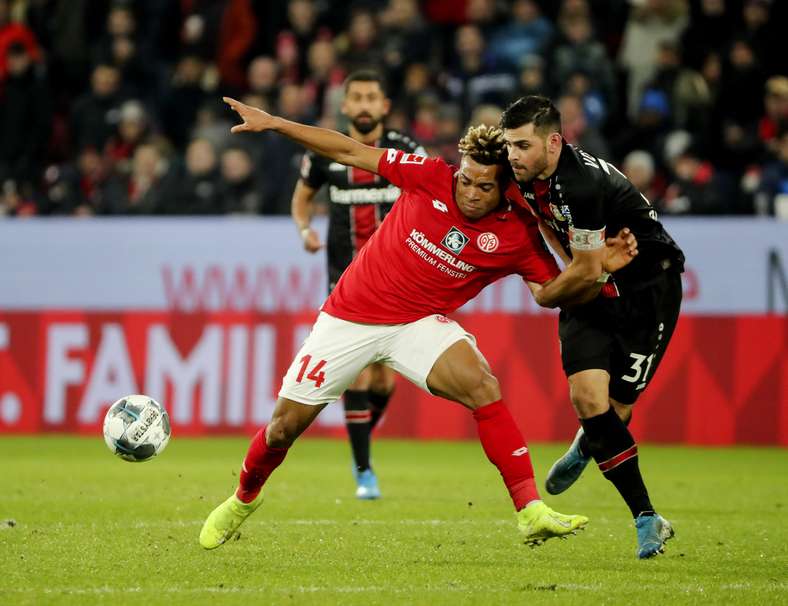 The Zerofivers concede an unlucky injury-time goal in the reverse fixture back in December.

Exactly six weeks after its original schedule had planned, the 2019/20 Bundesliga season is finally heading into the final matchday. 1. FSV Mainz 05 have one last tough task to complete when they host Bayer 04 Leverkusen on Saturday (15:30 CEST). Leverkusen are still fighting for Champions League qualification. “We’re taking this game very seriously. It won’t be a dead-rubber, final day game,” Achim Beierlorzer said in his press conference on Thursday.

After the restart following the coronavirus-enforced break, the Zerofivers managed to secure Bundesliga football for the twelfth season in a row, due in large part to a recent run of good form. Mainz have taken eleven points in their last eight games, and, as it stands, are thirteenth in the table. The 40-point-mark could also be reached this weekend should they win, but that will require one last top performance.

Convinced of their conviction

Mainz’s head coach remains hopeful that this will happen. “Of course, we’re really happy that we achieved our goal with one game to spare. I’ve taken stock of the team and am convinced that we’ll go into this game with the necessary seriousness, and also a bit of excitement. I believe that the boys are really looking forward to their last game.” And also continue where they left off in that 3-1 against Werder, of course.

Beierlorzer said that the team is motivated and the players are excited to put in another strong performance without the “terror” involved in a relegation battle. “Thank God that we’re not depending on results elsewhere anymore. So we can go out there and have fun,” Beierlorzer stated. “In recent weeks, the team has shown how football can be played. They really fought hard for the club and also for each other, and they played as a unit. That’s exactly what we’re looking to continue in Leverkusen now.”

The pressure is entirely on the ‘Werkself’, who no longer have total influence over their own chances to qualify for the Champions League. Leverkusen need to win and hope that Hertha BSC beat Borussia Mönchengladbach. That may mean that Peter Bosz’s side will look to attack as much as possible against Mainz. According to Beierlorzer, the task is then to blunt the opposition’s attacking ability, as they did in the win away in Dortmund. Mainz have to be compact and organised at the back, tactically disciplined and completely switched on. The Zerofivers will also have to beat Leverkusen’s aggressive counterpress and break with pace and accuracy, because Leverkusen often leave spaces at the back, which can be exploited.

It’s clear who the favourites are, but it’s been a similar story in other recent away games. Rouven Schröder was pleased with the team’s approach to preparations for their final game of the season. “It was nice to see how the team approached training on Wednesday. How they trained with enthusiasm, quality and looked fresh and happy. Each member of the squad wants to secure a starting berth,” said Mainz’s sporting director. Schröder hopes that the Zerofivers will try their hardest to take three points from this game against “top opposition”. Each improvement in Mainz’s position in the table brings the club extra financial benefits. Between one and three million euro in broadcasting revenue is up for grabs.

“The game is so important for us. So we’ll approach matchday 34 of the Bundesliga in the same we approach all of our games,” said the Zerofivers’ boss. “We’ve had a whole week after the Bremen game to recover from a tiring two-game week. I’m convinced that all those, who are training, will be fresh enough for Saturday. We’ll make sure that we play with the best possible eleven, and squad, against Leverkusen, and finish the season on a high.”

Jean-Paul Boëtius (suspended) and Taiwo Awoniyi (concussion) are both unavailable.