Achim Beirlozer's thoughts on the Zerofivers' outing in Cologne. 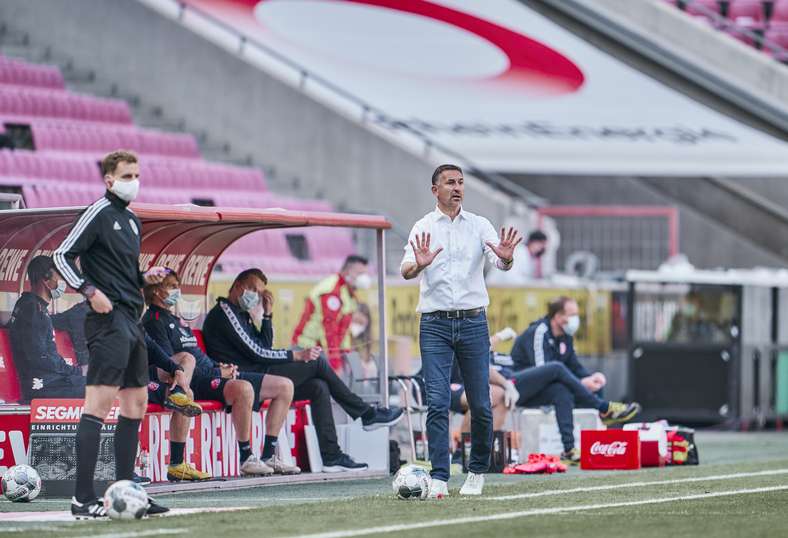 Beierlorzer: "The players believed in themselves."

An air of ease has returned to the club following the Bundesliga restart. Achim Beierlorzer’s team gave a good display in Cologne, and looked to be free of cobwebs after an eight-week break. The players’ fighting spirit was on show for all to see.

With a point on matchday 26, the Zerofivers maintained their four-point lead on Fortuna Düsseldorf in 16th, and have now put nine points between themselves and the drop zone. Mainz will be heading into the coming busy week with renewed confidence, starting with a home fixture against high-fliers RB Leipzig.

“The team showed a desire for football,” said Beierlorzer, who addressed the fans at the start of the week. “I have to heap praise on our fanbase. I know that the fans are suffering. We’re suffering for the fact that we’re playing without them and that it’s not football as we all want it,” the 52-year-old explained. “I’ve  great respect for the fact that they’re accepting the decision and thereby allowing lots of people to continue doing their jobs. Because that’s the fact behind it all.”

The Mainz boss said that the appearance in Cologne had been a good one. The team had done exactly what Beierlorzer had asked of them during the week of training preceding the game. However, he said that there’s still room for a lot of room for improvement, especially when you consider both of 1. FC Köln’s goals. Beierlorzer identified a lapse in communication between the centre backs when the home side went in front. “Neither of them went to challenge Cordoba, and we actually trained to close down the man in Uth’s position. Whether it was a penalty is up for debate,” Beierlorzer said. Köln’s second was gifted to them by a lack of awareness to the quick freekick.

However, among the positives were the Zerofivers’ morale and mentality. Despite being two goals down, the Zerofivers never rolled over, and pressed for the equaliser with great spirit and tenacity. “The amount of sprints completed shows that we never gave up. The players believed in themselves,” said FSV’s head coach. “But we need to combine possession with penetration. We can play better on the ball, because we were too happy having a lot of possession without moving the ball up the field. We can do that better.”

Beierlorzer explained that he is not surprised by his team’s performance, because he’s seen all of the these qualities in training. “It’s been so hard to choose a starting eleven in such a short space of time, because a lot of the players have done really well.” He went on to state that he was happy with the starting line-up, especially with Kunde Malong and Edimilson in the double pivot and Jean-Paul Boëtius in a more attacking role. “Leo Barreiro and Danny Latza have been doing well in training too, but I thought the others were just a little bit further along.”

There were two more reasons to be cheerful: namely, Ji Dong-Wong finally making his debut and Taiwo Awoniyi grabbing his first Bundesliga goal for the club. Beierlorzer sent the Liverpool loanee on in place of Karim Onisiwo midway through the second half. “Taiwo has always ha an extremely good attitude. He’s continuously worked very hard. He was great in our intra-club games; he assisted goals and was generally very effective. That’s what he’d been lacking before. He could’ve grabbed another goal, if he hadn’t missed out on Áaron’s precise cross.”

Now though, thoughts turn towards a tough tie with a strong Leipzig side this Sunday. There are no personnel issues and no new injuries. Jean-Philippe Mateta may play again after serving a suspension.