FAIR DRAW IN THE RHINE-MAIN DUEL

Zerofivers concede late in the 86th minute, but take another big step towards staying in the league with the points shared 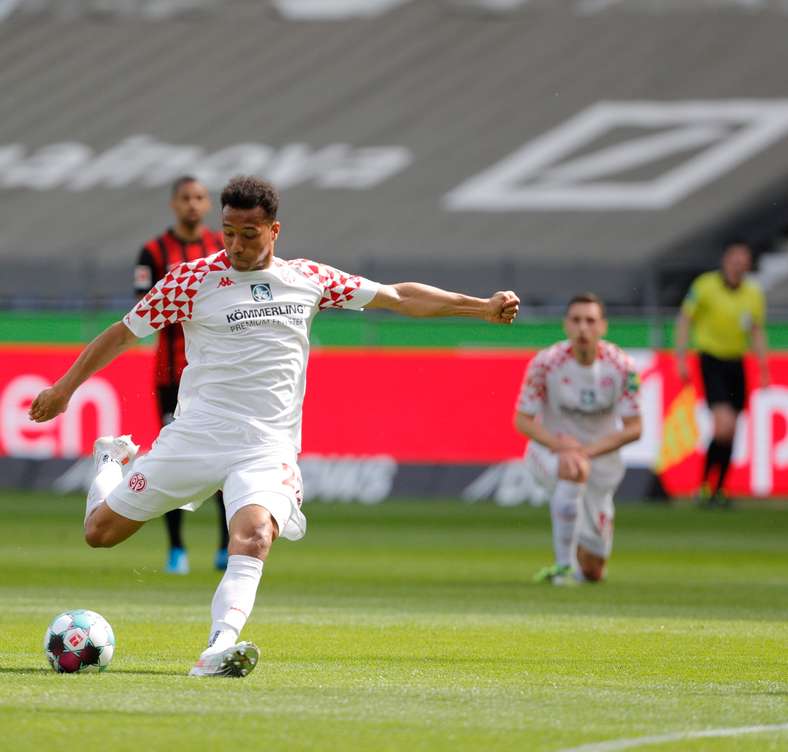 The Zerofivers sniffed safety, but finally managed an important draw in the Rhine-Main duel and are now unbeaten in seven away games: The Zerofivers demanded everything from Champions League aspirants Eintracht Frankfurt in a 1-1 draw at Deutsche Bank Park on Sunday afternoon and, after taking the early lead through Karim Onisiwo, thought they were on the winning track until the final minutes. The equaliser for the hosts, who had not been able to come up with much for a long time, finally came in minute 86 when Ajdin Hrustic scored a very strange goal from a seated position. All in all, it was a fair draw. While Mainz had missed the chance for a decisive goal 15 minutes before the end through Onisiwo, Eintracht could have won it in injury time.

Bo Svensson made three changes from the draw against Hertha BSC. Alexander Hack took over in the centre of defence for the suspended Stefan Bell, while Robin Quaison and Jonathan Burkardt were preferred to Jean-Paul Boëtius and Ádám Szalai. Which meant that the Zerofivers started with three attackers, similar to against Bayern Munich.

Onisiwo brings out the hammer

There was no long feeling-out period: The visitors had the first chance after just over 30 seconds when Burkardt tried to score but failed to beat Kevin Trapp (1'). After this first warning shot of the match, the hosts took control and were visually superior in the early stages, but without creating any chances. On the contrary, the Zerofivers also had their second chance of the match, and it was to be a real success: After winning the ball, Dominik Kohr was quick as a flash and served Onisiwo, who did not have to ask twice from 20 metres and marked the early Mainz lead with a determined finish (11'). The first chance for Eintracht, who had to shake themselves for a moment, followed in minute 20 when Luka Jovic's deflected shot whizzed past the goal. Again, only one minute later, things got really dicey for the first time, when Robin Zentner cleared a volley from Filip Kostic with one hand - a brilliant save! (21').

However, the first two chances for the hosts did not herald a Frankfurt storming run because Mainz worked in a disciplined manner against the ball, hardly offered any space to the opponent and switched quickly after winning the ball. After such a move, Burkardt's shot landed over the goal after half an hour (33'). Not much else happened in the first 45 minutes in warm temperatures, Jeremiah St. Juste ignited the turbo in minute 37 and was able to thwart André Silva's best Frankfurt opportunity at the last second.

A lot of idling & a curious balance

Both teams came back unchanged. Frankfurt continued to struggle against a compact Zerofivers, and a first attempt by Daichi Kamada from the edge of the penalty area landed about two metres off target (52'). After just under an hour, the visitors made their first change when Boëtius came on for the injured Robin Quaison (56'). However, there was a lull in front of both goals: Not until minute 70 did Eintracht sub Amin Younes have a chance to score, but his shot was safe for Zentner.

With a narrow lead, the match went into the final phase of a match that had few chances but was exciting at all times. And in the 75th minute, Onisiwo had his second chance: Burkardt had sent the Austrian forward from his own half, but the scorer of the first goal put the ball a little too far in front of him and could not overcome Trapp for the decisive goal (75'). When there was no sign of another goal, the Hessians finally managed to equalise four minutes before the end: more by chance than anything else, the ball landed on Ajdin Hrustic after a shot had been blocked, and he beat Zentner from a sitting position with a lobbed shot (86'). Eintracht now pressed again and in the first minute of injury time St. Juste's leg prevented Frankfurt from taking the lead (90+1'). It got really tricky again and a shot by Silva also missed the Mainz goal by only centimetres just one minute later (90+2'). It was to be the last chance of the game, the Zerofivers managed to hold on to the draw and take another important step towards staying in the league.

36 points from 32 games are on the books after the match on the Main, the ninth game in a row without defeat. Next Sunday evening (6pm CET), Mainz will face Borussia Dortmund at the OPEL ARENA.