FACTS ABOUT THE RHINE-MAIN DUEL 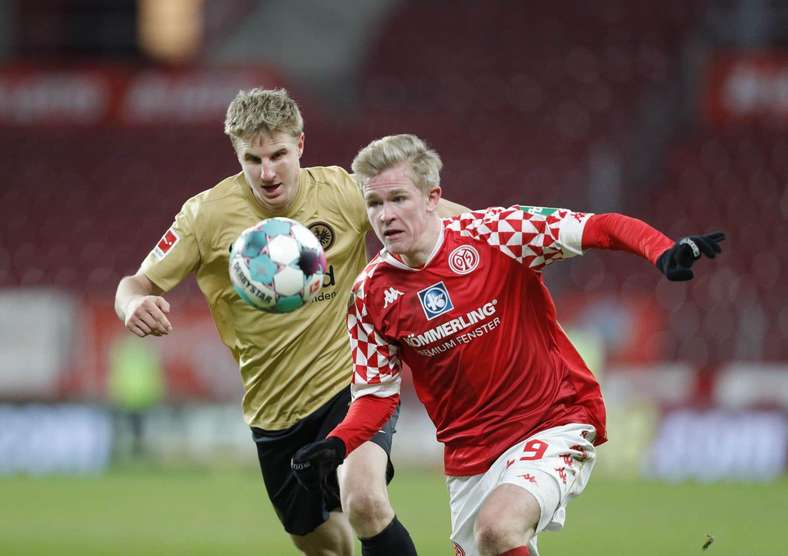 Jonny Burkardt in a duel with Frankfurt's head of defence Martin Hinteregger.

The third-placed team in the second-round table plays the fifth-placed team: On the 32nd Bundesliga matchday, Eintracht Frankfurt and Mainz 05 will face off in a neighbourly duel on the Rhine-Main. There is a lot at stake for both teams: The Eagles are fighting for a place in the Champions League, while Mainz is still battling to stay in the league. "We know that a very difficult task awaits us in Frankfurt, which we have to face. We need a complete performance to have a chance there," said 05 head coach Bo Svensson ahead of the appearance at the fourth-placed team in the table on Sunday afternoon (3.30pm CET).

The Rhein-Main duel has taken place 25 times so far in Germany's top division - and the Mainz side has a positive record. The Zerofivers have won nine of the encounters, with nine draws and seven victories for the Hessians. In the first leg of Svensson's debut as Mainz head coach, Frankfurt's goalscorer André Silva was the match-winner with two penalties.

Facts & Figures for the match

Despite the recent away setbacks (defeats in Mönchengladbach and Bayer Leverkusen), Frankfurt are playing a historically good season. Only in the 1991/92 season, in which the SGE almost became champions, did the Hessians also have the equivalent of 56 points on their account at that time.

For the Zerofivers, the three remaining matchdays are against Frankfurt, Borussia Dortmund and VfL Wolfsburg, all top-five teams fighting for the two remaining places in the top flight after Bayern and Leipzig.

Two years ago in the 2018/19 season, Eintracht, currently fourth in the table, were also in a Champions League spot until shortly before the end of the season. At that time, however, the SGE subsequently lost the last three games of the season, including at home against Mainz (0-2), and ended up seventh. At least that can't happen to Hütter's eleven this time: Sixth place (and thus Euro League participation) is already assured for the Frankfurt team.

Since Bo Svensson became head coach in Mainz, the Zerofivers have collected 29 points in 17 games and are now in a non-relegation place. This gives the Danish ex-professional the best points average of all Mainz Bundesliga coaches so far (1.71 points per game).

A power at home

Besides Bayern Munich, Eintracht is the only team without a home defeat in the current Bundesliga season (9 wins, 6 draws). In fact, the Hessians have not lost at home in 17 Bundesliga games this season, the longest streak in 28 years. Their last defeat at home was against Mainz: In June 2020, the Zerofivers triumphed in Frankfurt with a 2-0 win.

SGE midfielder Stefan Ilsanker played for the Zerofiver youth team between the ages of nine and twelve. At that time, the Austrian was still between the posts - just like his father Herbert, who was a goalkeeper for the Rheinhessen side from 1998 to 2001, played in five Second League and one DFB Cup match and had Jürgen Klopp and Torsten Lieberknecht as team-mates, among others.

No other Bundesliga team has hit the crossbar or the post as often as Mainz this season (17). By comparison, Frankfurt have only hit the post nine times so far.

André Silva is likely to be under special scrutiny on Sunday, and not just by the Mainz fans. With 25 goals in the season, the current SGE top scorer is only one goal away from the Frankfurt club record. That was set in 1976/77 by Eintracht legend Bernd Hölzenbein with 26 goals. In total, only the Bayern strikers (46 goals) have scored more goals this season than the Eintracht attackers (31).