FACTS ABOUT THE MATCH AGAINST HOFFENHEIM

Both teams looking for a clean sheet, a memorable home win in May 2019 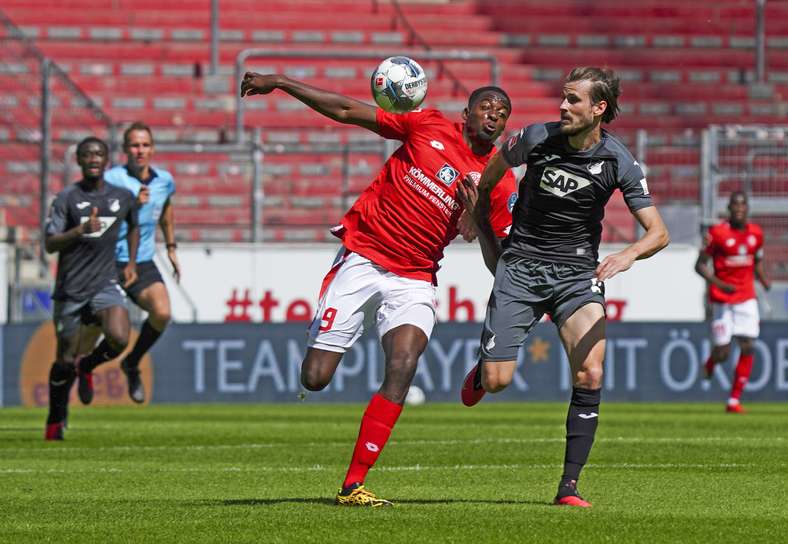 In the second half, Mainz were unluckily defeated 1-0 by Hoffenheim, having won the first leg in Kraichgau 5-1.

Last weekend it finally worked out at the eighth attempt with the first victory of the Bundesliga season. After the 3-1 win against Freiburg, Mainz wants to follow up on Sunday evening from 6pm. In order to put the plan into practice, the same intensity and willingness to run will be required as recently in Breisgau, where the Mainz team achieved a best result of the day with 123 kilometres run. And Jan-Moritz Lichte is optimistic after the week of training: "There was no sign of anyone running with one or two percent less," said the head coach at the press conference.

The record against Sebastian Hoeneß' team is balanced: Of 24 matches in the Bundesliga, Mainz have nine wins and seven draws. Hoffenheim came off the pitch as winners eight times.

The attack, led by Jean-Philippe Mateta (7 goals in 8 matches), has played its part in the four-point haul from the last two matches, in which the Zerofivers scored five goals - the same number as in the first six matches. The team also scored more goals against Freiburg than ever before this season (22).

Calmness in front of goal

The red and whites have recently made progress in creating big chances and rank fifth in this statistic. The fact that ten opponents have scored more often proves that there is room for improvement here, as the head coach also emphasised at the press conference: "We have energy and dynamism in our attack, but we must continue to train the quality in the final third," said Jan-Moritz Lichte on Friday afternoon.

The three Mateta goals in Freiburg were not only extremely important but also historic. Never before has a player from Mainz managed a flawless hat-trick, i.e. three goals from the same player in one half without another goal in between.

Waiting for a clean sheet

Hoffenheim is still waiting for the first win-to-nil this Bundesliga season. In the last three games alone, they have conceded eight times, and in light of the defensive gaps, goalscorer Andrej Kramaric, who returned after his coronavirus infection (7 goals in 4 games), has not yet been able to lead the Kraichgau team to their third victory of the season.

A problem that is well known to Mainz. The Zerofivers have not yet managed to keep a clean sheet this season (most recently in the 2-0 win against Dortmund in June 2020). A goalless draw tomorrow seems unlikely anyway. In the 22 Bundesliga games between the two teams so far, the only 0-0 came on 16 March 2013 when 'keepers Christian Wetklo and Heurelho Gomes kept clean sheets.

Hardly any other team seems to suffer as much from the exclusion of the fans as Mainz. Since the lockdown in March the Zerofivers lost six of its eight home games. So far this season the team has only scored one point in its four matches at home. What gives hope: Mainz has never been without a win in the first five home games of a Bundesliga season.

The last home win against Hoffenheim was on 18 May 2019, and it was also the farewell game of Niko Bungert, who ended his career after that game. In the game he not only hammered a Scorpion kick on goal (according to this editorial team, the ball was behind the line, the goal-line technology already on a summer break), but also showed a rock-solid performance as head of defence, in which little indicated that retirement was only a game away. Since his decision to hang up his boots, the following farewell was probably one of the most emotional and tearful in the history of the club.