FACTS ABOUT THE GAME AGAINST BAYER LEVERKUSEN 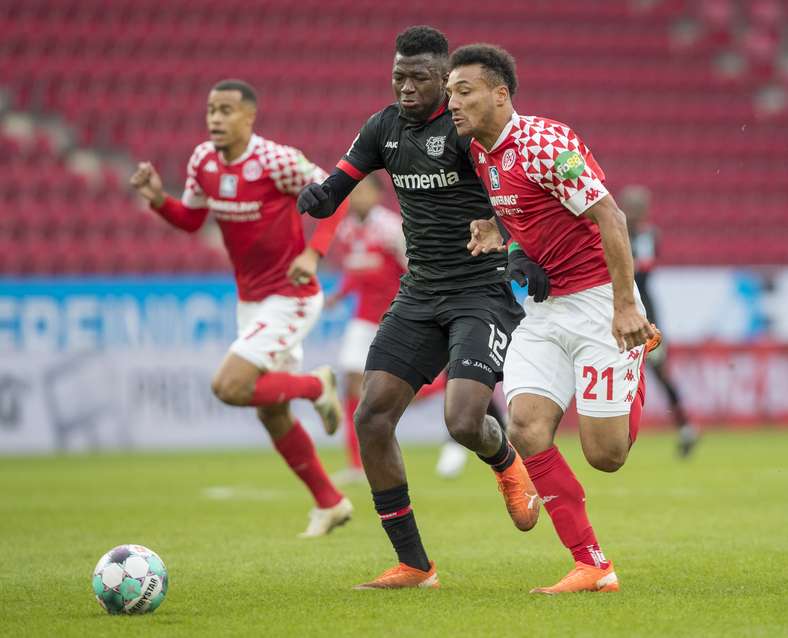 Karim Onisiwo in a duel with Bayer defender Edmond Tapsoba during the 0-1 defeat in the first leg.

Leverkusen, away, Carnival weekend: The Zerofivers have good memories of this combination. Back then, on 25 February 2017, Stefan Bell and Levin Öztunali, two players who are still in the Mainz 05 squad, scored the goals in the team's 2-0 away win at Bayer 04. Now, in times of the Coronavirus pandemic, neither can Carnival be celebrated to the usual extent, nor can the Zerofivers be accompanied by costumed fans to the away game. "Times are hard for everyone, and I hope that we can contribute with our football so that people can still have some joy at home this weekend," head coach Bo Svensson expressed the feeling ahead of Saturday's match.

To do so, Mainz will have to put in a good effort again. In the seven Bundesliga games after the away win against the Bayer team in February 2017, the Rheinhessen side only managed to win one game. Overall, however, the Mainz's record against the top team from the Rhineland is only slightly negative. Ten victories are offset by four draws and 15 defeats.

"Leverkusen have high individual quality in all parts of the team. We can expect an extremely difficult task. Therefore, we will choose an approach that we believe can cause Leverkusen problems," said Svensson in the press conference on Thursday.

The trend is right

Mainz have picked up seven points in the six Bundesliga games under Bo Svensson, which is already one more than in the first 14 games of the season. The Rheinhessen side celebrated two of their three victories in the last three games.

The table since halfway is fun to look at

In the second half of the season, Mainz picked up twice as many points (6) as Leverkusen (3). Since halfway, Mainz are in sixth place, while Bayer are in 10th.

Penalty record goes on and on

Mainz 05 have converted all 30 penalty kicks in the Bundesliga since May 2013, which is a running historical Bundesliga record. Most recently, against Union, Moussa Niakhaté was on the spot for the first time as the ball hit the inside of the post and went in.

Leverkusen went through a bit of a slump starting with the 1-2 loss against Bayern on Matchday 13, but overall the points tally is respectable. With 35 points after 20 matchdays, the Werkself has its best record in seven years.

Dominik Kohr, Danny da Costa and Levin Öztunali were all once players for Bayer Leverkusen. Kohr scored his last Bundesliga goal in a match between Leverkusen and Mainz. On 9 September 2017, he gave Bayer a 1-0 lead away at Mainz, but ended up with a 3-1 defeat (Öztunali had 2 assists) - that was the last time Mainz scored against Leverkusen. Kohr has been waiting for a goal for 80 Bundesliga games.

05 newcomer Robert Glatzel made his Bundesliga debut against Union Berlin as a substitute. He has also had good experience against Leverkusen. In February 2019, he managed a coup against Bayer in the DFB Cup with Heidenheim, winning 2-1 at home in the round of 16 (followed by the spectacular 4-5 at Bayern in the quarter-finals with three Glatzel goals).

Leverkusen have won the last 3 meetings against Mainz 1-0. Now there could be a peculiar record: In Bundesliga history, no team has ever beaten another 4 times in a row 1-0.