FACTS ABOUT THE MATCH WITH DORTMUND 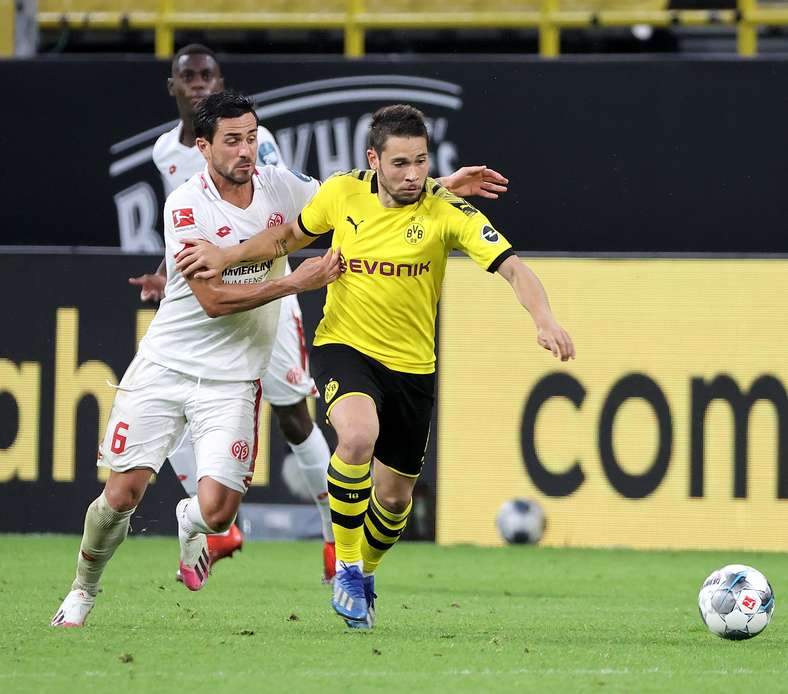 Mainz captain Danny Latza and Raphael Guerreiro could have another thrilling duel on Saturday.

"Of course, a lot of things have to come together if you want to be successful in Dortmund. Nevertheless, the goal for us remains to deliver a consistent performance over 90 minutes," said 05 head coach Bo Svensson ahead of the match at Borussia Dortmund on Saturday afternoon. In particular, Mainz have managed to do just that in two of the past three games away to Dortmund, but this is unlikely to be very meaningful ahead of the upcoming match. Especially since the hosts are the clear favourites going into the match, given their overall record and the trend of recent weeks.

The Black and Yellows have won 16 of the 28 meetings in the top flight, while the Zerofivers have been able to celebrate five times so far. In the 14 encounters at Signal-Iduna-Park, Mainz have won two and drawn four.

After 15 match days, Mainz have only six points and eleven defeats to their name - at this point in a season, these are each new negative records for a club in the Bundesliga.

A glimmer of hope?

In Dortmund, the Zerofivers have looked good most of the time. The historic first away win in May 2018 was followed by a narrow 2-1 defeat in the following season and the landmark victory in June last year.

Breaking records with his left foot

BVB goalscorer Erling Haaland has scored 25 goals in his first 25 Bundesliga games - a new Bundesliga record. The previous record was held by Uwe Seeler (his grandson Levin Öztunali could celebrate his return to the starting eleven on Saturday) with 23 goals in his first 25 games. So far this season, the Norwegian has scored twelve times, ten of them with his left foot.

With 26 chances created, the Zerofivers are in seventh place in the league, but at the same time have already allowed 28 of them (15th place in a league comparison). The 15 missed chances (13th place) also underline where Mainz need to improve in their fight to stay in the league. On average, only one shot in twelve end up as a goal.

It is all the more annoying that Jean-Philippe Mateta, the top scorer with seven goals, is in a slump of form and has only been used as a sub recently. The Frenchman scored from the spot in the victory in Dortmund in June 2020. "JP is trying to show himself, wants to prove that he absolutely has to play. I had several good one-on-one talks with him, he accepts the situation and handles it well," the 05 coach said on Thursday about Mateta.

BVB picks up pace after the break

BVB have scored 26 of their 31 goals this season in the second half and Haaland also has 21 of his 25 Bundesliga goals after the break. The Zerofivers, for their part, have conceded 22 of 33 goals after the restart.

Edin Terzic (four) and Bo Svensson (one) have the fewest Bundesliga games as head coach of all current Bundesliga coaches. The BVB coach won three times (one defeat). Svensson's debut was unsuccessful with the defeat in the Rhein-Main duel.