Everything down to the last detail 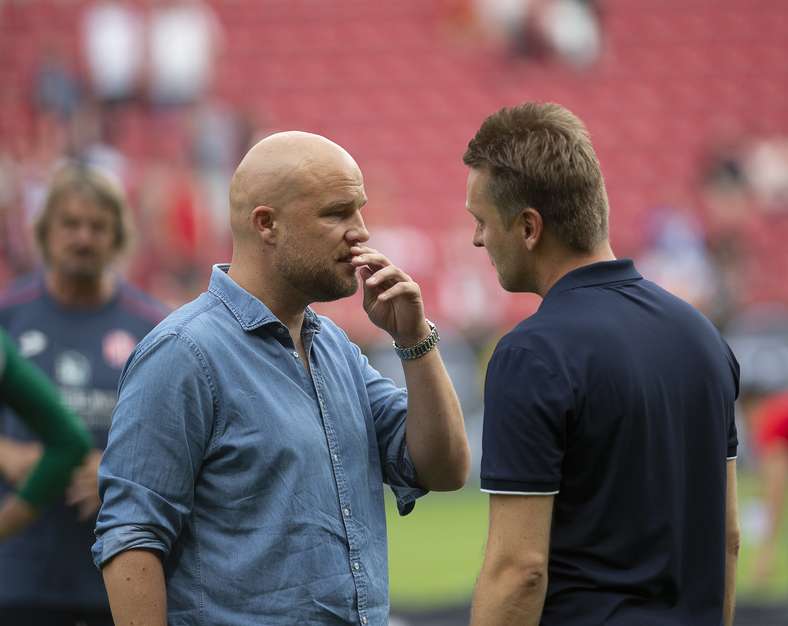 As of Monday, the Zerofivers along with the coaching and support staff have been staying at the Favorite hotel in the Volkspark, and are commuting to training at the Bruchweg. The team are currently in the midst of a week-long quarantine, as mandated by the DFL. Achim Beierlorzer and his men will get their season back underway on Sunday with an away game against 1. FC Köln.

Preparations for the remainder of the season are in full swing and are similar to those in training camp. “We started well. So far, everything has gone off without a hitch,” Darius Salbert said during a Skype press conference on Tuesday, during which the team manager, along with sporting director Rouven Schröder, spoke to journalists about the team’s schedule during this highly unusual week. “From day one, we are trying to do our best to minimize the risk of infection and want to put our plan into action as best as possible.”

An entire floor to themselves

Before heading to face Köln, the team will spend the week at the hotel and at the Bruchweg training ground. According to Salbert, this is not much different from what the team usually does during training camps. The only difference is the many restrictions and conditions that everyone is obligated to observe. The team has taken over an entire floor in the Favorite, where all 40 members of the Mainz delegation are staying. Additionally, there are three or four people who are with the team out of professional reasons, and who are living in a separate wing. Other than that, all the Zerofivers are staying in their own rooms. “We haven’t seen a single soul other than our own team,” said Salbert. The hotel includes a separate room for team meetings and meals, which is large enough to ensure that players are able to comply with the distancing measures. Everyone who enters into an area being used by the players must also keep their distance. A set group of hotel employees, who are undergoing regular medical screenings, are responsible for the team. During meals, there are no hotel employees serving the team. “Together with the hotel, we organised a buffet line,” said Salbert. The plates, already filled with food, are covered in saran wrap and laid out under heat lamps. “The most important thing is that we, together with the authorities and the staff at the hotel, have discussed every aspect of our stay down to the tiniest details while adhering to the various conditions and the strict hygienic measures,” said Salbert.

On Tuesday, every member of the team underwent both a PCR and antibody test. The next round of testing will be administered on Saturday morning ahead of the team’s final training session. “We’re hoping to have all the results before we leave that night. It would make everything a lot easier if we knew that everyone had tested negative and that all players are able to travel with us,” said Schröder. The team will travel on two busses to Köln, where they will then stay in a DFL-approved hotel that is able to meet the required hygienic measures.

After the match, the players will be allowed to return home to their families. Schröder sees an extended quarantine period as problematic, but added, “That would be another option. We don’t know how things will develop.” From a mental aspect, it could be difficult to have the players go into quarantine until the end of June. “It’s not the case that you’re just sitting in the Biergarten at the hotel. Instead, it’s a very clear division, as you don’t have contact with anyone. Right now, it’s important that we start to play again. Then we will see how it goes and whether or not our concept works,” he said.

As for the Zerofivers, they feel well prepared for the situation at hand. At the start of the crisis, every player received a pamphlet that explained in various languages which conditions they needed to obey. “The players obviously, same as everyone else, do not want to get infected. They ask a lot of questions,” said Schröder. “That shows us that they are eager to avoid doing something wrong.”