“Everybody needs to focus hard"

The roles for Mainz v Bayern are clearly defined - Debut for Bruma? 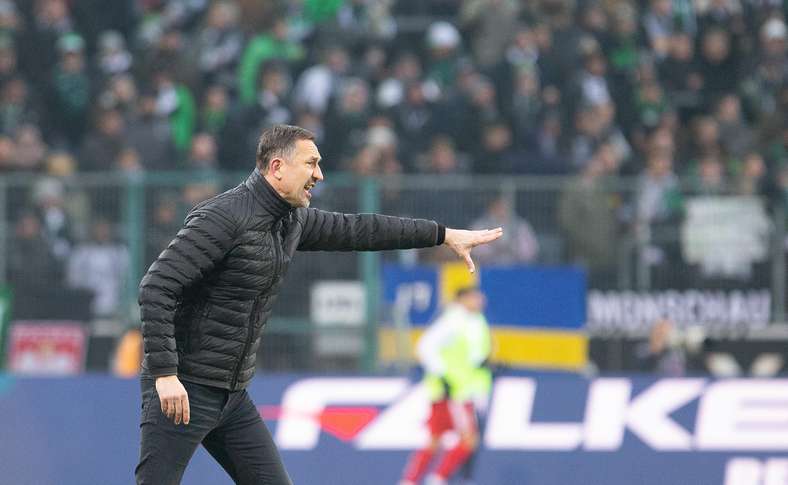 "It’s on me to get everyone to take stock of the situation and work hard to reverse it."

Whether recently-signed loanee Jeffrey Bruma starts in the heart of the Zerofivers’ defence in Saturday’s highly anticipated home match against FC Bayern Munich is still an open question. According to head coach Achim Beierlorzer, “there’s a possibility, but we do everything with caution and a cool head.”

On Wednesday, sporting director Rouven Schröder announced the loan deal for the 28-year-old Dutchman, who has been brought in to provide defensive experience in Mainz’ relegation battle. Beierlorzer described the central defender as a great header of the ball and strong in the tackle. “He’s an option in defence that gives us an alternative. We’re more capable of acting when we have a player, who brings this much experience to the dressing room. That’s really important for a young side like ours.”

The decision to bring in reinforcements this late into the transfer window was made due to Stefan Bell’s return to full fitness taking even longer than expected. Bruma trained with his new teammates on Thursday morning and is available for Saturday’s game against Bayern.

FSV’s last home win against Bayern came in November 2011. Since this 3-2 victory of Germany’s record champions, the Zerofivers haven’t tasted victory at home against the Bavarian giants. Taking a look at the current impressive form of the favourites, anything other than a Mainz loss would be an incredible upset. FS V need to take into account that defeat on matchday 20 in the Bundesliga could leave them in the relegation zone. “Obviously we don’t want to just write this game off. Of course not. The players are excited to give it a good crack. We are taking this as the absolute challenge,” said Beierlorzer, “but if we’re being honest, were it all to go according to the script, Bayern play their usual way and we don’t put in an astronomical performance, it’ll go bayern’s way.”

However, the FSV head coach spoke about this being a “bonus match”. A good performance against the best team in the league, who recently trounced an in-form Schalke side by five goals to nil, can be a very tough ask. “So we need to set up well, work well as a unit, disrupt their play and make life as difficult as possible for Bayern.”

“It’s all about being able to tolerate frustration. If you’re under the cosh and you’ve set yourself the goal of Bundesliga survival, it’s important to pull even closer together. I’ve said as much to the team this week,” the 52-year-old explained. “Everybody needs to focus hard on doing his own job and give it all they have for this football club.” The Zerofivers’ head coach has no doubts in the readiness of the team. “The boys are serious, but just lacking in one thing. We need to incorporate that now for the big games to come.” Beierlorzer said that the whole thing is only gettable through hard work.

Take stock of the situation and work to reverse it

“That’s the only way. We’re doing some detailed work to correct the things we’ve spoken about, and which have been prominent recently; defending set-pieces against Gladbach, converting chances against Leverkusen. We need to focus more in those deciding moments in a game like the one against Leverkusen; we lost all our structure at the end. It’s on me to get everyone to take stock of the situation and work hard to reverse it. I expect every player to do this in every training session right up until the end of the season.”

He remained critical analytical, but he wasn’t about to neglect the positives. “It’s not helpful if I just criticise my players, while expecting them to always be fresh and ready to go into the game full of courage and self-confidence.”

This is the case on Saturday, as Mainz take on Hansi Flick’s side, whose goal is natural to win the Bundesliga title. Bayern, according to Beierlorzer, are the number one team in the league in every possible aspect of a football match. “However, we just need to play our own game, find good balance and give it our all. We’ll definitely be 100% motivated and engaged!”