Rouven Schröder and Achim Beierlorzer on the Bundesliga restart. 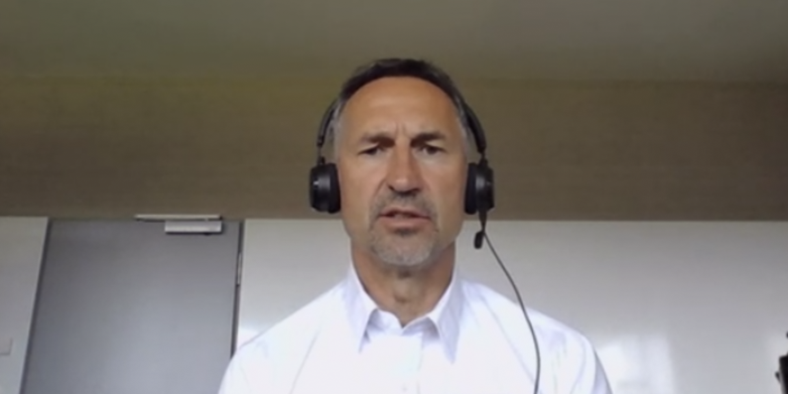 Achim Beierlorzer did his media rounds via Skype.

On Wednesday, the German government gave the green light for the Bundesliga to restart. The on Thursday, the DFL and all 36 professional clubs met and agreed upon a new schedule for matches. Two months later than planned, 1. FSV Mainz 05 will take on 1. FC Köln away from home on matchday 26 of the Bundesliga (Sunday May 17, 15:30 CEST). This is the first of nine league matches still to play. Rouven Schröder and Achim Beierlorzer gave us their opinions on this new situation.

With this new schedule, the Zerofivers have put their plans back by day, as it had been predicted that FSV would get underway on Saturday. “This means that Achim and his team have one extra day of training,” said the Mainz sporting director. “The extra day does us good in terms of training,” added FSV’s head coach. Mainz 05 had campaigned for all clubs to be afforded 14 days of preparation. “We clarified our position in good discourse at various levels. But if the majority are for restarting on May 16, then we’ll say, ‘we live in a democracy and are a part of the system’. So we’ve got accept it, get excited and go again. We finally have a structure to stick to,” explained Schröder.

The pros began training at Bruchweg on Thursday. From Monday, according to Beierlorzer, the team and coaching staff are going into a seven-day quarantine until the match. The Zerofivers will stay in their team hotel and use that as a base to go to training and back. As the club’s leadership emphasised, this quarantine will involve a lot strict. All procedures have been coordinated with the DFL, the hotel and local authorities.

There has been much discussion surrounding the DFL’s proposal. “At the end of the day, it’s only a good thing if we back it up by doing it. If each individual does their part to commit this concept to memory. It’s important that we are disciplined on the day and try to implement it all as best we can,” said Schröder. “We know that we’re fully in the public eye. After the first matchday, we’ll have to, once again, discuss whether it’s been strictly adhered to. But it’s important that all 36 clubs implement the concept with the utmost discipline, humility and empathy. We’ve been totally disciplined in term of hygiene, processing and social distancing for weeks.”

It’s clear to everyone involved that this must remain the case, and that the level of personal responsibility is high. “We’re taking this situation exactly how it comes. I think it’s still a huge relief in the midst of the overall craziness of this pandemic. It’s not just football that’s being allowed to return, restrictions are being eased in plenty of other areas as well. That’s very important,” said Beierlorzer.

“We’re also relieved that we now know what we can prepare ourselves for,” Beierlorzer said. “We want to get off to a good start in Köln. We should be looking forward to that and make the best of it. We will ensure the lads are well prepared, so that they are able to deliver a strong performance in this match.” The head coach called the current situation, “a bit of a return to normal, but it won’t be entirely normal.”

Every Bundesliga side will play nine matches behind closed doors until the season finale on 27th June. “We need to get used to this being reality. No one wants to play in front of empty stands, but there’s no other option at the moment, so we need to make it work,” said Schröder. What will happen after 30th June, and when the next season will get underway, remains to be seen. Going forward, creativity will be in high demand, with Schröder adding “The time for wishing for something to happen is over. We now need to make room for pragmatism."