After a miss opportunity against Augsburg, the Zerofivers are fully focused on Wednesday's game against BVB. 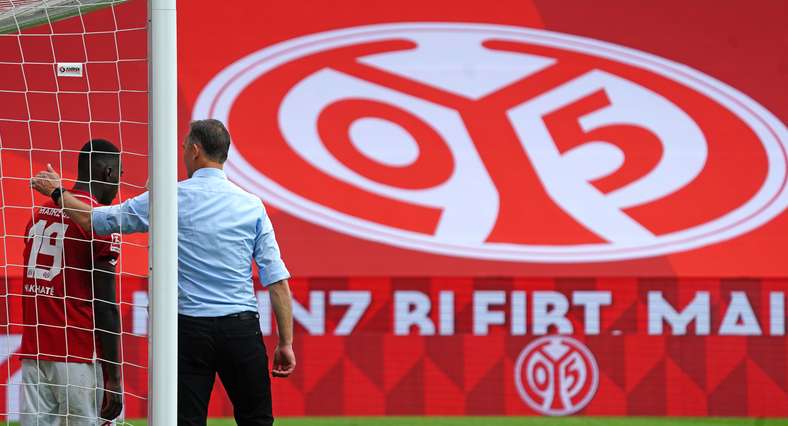 Ex-Zerofiver Florian Niederlechner’s goal after just 43 seconds was a very early winner in the OPEL ARENA on Sunday. In the remaining 89 minutes, 1. FSV Mainz 05 couldn’t find a reply to turn the game around. “It’s brutally disappointing for us,” Achim Beierlorzer said after the game. The Zerofivers return to action on Wednesday evening with an away fixture against Borussia Dortmund. The first of three remaining matches.

A missed opportunity to overtake Augsburg and put some distance between us and the drop zone was enough cause for concern. Compounding that then was the horrific injury to Taiwo Awoniyi, who collided with Augsburg’s Felix Uduokhai, fell to the ground and remained unmoving. The striker had to spend the night in hospital with a severe concussion, but was fully conscious and remembered everything. On Monday, Taiwo got in touch with some good news.

Beierlorzer believes the team should have had a penalty. “If a play gets there late, whether it’s with a foot or his head, then it’s a foul. If the player takes a shot and the other gets there late and catches him, the ref wouldn’t hesitate. So I don’t understand why he didn’t blow his whistle,” explained Mainz’s head coach.

Mainz had a plethora of chances to equalise. Karim Onisiwo had one, Jean-Philippe Mateta had a few before half time. The biggest of which came in the 39th minute: Robin Quaison played it through the back line, Mateta rounded the keeper but his shot was underhit and Augsburg could scramble back to clear. “The wrong decision, because you give the defenders time to get back and clear the ball away,” Beierlorzer said. FCA ‘keeper Andreas Luthe denied the striker’s powerful headed effort. “We had 17 shots on goal, we need to create something from that amount of chances,” said Mainz’s head coach.

However, in spite of the effort, in spite of the amount of running they put in, Mainz couldn’t find a way to overturn the early deficit. “You always go into games like that with full concentration, so in that regard we were a bit unlucky. The ball’s cleared but comes back at us, the striker catches it wrong but it hits the deck and balloons over the goalie into the back of the net. Now you’re a goal down after not even one minute That’s the worst start possible in such a vital game,” FSV’s boss stated. “It’s unbelievable that something like that could happen. We just didn’t take enough care,” added centre back Jeremiah St. Juste.

Dominated the game but to no avail

But the shock didn’t move Mainz away from their philosophy. “It actually spurred the team on. They the got in the game and dominated Augsburg. The fought until the end, played some good football and created chances. They just didn’t get the rewards for their effort. We’ve had that a couple of time; played well but come away empty handed because we haven’t scored,” Beierlorzer said.

FSV’s head coach said that everyone is very disappointed, but that they need to put it behind them now, keep going and look ahead. “We need to continue to work hard. It was so important that we performed well, that our mentality remains intact, that the togetherness was there and that the players did their best,” said Beierlorzer. “The players gave it their all, and are naturally disappointed. That’s totally understandable. But it’s important not to lose sight of reality. That we have a three-point advantage plus a better goal difference, and that we still have three more chances. It’s in our hands, and we firmly believe that. We need to create our own luck.”