Home game against Gladbach without fans: Sporting director calls for aggression instead of nervousness to initiate the turnaround 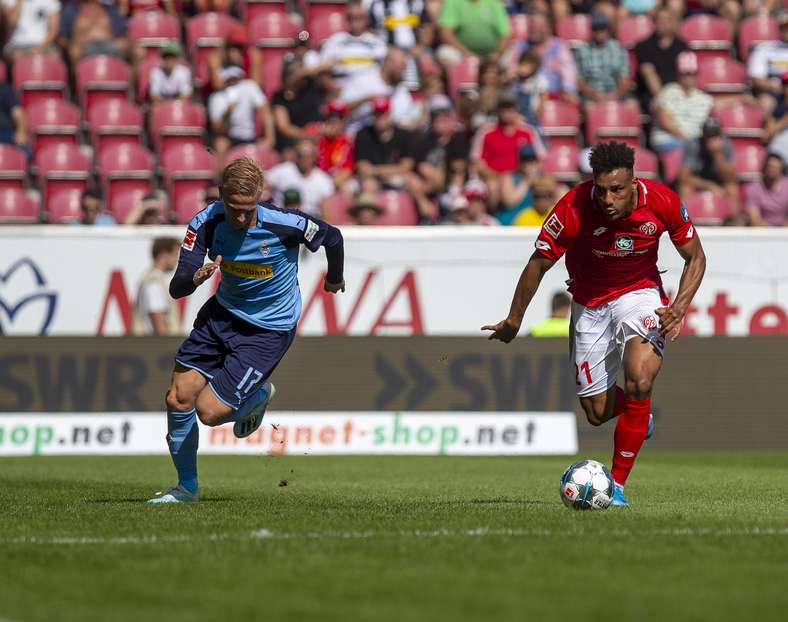 Two days before kick-off, it’s still questionable whether Karim Onisiwo will be fit.

The fact that Saturday’s opponent is once again one of the top teams in the league does not change the fact that everyone at Mainz 05 is determined to bring about an improvement to our position in the table. "Nobody enjoys the fact that we are in 18th place. It's clear that we want to earn points and win matches," said Rouven Schröder at the press conference before the home game against Borussia Mönchengladbach (Saturday, 3.30 p.m. CEST in the OPEL ARENA). Aggression instead of nervousness was the motto. "Gladbach presents a fresh opportunity for us to earn points."

Without spectators against Gladbach

The fact that the game has to be played without fans due to the latest development is very disappointing. "We always want as many fans as possible in the stadium. But none of us are experts and we have to rely on the authorities who we work with together in a spirit of trust. We have to take the current situation into account", said the Sporting Director. And Jan-Moritz Lichte added: "We regret the situation, but we must accept it as it is. That is why we must now bring the emotions that we lose from the fans being outside the stadium. That is our task".

Work and deliver is the direction the team is going in. Even if the opponent is a big one. Marco Rose, a former Mainz player, earned a 2-2 draw with his team against Inter Milan in the Champions League on Wednesday evening. "We have to see what information we can get out of the Milan game," said the Mainz coach, who with his staff has also seen and analysed the other Gladbach games in the Bundesliga. "We've gathered all the information and come up with a plan that we want to implement. Irrespective of the fact that we have seen Gladbach score a point with a top European team".

Which speaks for the great quality in Rose's team: "We have to counter this and show that we can stand up to this quality for 90 minutes and show our strengths", says the coach. Above all, there is room for improvement in the upcoming game. In training this week, the Mainz team continued to refine their defensive plan, but at the same time paid more attention to the attacking play. In last weekend's 1-0 defeat to Leverkusen, the hosts were unable to expand on promising situations in front of their opponents’ goal.

The excellent Leverkusen defence had made it very difficult to find space on the pitch, explained Lichte. "But when you see how many opportunities we had in the second half in particular to create good scoring chances from the wings, then more could have been achieved with better passing, better movement or better one-on-one situations.

Good quality of work and mentality

In training, the team has tried to improve these processes over the past few days. "Gladbach has a slightly different structure to their game. So we have to invest everything again and try to take the step that we didn't manage against Leverkusen. We need the awareness and confidence to want to have these situations and to be able to handle them.”

As far as personnel is concerned, Lichte can still draw on a full squad despite Jonny Burkardt and Karim Onisiwo having to take a break from training due to muscular problems. We'll have to wait and see how things develop before Saturday. "Otherwise the competition for places is definitely there. That is also the reason why everyone is giving 100 percent in training at the moment. The players are showing a good quality of work and mentality day after day," said the Mainz coach.

The team will be well prepared and highly motivated to go into this home game and try to turn the tide. "Play a good game, show our teeth. Turn the turf upside down," demanded Schröder. In terms of construction, the latter will happen anyway after the Gladbach game, because the rather damaged Arena turf has to be replaced. The home game against Schalke 04 (Saturday, 7 November) will then take place on a fresh pitch.