DEFENSIVE STABILITY IS THE FIRST STEP

The game at Hertha showed: Concept in working off the ball works 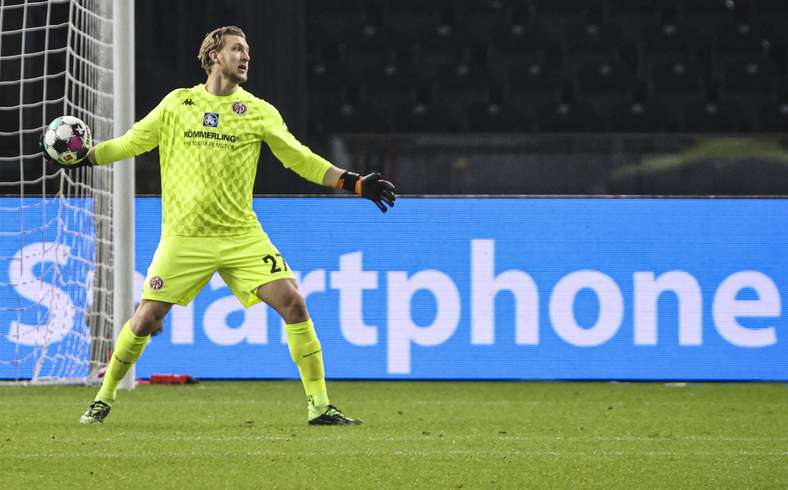 For the first time this season, Robin Zentner did not have to make a save and was very pleased with the players in front of him.

"In the end, a point is better than no point, but worse than three points," said Jan-Moritz Lichte at the press conference following Mainz's 0-0 draw with Hertha BSC. With his logical conclusion, the head coach summed up the feelings very well after his team's deserved draw at Berlin's Olympiastadion. The Rheinhessen side, whose defensive plan worked in full, were closer to victory than the hosts.

In retrospect, the overall positive impression that the team made during their away performance in the capital outweighed the negative. With compact, concentrated and always attentive defensive work, the Red and Whites never allowed the hosts renowned attack to get rolling. "We managed to work well off the ball for the 90 minutes and did not allow Hertha all the scoring chances," Lichte was very satisfied with the implementation of the defensive concept. The Zerofivers lined up against the attacking efforts with a five-man backline and the midfield line of Leo Barreiro, Kevin Stöger and Kunde Malong positioned in front. Mainz did not leave any gaps between the lines and were always on their toes in the direct battles: 56 per cent of tackles won were the numbers on the data sheet at the end. "The fighting is the benchmark," emphasised Mainz sporting director Rouven Schröder.

Defensive stability and even more opportunities

It was not only at the back that the score was level for the first time this season. Mainz had the most chances to score in a game that was generally lacking in chances, but the lack of effectiveness remained the shortcoming, as it had been in the previous games against Bielefeld and Cologne. Barreiro's first-half effort hit the crossbar and Stöger's second-half finish, which was just deflected for a corner, failed to land in the Berlin goal guarded by Alexander Schwolow. In the final action of the game, JP Mateta had the Berlin keeper beaten but he just missed. "Of course we are annoyed that we didn't take advantage of these situations and would have liked to have created a few more chances. But all in all, we are satisfied with our performance," said Lichte.

"We wanted to bring in defensive stability and we succeeded in this game," Karim Onisiwo, who this time formed the two-man attack with Robin Quaison, also confirmed the coach's assessment. "We wanted to create some chances up front. But it was important not to concede and take the point. It feels good." Goalkeeper Robin Zenter, who did not concede a goal for the first time since the away win at Borussia Dortmund in June, also took a good feeling with him from the capital. "That's nice, of course. I didn't have to intervene behind me or in any other big way. That's why I'm very happy with the players in front of me. That must also be the standard for us, to stand so compactly. But if we keep doing that, we'll score our goals again and win games."

That must also be the standard for us, to stand so compactly. But if we continue to do that, we will score our goals again and also win games.

Ideally, this coming Saturday against Werder Bremen will bring the first three points at the OPEL ARENA this season. The good defensive work, willingness to run and intensity against the ball must be carried over, he said. "This will definitely be a very competitive game. We have to give it our all," said Zentner.