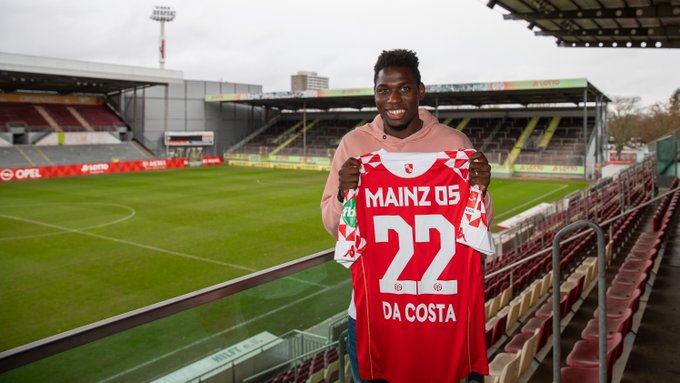 The new number 22 of the Zerofivers, Danny da Costa.

Following Dominik Kohr, Mainz 05 has secured the services of another player from Eintracht Frankfurt: Danny da Costa comes to the Bruchweg on loan until the end of the current season.

The 27-year-old defender has a lot of experience both domestically and in Europe. So far, the Neuss-born defender has made 187 appearances in the first and second Bundesliga as well as the DFB Cup, 30 games in the Europa League and two appearances in the Champions League. Da Costa has played seven competitive games for Eintracht this season.

"With Danny da Costa, we are gaining a robust fighter who can provide fresh impetus on the flank with his mentality and dynamism. With his defensive strengths and experience, he is an absolute asset for our team in the fight to stay in the league," says 05 sporting director Martin Schmidt.

17 chances to get out of the drop zone

Danny da Costa: "I'm looking forward to the opportunity to prove myself again in a new environment. I am aware that the situation is not that easy for Mainz 05, but I believe that I can do my part to turn the situation around together with my team-mates. We still have 17 games and therefore 17 chances to get out of the drop zone and to emerge stronger as a team from this relegation battle, and we want to make use of them."