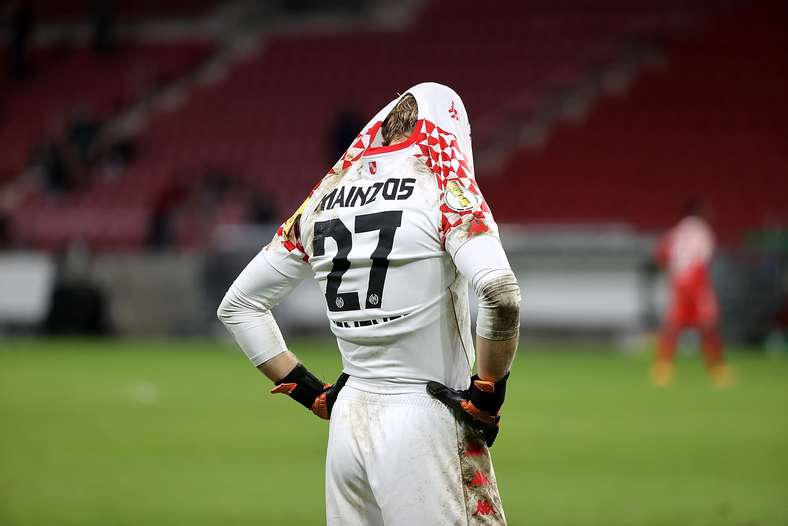 Mainz 05 were knocked out of the DFB Cup on penalties against second division side VfL Bochum on Wednesday evening. After goals from Jean-Paul Boëtius and Danny Latza, Mainz thought they were on the way to winning, but the visitors struck back through Gerrit Holtmann and Robert Tesche in the last minute of injury time. Because Mainz did not score in extra-time (red for VfL keeper Manuel Riemann) nor in the penalty shoot-out (three missed shots), the Bochum team celebrated after a long evening at the OPEL ARENA.

And things got off to a good start from Mainz's point of view: After an initial feeling-out period, the hosts struck with their first promising attack. Barreiro had won the ball in his own half and served Burkardt, who cleverly delayed and laid it into the path of Boëtius, whose classy finish from 14 metres was powerless against Manuel Riemann in the goal of the second division club (7'). However, the visitors played well in the OPEL ARENA, repeatedly threatening, but initially without being able to ignite any real scoring danger. Because Mainz was in a similar situation in an open, fast-paced game, there were no further major chances in the first half hour. And in a phase in which the visitors seemed to have more of the game, it was the Zerofivers who just missed scoring their second goal twice within a few minutes. Twice in the centre of attention: captain Latza, who was involved in the attacking play again and again this evening. Firstly, the 31-year-old failed to clear a cross from Robin Quaison due to Riemann's strong reaction save (36'). Two minutes later, Latza had the best chance of the evening when he put the ball over from ten metres after Onisiwo's return (38'). Mainz had survived VfL's brief period of pressure without any problems and pressed harder for a 2-0 lead shortly before the break. In the 42nd minute, Riemann had to make a save from a shot by right-back Jeremiah St. Juste, but was able to clear for a corner. Shortly after the break, a two-goal lead would not have been undeserved from Mainz's point of view due to the clearer opportunities.

Both teams came out of the changing rooms unchanged, and at first Mainz had to take a deep breath. After a corner-kick, Zentner misjudged and Armel Bella Kotchap had a free header at the far post, but it landed on the outside of the net (50'). The Zerofivers were unimpressed and added to their tally. Quaison ran onto a ball from deep and with the presence of mind passed the ball with his heel to Latza, who did not miss his third chance and made it 2-0 (55'). The decisive goal could have come against the never-say-die second division team after just over an hour when Alex Hack headed a Latza corner into the net (64'). It was particularly disappointing because the visitors were to reduce the score only a short time later. The Mainz defence were unable to clear a corner out of the danger zone, Danny Blum put the ball into the back area, where ex-Mainz player Holtmann, of all people, kept his cool and was able to cut the deficit after 66 minutes.

It was now a gripping cup battle in which the visitors pressed for the equaliser. Defensively, Mainz did well most of the time after the equaliser, but did not create enough chances. Silvere Ganvoula had a great chance to equalise in the 82nd minute, but his header, completely free, went wide of the goal. Otherwise, the defensive work of the hosts withstood the efforts of the second-division team until stoppage time. And when there was no sign of a goal, Bochum struck back once again. Robert Zulj sent the ball wide of the goal, where Tesche beat Hack and scored the not undeserved equaliser in literally the last second. So it was clear: extra-time would have to do the trick.

Mainz press but don't score - Can't score from the spot

Bochum had to play most of extra-time outnumbered after goalkeeper Riemann was sent off for a foul on Ji. But Mainz, who had been completely thrown off balance by the goal, struggled in extra-time and did not have any significant chances to score until the break. Bochum, on the other hand, now stood deep and waited for the all-important counter-attack or the penalty shoot-out. In the second 15 minutes of extra time, Ádám Szalai replaced Hack and celebrated his comeback in a Mainz shirt, after he had last been on the pitch in the first cup round against Havelse and had been suffering from a meniscus injury in recent weeks. And the Hungarian then had the next opportunity at his feet, when he shot from a cross from Boëtius, but the ball landed over the goal. With an extra man on the pitch, the Bundesliga team now clearly had more of the ball and could also have decided the game through Mateta, whose header from Kilian's cross went just wide of the right post (117'). The chances piled up, but Onisiwo also failed to put the ball into the box on the volley after Szalai's cross. It was to be the last chance, the match went into a penalty shoot-out, in which VfL had the better of it.

The Zerofivers failed to score any of their three penalties, while the visitors kept their cool three times and thus entered the DFB Cup round of 16.