Concentration is part of the job

Conceding a record number of goals - Niakhate: “It’s up to us to sort it out” 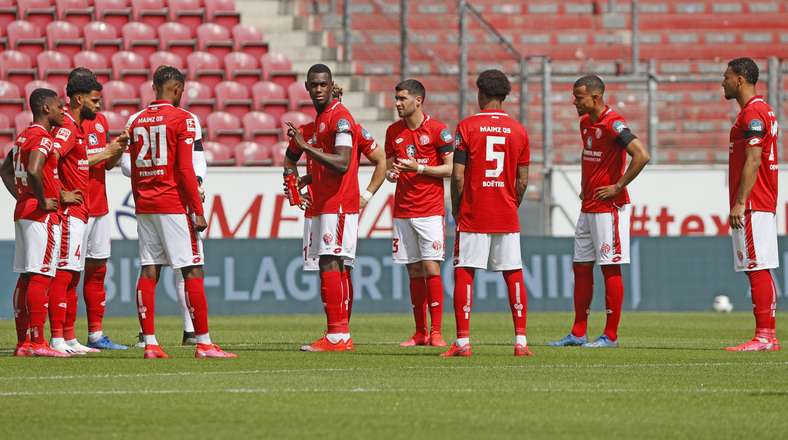 Captain Niakhate with his team before the Leipzig game: We have to pick up some points in Berlin.

Five goals conceded and another five chances missed, not the numbers that coaches find it east to deal with. "It hurt us. I didn't feel good," said Achim Beierlorzer on Monday afternoon in a video media conference. Losing 5-0 at home to RB Leipzig wasn’t exactly the ideal start for the Zerofivers heading into the second part of their double game week against FC Union Berlin on Wednesday.

Leipzig played as a real top team and in turn put in a great performance in the game, "we don't have to talk about that. Nevertheless, of course we wanted a lot more than we ultimately got on the pitch," said the 05 coach. Moussa Niakhaté added: "We didn’t manage to make the step up against a strong Leipzig team which is why the result was the way it was. We had some problems, a lot of things did not go well and we never really settled in the game."

The Frenchman, captain of the team in the first home game without fans and one of three central defenders in the Mainz back five, had problems with the Leipzig attacking department just like his teammates. The 24-year-old did not have an answer to why it got so bad. "If I knew the solution, I would be the first to try to implement it. We didn't manage to pick our heads up after we conceded. We have to learn from our mistakes very quickly."

The errors were thoroughly examined and processed in the video analysis the day after the game. "The individual mistakes, the tactical mistakes. We implemented these things a lot better in training than we did in the game, when in fact it should be the other way round. We definitely should have made it more intense, been aggressive, and tactically better. We discussed this with the team" Beierlorzer explained. "We thought players on the team could organise it. Either we were a bit overwhelmed because Leipzig put so much pressure on us, or we weren't focused enough." No matter how bad it looks we always try to defend to the very end, but we didn’t in this game. "And that is a little disappointing, because that's exactly what we worked on throughout the week. We trained really well and thought that we would be defensively sound. Unfortunately, that wasn't the case in the game."

Worked on a lot of things

The team have since been working through things defensively that will be important for their upcoming games. "How do you defend individually, how alert are you on set-pieces, how focused are you? These are aspects that of course we also urgently need on Wednesday," emphasised the coach, who then sent his players home with the assignment, "To have a real think. To think about whether you’ve properly prepared after the Leipzig. Of course a lot depends on the opponent, but we still have to do our job to the best of our ability- and that includes being fully concentrated.”

60 goals conceded, the most in the league, is proof that there sometimes seems to be a lack of exactly that - concentration. Never before in the Bundesliga has a Mainz team conceded more goals in 27 games. Even in the relegation season of 06/07 there were "only" 57 goals conceded - after 34 match days. "It is good to have the chance to get back so soon after and try and make up for it,” said Niakhaté. "It is up to us to do everything necessary to pick up the points we need. We still have to keep our opponents below us at bay until the end of the season, if that starts going well maybe we can even start looking upwards.”