Start of the training week: Head coach Jan-Moritz Lichte and his Mainz team analysed the defeat against Leverkusen, highlighting progress and identifying areas for improvement 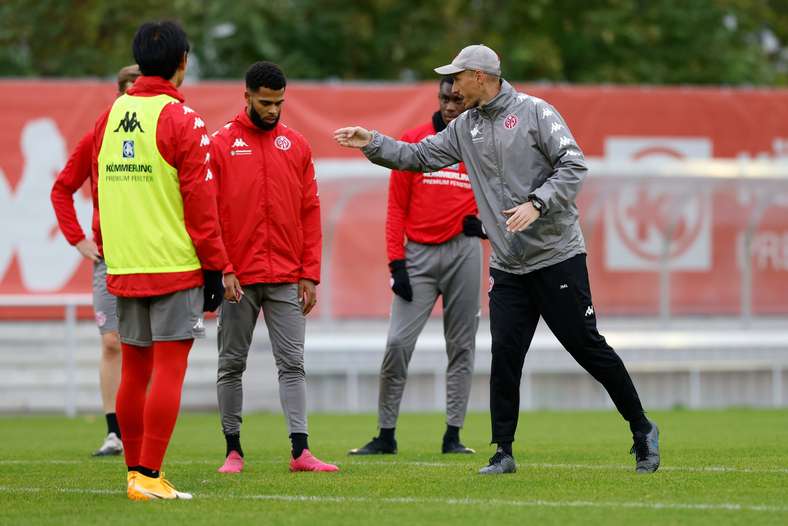 Clear instructions on the training ground: Against Mönchengladbach the Zerofivers want to earn points for the first time at the fifth attempt this season.

Also in the new training week the players are working hard to end the run of defeats in the Bundesliga. Jan-Moritz Lichte doesn't really want to think about whether the fact his opponents still have to play a tough Champions League match at Inter Milan on Wednesday evening can help. "It only becomes clear afterwards," said the head coach during his media duties on Tuesday afternoon.

Although the extensive analysis of the strengths and possible weaknesses of ex-Mainz player Marco Rose’s team are the subject of the preparations, Lichte believes that analysing previous Borussia games could be more meaningful than those from Milan, "because Borussia Mönchengladbach will perhaps approach Inter differently than the game against Mainz 05". And there is a lot to work on at Bruchweg until Saturday anyway.

I am allowed to do that

Four defeats in a row, zero points, bottom of the table. "I know that it would be nice if we were to earn points now," said the Mainz coach after the morning session and added "I try to influence what I can influence. That is the daily goal." And that began with a thorough analysis of the 0-1 defeat to Bayer Leverkusen. "We wanted more, and the opportunity to get more was there. That's why the disappointment is big and you feel frustrated for two days." Nevertheless, the video analysis has shown that the team implemented the defensive plan and didn’t give the opponents any big chances. "But we were also close going forward. The scenarios that we wanted to create were created. We definitely have to make more out of them."

This was the point of criticism from those fans with whom Lichte had emotional and loud discussions with on the sidelines after the final whistle. As an assistant coach, the coach who always appears reserved and calm, has become a head coach within a short period of time. He appears on the training pitch with clear and loud instructions, works with his players on the basics, develops clear tactics and principles, but also shows his emotions and puts himself in front of his team. "I had the feeling that this is where I wanted to speak and say something about it," Lichte explained the scene. "Just as fans tell us what they think and are allowed to do so, I felt I was allowed to do so at this time. I stand for being allowed to argue sometimes. You don't always have to be of the same opinion, but you can accept the opinion of the other person.

The topic of the dispute was then on the agenda in the first training session anyway. "We were mainly concerned with making better use of situations on the wing than we did at the weekend," says the coach. In the analysis it became clear that there had been good initial passages of play on the wing. "We were also one step further than against Union, we sometimes had players free but couldn’t manage to find them in the middle. It was either because of the final pass, the cross or the movement of the players in the box. We still haven't managed to score one goal after the other in training today," explained Lichte. "But the boys are fully engaged, they’re giving everything they can to make it happen, you can see that. But they are too hectic at the moment in these situations. They want it too much and then they lack a little bit of calmness, self-awareness, and trust in the process. We have to work on that, because it won't get us anywhere if we make mistakes from being too hectic.

Now there is another attempt to score points against Gladbach. "We're looking closely at who we think can do what we did against Leverkusen: Maximum willingness to run, energy and other important attributes," said Lichte, who currently has 27 healthy outfield players at his disposal and will have to put a number of them back in the stands on Saturday. "Of course many people will be disappointed. They have to live with it. We have a time when everyone has to put their ego aside and accept that decisions have to be made," said the coach. He does not see a problem in this. "It's only a problem if the players make it a problem. Then we have to talk about it."