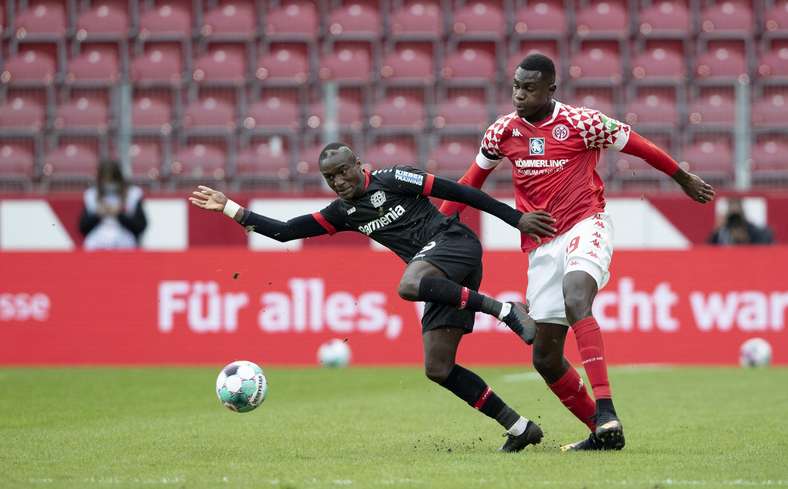 Moussa Niakhaté versus Moussa Diaby: In the first leg, the latter had the upper hand in a 1-0 win for Bayer, and on Carnival Saturday, the Zerofivers want to score in Leverkusen.

An alienating fifth season draws to a close amid the Corona pandemic. A time of sacrifices and longing. For a return to normality as soon as possible, for a carefree time and a return to traditional Rhine-Hessian festivities. The Mainz heart bleeds in the face of the necessary renunciation. And so, according to Bo Svensson, the Zerofivers want to do their best on Carnival Saturday and, for their part, make a contribution to nevertheless ensuring, at least temporarily, happy Mainzers on this not at all normal Carnival weekend.

The Schillerplatz in the heart of the city, usually the meeting place for thousands of clowns and jesters, was as empty as the Bundesliga stadiums at 11.11am this Thursday. Less than two hours later, head coach Bo Svensson called the press conference in the OPEL ARENA before the clash with Bayer 04 Leverkusen, in which he made clear that his and his team's focus was naturally exclusively on the sporting challenge, but at the same time emphasised that the current situation was painful: "For Mainz as a city and our region, it hurts to do without Carnival. Normally, everyone is looking forward to the coming days. Unfortunately, we have to do without it and perhaps we will be able to celebrate it all the more next year. Times are hard for everyone, and I hope that with football we can help people still have some joy at home this weekend." To create the conditions for that - that much is certain - the 05 team needs another of its better days at the current fifth-placed team in the table. "Leverkusen have high individual quality in all parts of the team," the coach knows. "An extremely difficult task awaits us. For that, we will choose an approach that we believe can cause Leverkusen problems."

...otherwise you will be punished

And the 41-year-old ex-player believes his team has a chance, having started a good training week so far with a noticeable "boost" after the victory over Union Berlin: "We know that we have quality and have recently shown that we can cause problems for teams in the Bundesliga. We'll try to do that in Leverkusen, too, and we know that we'll certainly have to do more things right there than against some other opponents. There won't be many chances, so we have to take them. All aspects of the game have to fit together. Above all, we must not give them any time in dangerous areas in attack, we must work them over 90 minutes, otherwise you will be punished," warns the 05 coach, who will still have to do without Robin Quaison (knee contusion), but can also draw from a big squad and keep all options open.

The Dane did not want to give any insights into his tactical considerations after the 5-2-3 or 5-3-2 arrangement had recently established itself on the field. There are two facets that you have to look at as a coach: 'What are the constants that you always want to see and pragmatically: What suits the match day best'," he said, formulating two questions that he and his coaching team ask themselves week after week.

The feeling must not vary

"You always have to include these two components. It can vary from week to week. What must not vary is the feeling or the expression. That means when people watch our game, they have to see that there is a team on the pitch that exudes passion and is ready to give everything for each other. We want an intense style of play. System and type of players can vary depending on what helps us the most." As he knows, that never applies to the rest.

And so the Zerofivers, for whom the recent onset of winter, unlike some of their competitors, did not cause any problems in preparing for the game ("except that we had to put on long johns"), want to continue the trend of the past few weeks, in which seven points from six games were achieved with Svensson on the sidelines. Incidentally, the last time the Zerofivers met Bayer 04 on a Carnival Saturday was almost exactly four years ago at the BayArena, where they won 2-0 (Bell & Öztunali scored). A good omen? It remains to be seen. At best, according to the goal, Mainz will succeed in offering itself to its supporters as a tailor-made means of compensation in two respects on this dreary Carnival weekend in 2021: Firstly, with a passionate performance on Saturday afternoon in Leverkusen, before the digital Mainz stadium session (live on 05ER.tv) on Sunday evening could be the icing on the cake in terms of carnival compensation.