After six years with the clubs, Brosinski's current contract is coming to an end. Read on to find out what the fullback had to say about that, the Bundesliga Home Challenge and more... 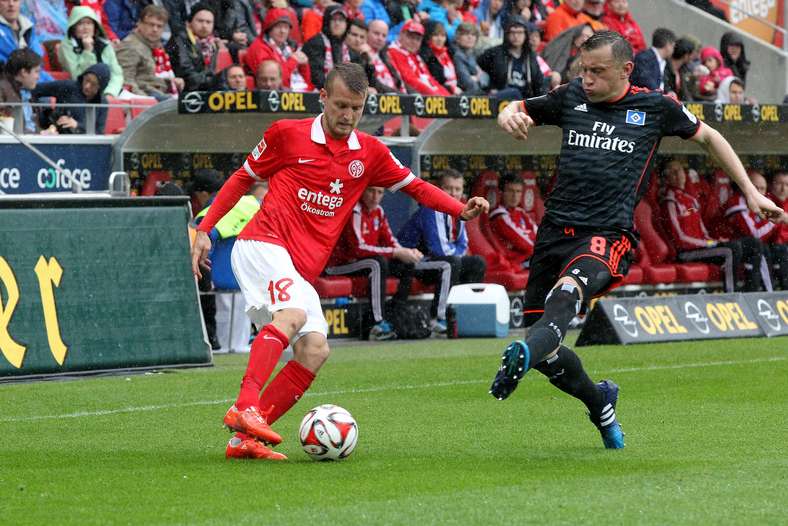 Brosinski made 32 appearances in his first season with the Zerofivers.

Not many pros celebrate their Bundesliga debut at the age of 31, but it can happen. As a new competition, the Bundesliga Home Challenge presents just such an opportunity. On matchday 1, Daniel Brosinski took part on behalf of FSV. However, in spite of the welcome change of pace, the defensive dynamo longs to return to full training; an opportunity to put himself on display would not go amiss.

Brosinski put on a good show in competitive game of FIFA 20 with Borussia Dortmund’s Achraf Hakimi on Saturday afternoon. Twice the Zerofiver fought back, equalising late on through Davante Parker’s virtual self to make it 2-2. Yet the 31-year-old was not completely happy with the draw. “I played the better football, Hacki told me so afterwards as well,” he said after the match.

“But playing online with people watching was a totally new experience, I was a bit nervous, because I was representing Mainz 05 and on camera too. It got to me, you could see that in the first half. So I wasn’t really happy with it. He said that when he starts to play something new, he wants to do so with maximum success, “even if it’s just about the prestige on the console. I have a lot of ambition.” Of course there are more important things than eSports for Brosinski while he is working from home.

Above all, he says he’s missing working with his teammates day by day, and that WhatsApp groups and singular exchanges with individuals just isn’t the same. “We’re all going for runs alone, doing our fitness regimes, all without being able to have a chat in between. I can motivate myself pretty well, but home that we can get back to some form of team training soon.” Restarting and completing the season is clearly the goal of the DFL, and the possibility of which will be discussed at length in the coming weeks.

For Brosinski, the return of the Bundesliga is desirable for two reasons. Firstly, the singular desire to, as for every professional sportsman, turn his hobby into his job. On the other hand, his contract with the club runs out on 30 June. Foreseen discussions with sporting director Rouven Schröder have been put on hold for the moment, and Brosinski, who has made 184 competitive appearances for the club since 2014, understands that this has been necessary in light of recent events. “Of course, it’s not a nice feeling. I’m not able to look ahead to next season and it’s all a bit uncertain. It’s still unthinkable that there could be no more football this year. You think about various different scenarios in this regard.”

And these scenarios are as follows. “The worst case is that it’s the end of my professional footballing career. But I’m thinking about more positive outcomes and am convinced we’ll be playing again soon. Of course I’m in contact with the club, but at a time like this, the club comes first, which is completely understandable. It’ll be time to talk when things get better again.”

Until then, Brosinski is using his time to reflect. “At this moment in time, the most important thing is that we’re all healthy, and hopefully stay that way. That comes first,” the defensive all-rounder said. He understands that it does a lot of people good to occupy themselves with other things. “But you shouldn’t be too critical either, and have to make the best out of the situation. You get the sense that everyone is prepared to make do without certain things, to help where they can. It’s nice to see this kind of solidarity in Germany and Europe, so I’m hopeful that we’ll get through all this. Personally, I’m putting football to one side for a moment, and focusing on the little things. At the end of the day, I can say that I’m happy with the way my life and career have gone until now. Other people definitely have bigger problems than I do right now.”

The fact that his career could be played out in front of empty stands for the foreseeable future, is, according to Brosinski, a necessary evil. “Of course, there won’t be as much emotion involved. It’ll be strange to be able to hear every word from the coaches and players. So we’ll need to push ourselves even harder. It’ll be a completely different game and experience. Something we’ll have to accept. But the positive will be getting back to matches. Even an outward signal. Maybe there will be the possibility to create a framework for simulating atmosphere. I’d be really open to that.” More than 10 years after his Bundesliga debut with FC Köln, Brosinski could have the chance to break 200 appearances in Germany’s top tier. He only needs 16 more.