"Bring that same team spirit to the pitch against Augsburg"

The 2-0 derby win improved the situation and increased optimism. Beierlorzer: “We need to keep taking these steps.” 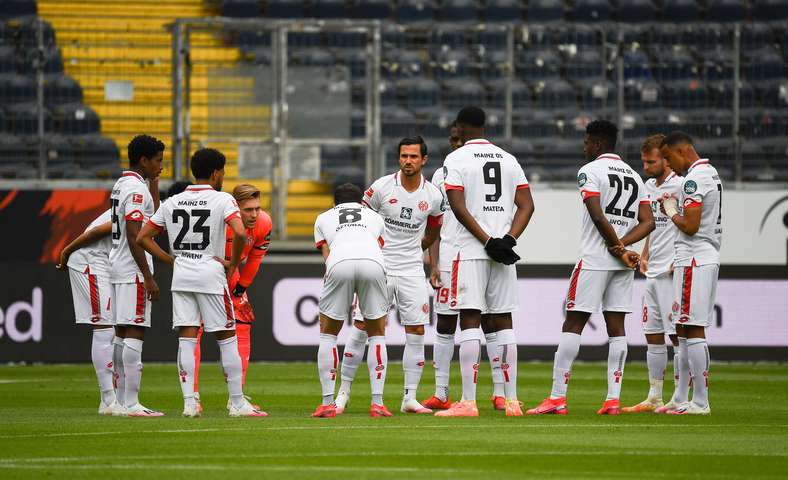 Captain Danny Latza "felt that something was possible" before the kick-off in Frankfurt.

Mainz 05 showed their intent to escape the relegation battle last week, with a 2-0 derby win over Eintracht Frankfurt, extending their lead over the relegation play-off place to three points and the relegation places to six points. “We need to bring that same team spirit to the pitch again against Augsburg. With this concentration, with this type of concentrated, focused style of play,” said Achim Beierlorzer

The Mainz head coach spoke after Mainz’ unexpectedly confident third successive win against Frankfurt in the prestigious Rhein-Main Derby, at an important part of the season. Now the game against Augsburg on Sunday approaches, at Mainz’ OPEL ARENA (15:30 CEST). The first of four matches in an exciting run-in to the end of the season comes against an Augsburg side who are just one point above the Zerofivers. Also in the final four are Bundesliga high-fliers Borussia Dortmund and Bayer Leverkusen, as well as Werder Bremen who are in the relegation zone.

In Frankfurt the Mainz players were icons of courage and optimism in a difficult environment, and proved to their doubters that the team was capable of asserting itself in the tough fight against relegation. Beierlorzer couldn’t hear the team „focussing“ as such, „But it is an extremely important term. Our performances against Union Berlin and Hoffenheim already gave us reasons to believe, and not to give up and believe we’re losing this race. We built on those reasons. It was important to us that we play at a high intensity in Frankfurt. We didn’t try any underhanded tactics, we just worked hard on the important things. Of course, it’s about letting these old mantras – focus on yourself, believe in your own strengths, work for the team, give it your all – take hold. The team knew it was up to them.”

But we’ve taken a big step, that we needed to take in preparation for the final matches of the season. What the team needs to do is keep taking these steps”

And the team delivered, at the right time, with the required seriousness. “It’s clear to everyone that nothing has happened yet. But we’ve taken a big step, that we needed to take in preparation for the final matches of the season. What the team needs to do is keep taking these steps,” explained the Zerofivers head coach.

A certain level of consistency

The game against Augsburg in the home stadium is of course incredibly important. Three more points would represent a significant improvement for Mainz’ situation, and let the squad relax a little. The task would not be too dissimilar from what the team needed to do against Frankfurt, Beierlorzer suspects. Augsburg will start high, show a lot of aggression, and look for chances. “We will have to see whether or not it will be a completely different task, or whether it will be about being ready to run, tackling hard, and above all, defensive stability. We will analyse what to do on Sunday,“ said the coach. On Tuesday, at Bruchweg, preparations began for the penultimate home game of the season.

“We will have to see whether or not it will be a completely different task, or whether it will be about being ready to run, tackling hard, and above all, defensive stability.”

In Frankfurt, Mainz impressed with a high work rate and a better tackle rate than their opponents. “It was a challenge to win this match in Frankfurt,” said Beierlorzer. But it has been shown already that this is the minimum amount of effort the team can bring to the match. Rouven Schröder pointed out after the final whistle that the sporting director expected a certain level of consistency in the team, and that the sharpness level the team displayed in the derby must be displayed in every game until the end of the season.