BOTTOM OF THE TABLE CLASH ENDS IN A DRAW

Zerofiver's score twice from the penalty spot, but still without a win: Matata put Mainz in the lead before St. Juste's own goal 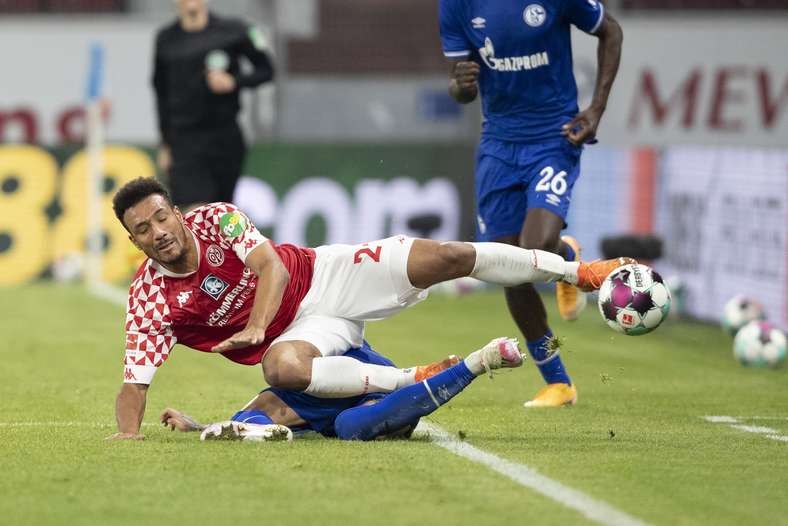 Two penalties, a Schalke goal disallowed and a Mainz own goal resulted in a 2-2 draw: The bottom of the table clash between Mainz and Schalke on Saturday afternoon in the OPEL ARENA had a lot to offer. However, the Mainz team who led twice from penalties by Daniel Brosinski and Jean-Philippe Mateta had several good chances to extend their lead, couldn't get the win. For Schalke, Mark Uth scored a free-kick, and then the equaliser came from a Jeremiah St. Juste own goal.

Jan-Moritz Lichte had made three changes from the defeat to Augsburg, selecting Leandro Barreiro, Edimilson Fernandes and Jonathan Burkardt ahead of Kunde Malong, Robin Quaison and Levin Öztunali, who were on the bench.

It started well for the Zerofiver's, because the first venture into the opposing penalty area in the fifth minute was immediately rewarded with a penalty for the hosts: Matija Nastasic clumsily tackled Burkardt and referee Patrick Ittrich decided on a penalty kick after using the video replay. Daniel Brosinski remained as cool as ever and converted to give Mainz an early 1-0 lead (6 mins). But Schalke proved to be an uncomfortable opponent and created chances in the early stages. At first Robin Zentner parried a shot from Uth out of the area after a corner (15 mins), but two minutes later St. Juste made an important block from Bastian Ozcipka - the shot would probably have been heading towards goal. In minute 22, a comic interlude in front of the Mainz box: Goncalo Paciencia had escaped Luca Kilian, who had slipped, and squared to Uth, who couldn't connect with the ball and therefore couldn't convert. On the other side, Frederik Rönnow parried a 20-metre shot from Fernandes after Jean-Philippe Mateta had knocked it down.

After just under half an hour, with the Zerofiver's changing from the usual 4-2-3-1 to 5-3-2, the Frenchman tried from a sharp angle, but Rönnow was again in place. At a time when FSV were beginning to look solid in defence, captain Danny Latza then fouled Paciencia on the edge of the penalty area. The following free-kick by Uth was converted over the wall to equalise (36 mins). It looked like it would be a draw at half-time until Burkardt played in Mateta in space, who was then fouled by Salif Sané - another penalty (45 mins)! This time Mateta took the responsibility from the spot and beat the goalkeeper to take the lead again. The goal scorer could have added another shortly afterwards but this time couldn't beat Rönnow from six metres (45+5 mins).

Kabak's goal is disallowed, St. Juste scores an own goal

With a narrow lead Öztunali replaced Brosinski, then the second-half started with a Schalke goal that was overruled after a VAR review. After a corner-kick Ozan Kabak celebrated, but before that he had controlled the ball with his hand (50 mins). Burkardt could have brought the Mainz team closer to victory seven minutes later, after a fine pass from Boëtius, the home-grown player headed towards Rönnow, who was able to save again (57 mins). The game was now open and the next opportunity belonged to the Royal Blues: Paciencia placed his shot from an acute angle but Zentner did not need to intervene (65 mins). From almost the same position, he tried to score five minutes later - also over (70 mins). The FSV was waiting for the counterattack, which could have sealed the game in this phase, but Schalke did not yet throw all their eggs into one basket and naturally wanted to prevent the knockout blow. The game in this second-half was by no means top class, but it was very exciting because the narrow Mainz lead heading into the final phase was only one goal. The will to overturn the run of defeats on this Saturday afternoon was evident to all in red and white.

The Rheinhessen then had a counterattack in the 78th minute when Boëtius marched through midfield and played in Mateta perfectly, but he missed the goal. A frustrating moment, especially since the visitors were more or less handed the equaliser four minutes later. A cross from Steven Skrzybski could not be cleared by Zentner, the ball then hit the shin of St. Juste and spun across the line to make it 2-2 (82 mins). Lichte reacted to this setback and brought on Quaison for Boëtius for the final few minutes. However, there was not much action in either penalty area after that, Uth's shot in injury-time was more for fans of statistics. The draw gave the Zerofiver's the first point of the season on the seventh matchday, but like the Royal Blues, they are still waiting for their first three points of the season. Following the international break, the FSV will face SC Freiburg and Florian Muller.