The Zerofivers created a string of clear-cut chances against the second-division team and looked especially dangerous in the last third of the 120 minute friendly match. 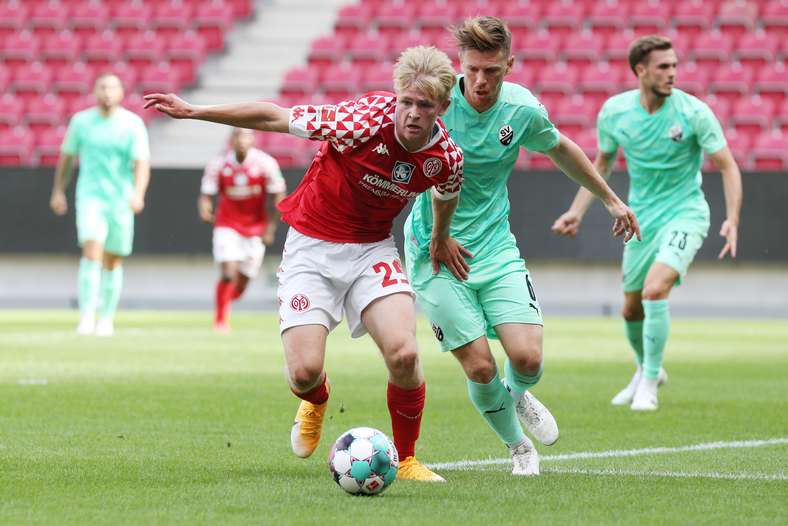 After Mainz’s preseason friendly against VfB Stuttgart was called off, two negative coronavirus tests for the rest of the squad and coaching staff meant that this Saturday’s return to the OPEL ARENA went ahead as planned. The Zerofivers fell behind in their friendly match against SV Sandhausen, with Daniel Keita-Ruel scoring from the spot to give our visitors a 1-0 advantage. In front of 200 spectators, Mainz created chance after chance but were unable to take their opportunities.

Mainz put on a show of clinical finishing as they hammered Würzburg last week, firing three goals inside 30 minutes en route to a 6-0 victory. Yet things were a little more complicated during this week’s 120-minute preseason match. Against a Sandhausen side who remained compact, the best chances of the opening 30-minute quarter fell to Karim Onisiwo. First, the Austrian lost control of the ball in a promising position following a backheel from Levin Öztunali (10’), before firing wide 20 minutes later (30’). The Sandhausen players were quick to capitalise on Mainz’s mistakes, as they created a few chances resulting directly from turnovers, but failed to forge any clear-cut opportunities. FSV fashioned the first chance following the drinks break, as an Onisiwo cross found Mateta in the middle. Mateta’s header was gathered comfortably by the SVS keeper Martin Fraisl though. Our guests’ first real chance came just a minute later, with Baku forced to deflect a shot from Nicolas Nartey over the bar (33’). After the misfiring Onisiwo had another chance saved well by Fraisl, referee Timo Gerach gave the visitors a penalty after spotting a handball by Jeremiah St. Juste. The Dutchman had no chance to react after the ball was shot against his hand from point-blank range. The resulting spot-kick was slotted into the bottom-left corner by Keita-Ruel, giving substitute goalkeeper Flo Müller no chance (42’).

Wasteful in front of goal

There was then very little action of note for either side until the 80th minute. First Phillipp Mwene curled the ball against the bar, before Sandhausen’s new goalkeeper Rick Wulle reacted well to get to the rebound ahead of Marlon Mustapha. The Zerofivers were determined to make things happen and kept pushing forward. Abass Issah did some impressive work out on the right wing as he drove to the byline, but he could only hit the side netting after missing the right moment to square the ball across the opposition box (85’). At the other end of the pitch, Sandhausen fashioned themselves an opening in the 92nd minute, but Philipp Klingmann’s volley flew over the bar.

The chances began to arrive more regularly now; Mainz 05 academy product Merveille Papela didn’t make clean contact with the ball and saw his shot sail wide after some outstanding work from Kunde (95’), before Mario Engels soon found himself free for the opposition with only Finn Dahmen to beat, but the FSV keeper managed to pull off a finger-tip save to prevent further damage (96’). Barely a minute later, Issah let fly but Wulle reacted well to raise a hand and tip the ball out for a corner (97’).

The best chance to net a well-deserved equaliser fell to Ádám Szalai as the game entered its final 15 minutes. Niklas Tauer put a glorious ball into the box, but the Hungarian striker put the ball inches wide of the post (106’). Jonny Burkardt, recently called up to the Germany U21 squad for the first time, should also have had an equaliser soon after. Issah sent the 20-year-old in behind with an unbelievable through ball from his own half, but Burkardt was unable to finish the move off after sprinting 50 metres towards goal (109’). With Szalai missing another chance six minutes from time, and Engels hitting the woodwork at the other end, the score remained unchanged at the final whistle. The Zerofivers were made to rue their missed opportunities, especially all those that came late in the game, and fell to an avoidable 1-0 loss.