Bell: "At the moment, everything is on hold."

The home-grown Zerofiver speaks about working from home, his dramatic last year and possible games behind closed doors 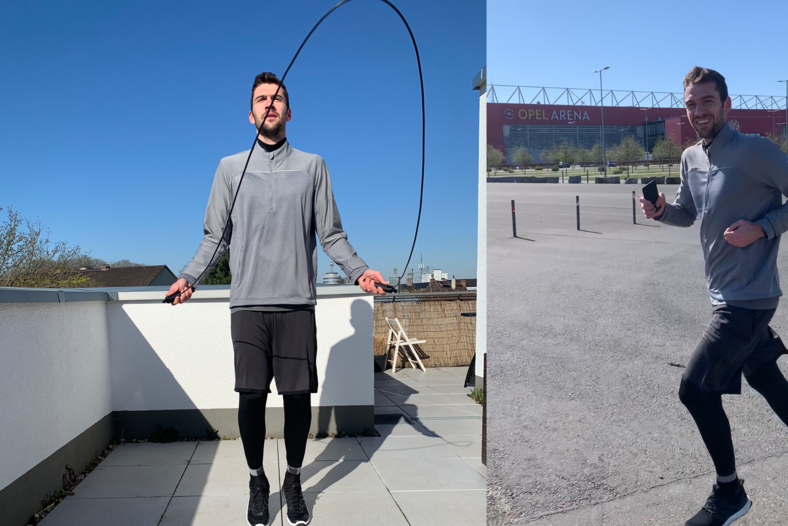 Stefan Bell finally managed to return to team training with his colleagues two weeks ago, since injuring his ankle in Mainz 05’s DFB-Pokal game against 1. FC Kaiserslautern in August. His long-awaited return to regular first-team action was soon to come, but postponed indefinitely due to the ongoing Coronavirus crisis. Despite this, the 28-year-old has since completed an individual training program and is waiting patiently to make his return.

In an interview with mainz05.de, he spoke about how he is dealing with the situation, about his contract ending in the summer and other reports, as well as what the lack of ongoing football at the moment could mean to an amateur football club such as FV Vilja Wehr.

Stefan, how are you? What is your take on the situation at the moment?

Bell: I was just about to start regularly training with the team again before the outbreak, so physically I’m very well. For me personally, it’s of course unlucky, seeing as I’ve been preparing for this moment for the last seven months, but am now in isolation working from home. But maybe this just gives me more time to catch up in terms of overall endurance. I can’t change what we’re all going through now, anyway.

What is the average daily routine looking like at the moment?

Bell: We got a plan from our athletic coaches so we can try and simulate our normal training routine as best as we can. That means we train six days a week in both overall physical training and also running. I usually use the morning for training and spend the rest of the day like everyone else does. Things like working on the terrace, working on some other things that have been left, or sometimes just doing nothing

This can’t be neglected.

The measures imposed on the public have recently not been fully followed. How hard is it to spend all the time at home?

Bell: Firstly, I think it is important that we are still allowed to go outside by ourselves or in pairs. At the end of the day, fresh air and exercise are very important for the mind. As for the couple of violations of this rule, I think there are lots of reports that a small part are not complying. But in my view it is much more important that the vast majority continue to follow the guidelines. This can’t be neglected.

A year ago, you lost your starting position, managed to fight to get it back in the summer, then suffered a serious injury. Having returned to training two weeks ago, this has been an eventful year for you…

Bell: These twelve months have had as much drama in them as the last seven or eight years in my career. The injury left me feeling very bad, and the realisation was very strange. I was out for a long time, but the patience paid off because I now have a really good feeling in my ankle,  and can make all my movements without any problems. Now I’m forced to wait a bit longer, but I can’t change that.

What was the atmosphere like last Tuesday, when you said goodbye to Bruchweg and the rest of the team for an undefined amount of time?

Bell: It was a strange situation. You are sent home, indefinitely, with a fitness schedule. It is completely different to the summer holidays, when you are sent off with a goal for a specific window of time. You know what you’re training for. Now, we’re in some kind of standby mode. We learn week by week how to proceed, which of course is a whole new experience.

Many people, industries and companies are currently suffering as a result oft he pandemic. You have been supporting your home club FV Vilja Wehr for many years: what does a crisis like this mean for an amateur football club?

Bell: All training and matches were stopped at Wehr, but we naturally still have expenses. We lose a lot in revenue as well. For example, we’d planned to have an easter camp – including a home game at the OPEL ARENA – which we have now had to postpone until the summer holidays. Apart from that we were planning to go hiking for a day in May and a fun fair in the summer. The income from these two festivals makes up around 30 percent of our annual income. Another big point is advertising and sponsors. The bills for the advertising go out in April. Many small and medium-sized companies are having big problems right now and are facing huge challenges to overcome.

But that’s not just me.

Your contract expires in the summer. What does the situation mean to you?

Bell: I think both me and the club would have liked to sort this out. But that’s not just me, many other players are about to expire or need extending. At the moment everything is on hold. I’m sure that this also applies to a lot of transfers, because no one is planning security and there is uncertainty about budgets. No one knows how it’s going to go, so it will definitely be an interesting summer. I have to accept the situation and wait, as everyone has to do at the moment.

Are you personally worried?

Bell: No, at the moment we are experiencing something completely new and unknown. Fortunately we have experts  who will hopefully make the right decisions and guide us through this crisis. We have to follow those. I think it’s important that you’re allowed out of the house. In my view, it would only be bad if you were ‘locked in’ for a very long time.

If we are to play again, it looks likely that it will be behind closed doors. Could you imagine that these games will happen while remaining competitive?

Bell: It would naturally be a new experience for everyone involved. But I would like to say it like this. A few weeks ago the games behind closed doors were very negative, and of course we want to play in front of our fans. Now I think you could say that a lot of people would be happy if there were games without spectators present. From a player’s point of view, I can imagine it would be possible to adapt to, even though it would never be the same as it had been before. Tactically, it would be better because you can understand everyone better on the pitch. There’s a permanent background noise normally from the stands when you’re on the pitch. Games without spectators could be a lot more tactical and variable.

...at some point all of this goes without saying.

Have you learnt to appreciate the normality that we have lost in these recent weeks?

Bell: I can compare the current situation to my injury. If as a player, like me, you are never seriously injured, then at some point all of this goes without saying. I’m much more aware now of how nice it is to complete my sessions without any problems. I think the situation is very similar now with the greater amount of isolation in society at the moment.