Mainz head to Frankfurt for a must-win Derby game on Satruday - Beierlorzer: "our next chance to pick up three points." 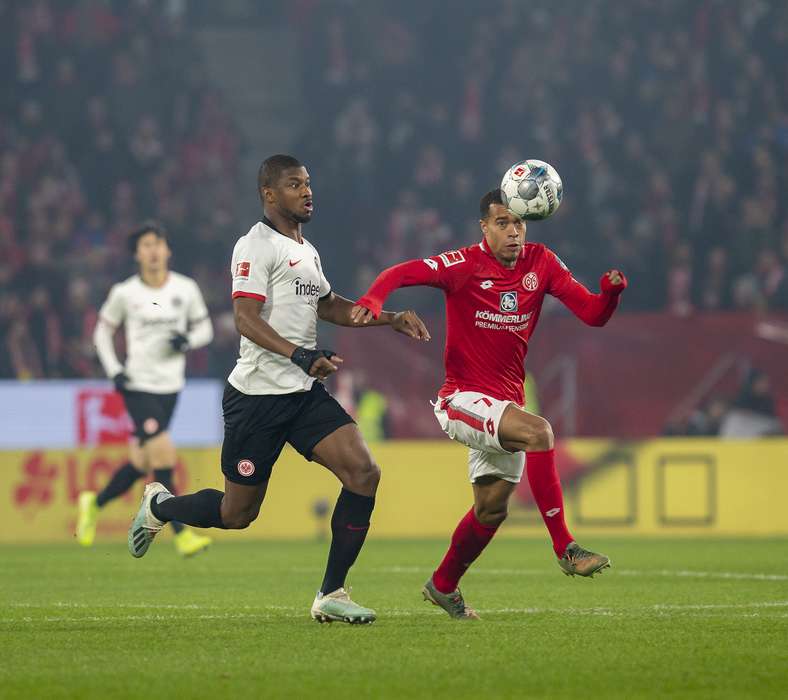 Quaison overturned a first-half deficit against Eintracht earlier in the season.

With a comfortable 3-0 win over second-to-last placed Werder, Eintracht Frankfurt look to have achieved safety in the Bundesliga. Whether that’ll make Mainz’s job easier on Saturday, is still up for debate. “It’s only an advantage if we can use it,” Achim Beierlorzer said in his press conference two days ahead of the game.

“We’ll see what we can get there. The deciding factor is that we bring the required energy out onto the pitch and reward ourselves with determination,” explained the Zerofivers’ head coach. There was a distinct lack of determination in Mainz’s most recent outing. A 1-0 loss at home to TSG Hoffenheim means that the Zerofivers have won a single game since the Bundesliga restarted.

“Not getting the rewards for performances and engagement is part and parcel of the game. We discussed that game and saw that we need to be more determined if we want to score. We’re going over detailed video analysis and tactics with the team, and I think the team is very focused and are concentrating well. They’re taking in what I say, are switched-on in training. They’re all taking their job very seriously,” Beierlorzer said.

The team needs to present a united front in Frankfurt and back themselves to create the necessary chances. In order to raise spirits in the camp, the players headed to the OPEL ARENA to watch Werder Bremen vs. Frankfurt as a group. A helpful exercise in more ways than just one, given that Mainz still have both teams left to play in the Bundesliga. Werder Bremen come to the OPEL ARENA for matchday 33. “It was just as we had imagined it,” said sporting director Rouven Schröder. “The good thing was that nobody had their mobile in them, they were all focused on the game. The players paid attention, mulled it over and noticed the high intensity. In all, it was a very successful evening and good prep for Saturday.”

“Energy and sharpness to fight with everything we have, belief, the ambition to chuck everything at it, even if it’s not going well. That is what we need, then you get rewarded. I am firmly convinced of this,” Schröder said. “We’re calling on the team to maintain focus and see the chance to end this season on a high. Keep a clear head, don’t be distracted, show your inner strength: that’s an important point. We can only do this as a group.” The 44-year-old will watch the Derby from the bench, rather than in the stands. He explained that it’s not about sending a message. “I want to be closer to the team and the coach again and support them. I just want to be present.”

A question of balance

The game in Frankfurt will be a tough challenge for FSV. Beierlorzer is certain of this, because Eintracht are strong in the challenge, counter quickly and with precision, are coming off the back of a big win in Bremen and are strong over the dead ball. “It’s a question of balance,” said Mainz’s head coach. “We need to attack with courage, because you can’t win if you don’t score. We also need to defend well without the ball.” But there will certainly be opportunity aplenty against Frankfurt. “They normally play with three at the backs, while their wingbacks push high. If our double-pivot can turn over possession, there is a chance to break. We need to put all of our energy into this game, then we’ll have a chance. And when we attack their penalty area, we have got to convert. Hopefully resulting in a kick-off for them.”

Mainz have both of the last two Derby meetings, and FSV’s head coach is hopeful that his side can take positives from those victories “to strengthen our belief that we can do it, and then convert those words into actions. It’s our next chance to pick up three points, and we need them.”