Beierlozer: “We have to be ready for the fight”

The head coach demands a much better performance from his team ahead of the game in Berlin – Schröder: Make things positive again 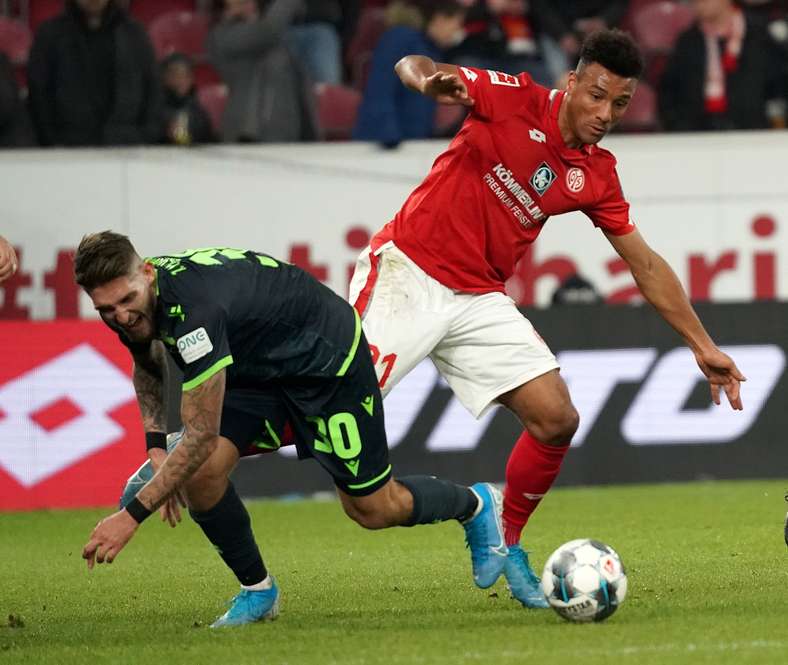 Karim Onisiwo's late goal was merely a consolation in the return fixture earlier this season.

The one advantage of a double game week is that it gives the team the opportunity to quickly make amends for the 5-0 loss against RB Leipzig at the weekend. 1. FSV Mainz face a difficult trip to the capital on Wednesday evening to take on Union Berlin (20:30 CEST). “Nevertheless, it has to be our aim to win this game. We want to level ourselves with Union on 30 points. That’s our target,” said Rouven Schröder in the pre-match press conference.

The capital city club currently sit in 13th place in the Bundesliga table on 30 points. “It’s not up for debate that we’re a similar level to them. It’s a game between two teams with much different philosophies, but similar targets and who are both fighting towards this,” explained the coach. “The team were all disappointed with each other after the defeat on Sunday. They all took it very seriously and are aware of the situation. We have a very difficult game ahead of us, but also a great chance to catch up with Union. I’m convinced that the players who line up on the pitch in Berlin will give everything to achieve this goal.”

Direct with strength out wide

Achim Beierlozer made it clear that the defeat against Leipzig had been sufficiently addressed and they had clearly identified where the team went wrong. Now it’s important to focus on the next opponent, who have a much different play style to the Red Bulls. “Union have a very direct style of play. They almost always play in a 3-4-3 formation, fight for the second ball and stay very compact. They’re just as dangerous down either wing and have lots of quality in their crossing ability. We have to be strong in the air and man mark their players in the box for when the ball comes in.” The head coach describes the opponent as a, “top defensive side. And they have a weapon: set pieces.” The newly promoted side have already scored 14 goals from set pieces so far this season.

“We want to have a calculated build-up play and press their back line in numbers. We need the whole package: going strong into tackles without the ball, attacking at pace and keeping a strong hold of possession in their half. We need to keep a good balance in all areas of the pitch. And we’re going to need every single payer. Every player needs to play their part,” said Beierlozer.

Everyone knows just how important it is

The previous meeting between the two sides ended in a 3-2 win for Union at the OPEL ARENA back in November. “Union had been on a really good run at the time, there was a lot of hype surrounding them,” explained the sporting director. “After such a game against Leipzig, we are demanding that every player does everything they can to put in a good performance. It’s a game that we can throw everything at and create a much different mood. It’s in our own hands to make things positive again. It’s an important game, but we also know that the season is far from over yet. We’re ready for it. Everyone knows how important it is.”
The fact that the game will be played behind closed doors at the Alte Försterei could be an advantage for the visitors; a stadium where the fans usually create such an incredible atmosphere. “It’s a home game for Union because the opponent has to travel there, but of course it’s not the same situation as it was before the Coronavirus. But it’s the same for every home team now,” said the head coach. “We know that it will be a battle. We have to be ready for the fight, and be better than we were against Leipzig. And then we will succeed,” Beierlozer remains optimistic.