Beierlorzer: "Don't pick the ball up, don't head it."

The team are using the entire training complex in order to keep a safe distance with one another. Beierlorzer says movement training is good, but not comparable with training before the crisis. 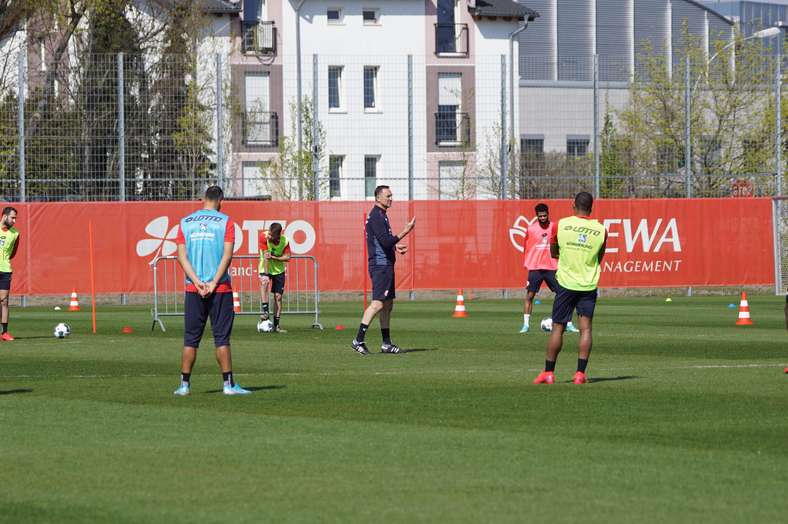 The first team were back and doing some training exercises from Tuesday as their compulsory break at home came somewhat to an end. The team are complying with strict rules from the health regulations: strictly speaking it’s not a real training session,” said Achim Beierlorzer in a conversation with some media representatives on Wednesday. “We’re moving around a trying to use the ball but it’s nothing what what we were doing before the Corona crisis started.”

The ball is back rolling again on the training ground, and with the exception of the goalkeeper Robin Zentner, who picked up a knee injury last time out, every player int he squad is active once again after three weeks at home. The Zerofivers coach himself also spent some time in his Franconian homeland. "We live in the countryside. Every morning I went for a long walk with my wife and the two dogs, then I went to back and worked from home. I had to use my wife’s desk as mine longer exists. We wanted to use the space in our house differently," said Beierlorzer on his domestic situation. “We did a lot of gardening, and I really enjoyed spending some time at home with my family.”

"The word ‘boring’ was used a lot“

Beierlorzer kept in touch with the club constantly, despite being at home, and spoke to the players once a week. "You get to know the players like you’ve never known them before. You start to see that they think about more than just football. Things that fall a bit by the wayside once you get into this business, "said Beierlorzer. The team also constantly spoke with one another using various means of communication.

"The whole thing is unfamiliar and the term 'boring' was used a lot, but it’s not like we need a psychologist now because we’ve had to spend three weeks training individually at home."

Coordinating with the health department

The coaching staff had created strengths and weaknesses profiles of the individual players and generated some training concepts to get around them. "Michael Falkenmayer also dealt with the detailed work that goes into the nine opponents that the team are yet to play. The rest of us looked at our players in order to develop them further, to see what the individual can work on in order to reach a higher level level of performance." There was no concrete preparation for a suspension of the league.

This week the first team will train until 3 p.m. every day until Saturday. "The team will start with the ball. We have set up a small course, and we’ll use our entire area to get far apart. There are four stations at the moment. There is always an athletic and a technical station, plus the shot on goal and a small passing game, all of which include keeping the necessary distance. We presented this concept to the health department, otherwise it would not have been possible. It was extremely important to us, regardless of how large the groups are, to keep the distance between each other. In our concept it’s crucial that we keep a distance of two meters in every training session, in every situation."

Uniformity across the Bundesliga

It was very carefully thought out - how could we train and yet still comply with the rules. "We distributed six players in huge spots across the grounds. We told the players umpteen times and presented it in writing: keep your distance, do not hold a ball in your hand, don’t head the ball. If you do, you’ll have to stay at home. If it actually happened that someone had symptoms, we could ensure that that player had no contact with anyone. It's not easy, I know," said the Zerofivers coach.

But that goes for all clubs

At the moment, however, nobody knows when there will be proper training again. If the season continues, the 05 coach said, "Overall, everyone will know that the situation won’t be great. It won’t be like before, especially if we play without spectators. However, team training must be done If we say we get two weeks of football training before the games start again, then we have to try to make the most of this time and get the team to the point where we can compete at the highest level again. I can say now with certainty that the team is well prepared for the tasks that still lie ahead. But that will be the same for every club in the league.”